14 Reasons Why Skiing is Awesome 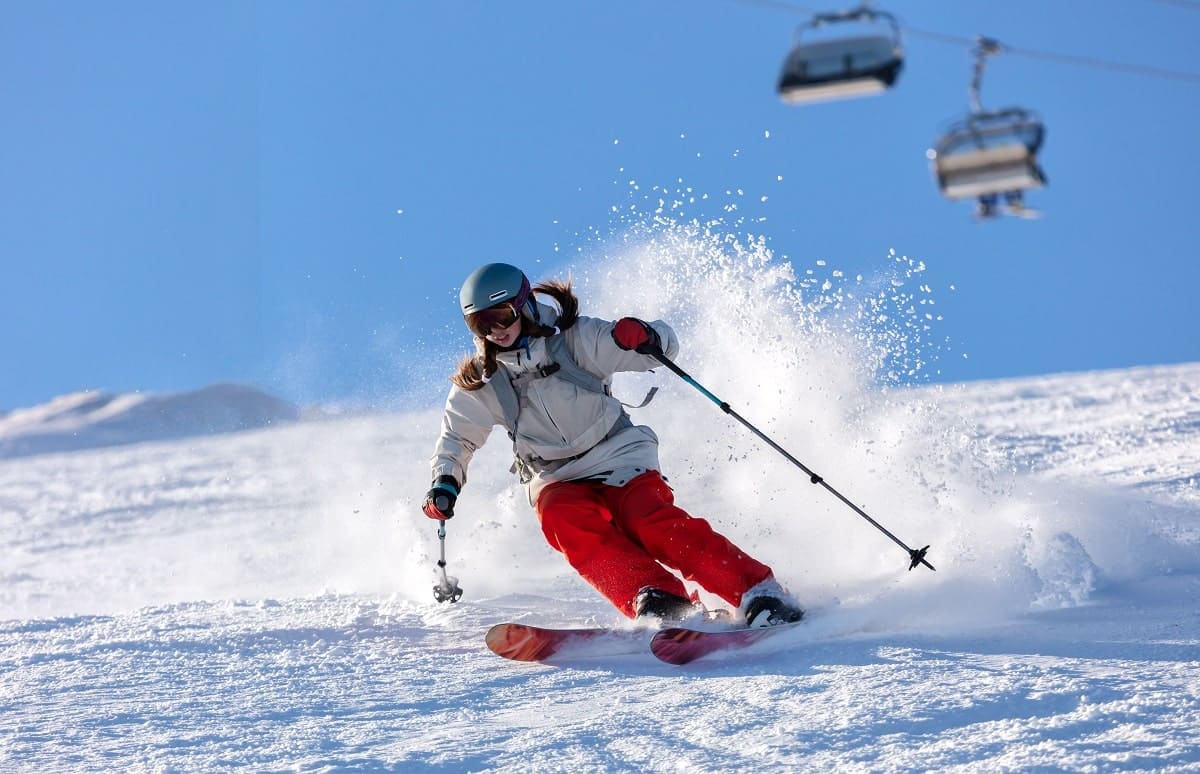 There are an estimated 135 million active skiers in the world. To achieve such popularity the sport has to be offering a range of benefits that keeps skiers coming back each year. But what is the appeal of skiing? Why is skiing awesome?

Skiing requires basic fitness and a range of skills to ski in different terrain. Skiers enjoy staying in often hostile conditions in the relative comfort of modern accommodation. The health benefits of skiing are numerous and include improved cardiovascular function, stronger bones, and joints, improved mood, and better coordination. Skiing is also a particularly sociable activity, often attracting families and groups of friends.

You are outdoors, enjoying yourself and exercising among nature, while surrounded by ever-changing, beautiful scenery.

You are learning an age-old complicated skill that is ideally placed to offer numerous health benefits:

All Round Health Benefits

Skiing gives a comprehensive workout to the muscles in the lower body and the core muscles higher up. Skiing involves plenty of twisting and turning, which subjects the muscles and joints to a greater range of extensions.

The larger muscles of the legs need a steady supply of oxygen to operate efficiently and so the exercise also becomes cardiovascular. The heart and lungs start operating at an increased rate to supply the muscles with nutrients and oxygen.

When you ski your weight is entirely supported on your feet, so your ankles, knees, and hips are relied on to support your body weight. As well as supporting, the twisting movements involved in skiing exert further tension and stress on the joints.

This strengthening of the joints and bones is particularly useful as people get older when osteoporosis and arthritis prevention is key to maintaining mobility.

If you’ve ever felt stressed and gone out for a walk to escape your problems, you’ll probably have noticed that being among trees and nature has a seriously calming effect on the mind.

Spending time in nature lowers stress hormones and reduces feelings of depression and anxiety. Scientists haven’t so far been able to establish exactly why nature has such a calming influence on people, but some suggest it may relate to feeling a part of other living organisms around you.

We all live busy lives and we also need a good break every now and again. Remote ski resorts and mountain towns are cut off from the real world and that’s why most people love them.

See also  Learn To Ski in A Day: A Comprehensive Guide

All this physical activity helps to strengthen your muscles and improve their tone. The physical intensity of skiing is enough to encourage the body to release endorphins. These are hormones that bind to the body’s opiate receptors giving the impression of less pain and a sense of euphoria at the same time.

The feel-good sensation you experience after sustained physical exercise is so enjoyable it is almost addictive. However, as there is no significant downside to experiencing endorphins it’s not a problem.

Being Aware of your Body

Skiing and snow sports in general involve a lot of judgment and quick reactions to deal with situations as they arise. One of the skills the brain has is to learn to coordinate movement almost instinctively.

A good example of this is when a friend suddenly pitches a ball at you, and you know almost instinctively how to extend your arm and open your hand so you can catch it. This is a learned skill called proprioception, which enables you to understand the position of different parts of your body and limbs and how they move.

Skiing and snowboarding involve continually changing balance, direction, and coordination and it’s this skill of proprioception that enables you to make these changes fluidly. The more you ski the better the skill becomes, enabling competitive skiers to carry out intricate acrobatic moves.

Proprioception, unfortunately, becomes weaker with age, probably because older people tend to use their bodies less physically. However, skiing is a great pastime as you get older, to strengthen your proprioception skill.

When we ski outdoors the sunlight on our skin causes a reaction and the creation of vitamin D. Lack of vitamin D in the body has been linked directly to depression symptoms, as vitamin D is directly involved in the regulation of serotonin production. Serotonin is a neurotransmitter, which is involved in the complex biochemistry of mood.

The release of endorphins after sustained physical activity often leads to a natural high, which elevates the mood for several hours.

Frequently, when you ask non-skiers if they would be interested in going skiing, their instant reaction is to shiver and say: ‘But it’s so cold.’ If anything, the opposite is true.

It’s quite practical to go out skiing when it’s less than -4°F (-20°C). Admittedly you’re not going to be sitting around for long but layer up and you will be warm for the whole day.

When different families or groups of close friends get together and share the same love for skiing, you’re pretty much guaranteed to have some good days. Skiing is unique in that it brings together people of all different ages and cultures.

All over the world if there are mountains and snow, there will be people skiing. It’s a great environment to meet new, diverse, like-minded people.

Skiing is a great activity for bringing families together using the combination of shared skills and laughing over the spills. Taking part in a different activity in a different environment tends to pull the family together. Of course, it’s never plain sailing what with the outbursts and the lost gloves but overall, it’s memories for a lifetime.

Traveling on a vacation is tiring for everyone with so much new information around, however, it’s a great way to introduce kids to the different stages of a trip. From having to get to the airport at a certain time, transporting luggage, customs, and discovering the accommodation for the first time when you arrive.

Most kids are naturally curious and want to interact with new faces of their own age. Skiing is a real icebreaker when it comes to starting conversations, whether at the bottom of a run or on chairlifts, most people are positive and chatty.

Ski school for kids is a great opportunity to improve their skills, meet new friends and develop independence from their parents.

Learning about Rules and Boundaries

There are numerous ways to injure yourself when skiing if you don’t follow a few tried and tested rules. You’re never too young to learn even simple advice, such as being aware of other skiers around you, checking your speed, and telling the ski instructor what you think of him!

Skiing offers a great natural combination of excitement and fear. As your skiing technique improves you find the sport more exciting because you can ski better with more skill. More experienced skiers seek out harder challenges that push them to their extremes, while the payoff is that they’ve made a new conquest.

In a ski resort, the whole ethos of skiing is built on improving technique. Graduating from blue runs to red, to black and finally, black diamond runs. However, there is no compulsion to constantly achieve better. Enjoyment, for most people, is just as important, if not more so, than achievement.

So, in skiing, there is always a tension between excitement and fear. Everyone finds their right balance, which is never static but tends to change from day to day, depending on your mood, who you’re skiing with, the weather, etc.

8. You’re Never too Old for a Lesson

It’s often a surprise when you take lessons when you’re older. They say you can’t teach an old dog new tricks. It’s not true, you are so much better at being a student when you have a few years under your belt.

Getting an experienced teacher to check out and comment on your skiing style can be a revelation. Granted it’s not always the easiest thing to hear but often the improvements you will discover will more than makeup for the loss of pride.

In their imagination, most skiers in the run-up to their vacation, have an impossible dream of heavy snow just before they arrive and then wall-to-wall sunshine for the rest of the stay.

Of course, it rarely works out like that but even a good snowfall during the week makes for a memorable time. When grooming’s not possible the whole resort gets turned into an anarchic playground full of shrieking kids, let alone the adults!

Eating a big sandwich and a beer at lunchtime outside a bar, surrounded by the mountains and the antics of other skiers, is a great way to pass an hour and you never even notice it’s freezing cold.

After all those long hours of physical exercise, it’s no surprise you’ve rediscovered your appetite. In Europe, the ritual of hauling yourself back to the chalet exhausted at the end of the day, to fill up on cake and tea would provoke an outcry if it was dropped.

In the evening at a restaurant eating bizarre Alpine dishes with wine makes a great accompaniment to reliving the excitement of the day.

Skiing and snowboarding are great levelers, which makes it much easier to start up a conversation with anyone. People of many different nationalities visit ski resorts, so there are always interesting people to chat to.

You get to hear about their experiences of skiing where they live, which gives you a much more rounded knowledge of the sport. You never know, it might lead to an invitation to swap ski trips – you might be skiing in Japan next year!

It’s not unusual for skiers and snowboarders to find new partners. You already have a shared interest to get the conversation going, you never know where it might lead.

The term après ski first appeared in the French Alps in the 1950s as skiing tourism started to become more mainstream. Resort designers soon cottoned on that some visitors were less interested in skiing. Consequently, a whole parade of alternative winter activities evolved to entertain that market.

Going to the bars and nightclubs in the resort is an established part of après ski in most countries. This usually starts as skiing finishes, with skiers packing out bars on the runs home. Alcohol flows and the dancing that quickly follows progress to the tables.

Ski boots and beer-soaked wooden tabletops aren’t ideal for grip, as a guy discovers, who was just getting into throwing some shapes. His buddies didn’t know he could do the splits – truth be told it was news to him as well.

13. Other things to do in the Resort

It’s very easy to get completely caught up in the trappings of a newer resort. Go out skiing first thing, back in the afternoon for a snooze, drinks before dinner, and many more after, sleep, rest, repeat.

However, dig a little deeper into the history of the town and you’ll probably discover what really makes the place tick. Maybe an old church, a museum with photos of the village 100 years ago, the year of the avalanche, or the river bursting its banks.

Most people are sociable but to differing degrees depending on their personality type. However, even the most sociable person sometimes just wants to get away for some peace and quiet on their own.