What Are The Extra Poles In A Ski Slalom Course For? (Boring Reason They Exist) 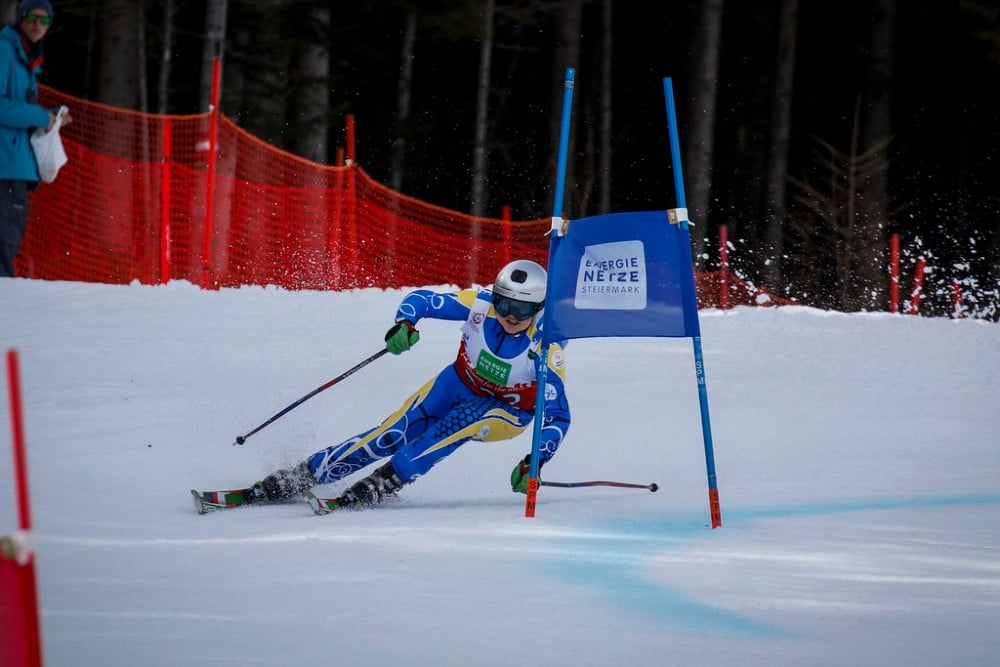 Photo by Special Olympics 2017 licensed under CC0 1.0. We may collect a share of sales or other compensation from the links on this page.

You’ve probably seen slalom skiers weave down the mountain at incredible speed, usually hitting the closest pole as they go. However, have you ever wondered what the extra gates and colored flags in the skiing slalom course are for?

A ski slalom course requires skiers to go through “gates” usually formed by two poles. The skier usually only touches the innermost pole. The extra pole on the outside simply makes up the other half of that gate.

When you first start to learn to ski, you probably see other skiers race down the mountain super-fast and want to be able to do that. As you start to get a bit better at skiing, you will appreciate the difficulty of skiing fast and controlling your turns.

Skiing slalom is the ultimate test of speed and agility, which makes it one of the best Winter Olympic sports to watch.

What Is A Skiing Slalom Course?

Officially part of the Winter Olympics, slalom skiing is one of the five alpine skiing events. The five events that make up alpine skiing include Slalom, Giant Slalom, Combined, Downhill, and Super-G.

In the slalom course, skiers must pass through gates and make it to the bottom of the course within the fastest time. A gate is usually made of two poles, both the same color, either red or blue. The color of the gate alternates, starting with red as the first gate.

See also  What To Wear Under Ski Pants? (Base Layers Explained)

If you miss going through a gate you will be disqualified as you need to ski between the two poles of all of the gates. The course length and vertical drop vary between men and women. In the Alpine skiing discipline, a standard Slalom course consists of 55 to 75 gates for men and 40 to 60 for women.

How Does Slalom Skiing Work?

When you first start slalom skiing, you aim to pass through each gate and make it to the bottom without missing one. There are typically two poles that are between 4 and 6 m apart that make up a gate.

Once you start getting better at skiing, you will want to increase your speed down the course. This will mean skiing closer to the gates like you see the professional skiers doing at the Olympics. They are typically doing something called cross-blocking.

Passing through a gate correctly means that the skier has their skis and boots between the two gates. With cross-blocking, the slalom skier is allowed to have their body across the top of the pole or even over it, as long as their skis and boots are between the gates it doesn’t matter. This is why you will often see skiers pushing the gates down with their arms or hands, or even using their shins.

It can be somewhat of a dangerous sport between hitting poles and flying down the mountain at high speeds. For these reasons, competitive skiers will be seen wearing shin guards, arm and shoulder padding, handguards, and a helmet with a chin guard to protect them when they are hitting the gates.

See also  What is it Like Skiing a Double Black Diamond? (3 Hardest Runs in The World)

In larger slalom courses, it is also quite common to see skiers get some air over parts of the course, just adding to the excitement and danger of the sport.

The way that slalom courses are scored will depend on the competition. Usually, skiers will get multiple runs through the course, and the person with the fastest time wins. The Olympic website notes that skiers will have to pass through two courses, and “the competitor with the lowest combined time across the two courses is deemed the winner“.

What Are The Extra Poles For Slalom Skiing?

Depending on what type of slalom course you are watching, you may either see:

When skiers are navigating down the slalom course, they usually knock over one of the poles from each gate to find the fastest path down. So, when watching ski slalom, the extra poles are simply the other half of the gate.

So, when watching competitive skiing, you won’t likely see racers going very close to the outside pole very often. So, what are these extra poles necessary?

Well, yes. It is written in the rules that competitors must pass between the gate. Technically, you could ski further away from the inner pole and position yourself more centrally within the gate; however, it will never be the quickest path, and you won’t see it in competitive skiing.

So, since skiing has progressed so much since it was introduced into the Olympics in 1936, keeping the extra pole on the outside is more of a tradition at this stage.

Furthermore, when you are watching a slalom race on tv, it can sometimes be difficult to see which gates the skiers are aiming to go through. Having multiple poles as well as alternating colors can be a nice visual for viewers to see the skiers going through the gates.

While skiing a slalom course, skiers are required to pass through a series of gates. Skiers must have both of their skis in between these two poles however, as the sport has progressed and skiers have become quicker, the shortest path is the one closest to the inside pole.

As such, the extra poles that you see in a skiing slalom course are the other half of the gate. These days, the point of the extra poles is in reality not necessary, however, it is written in the rules that competitors must ski between the gates. They are also helpful for spectators to see where the course is going.