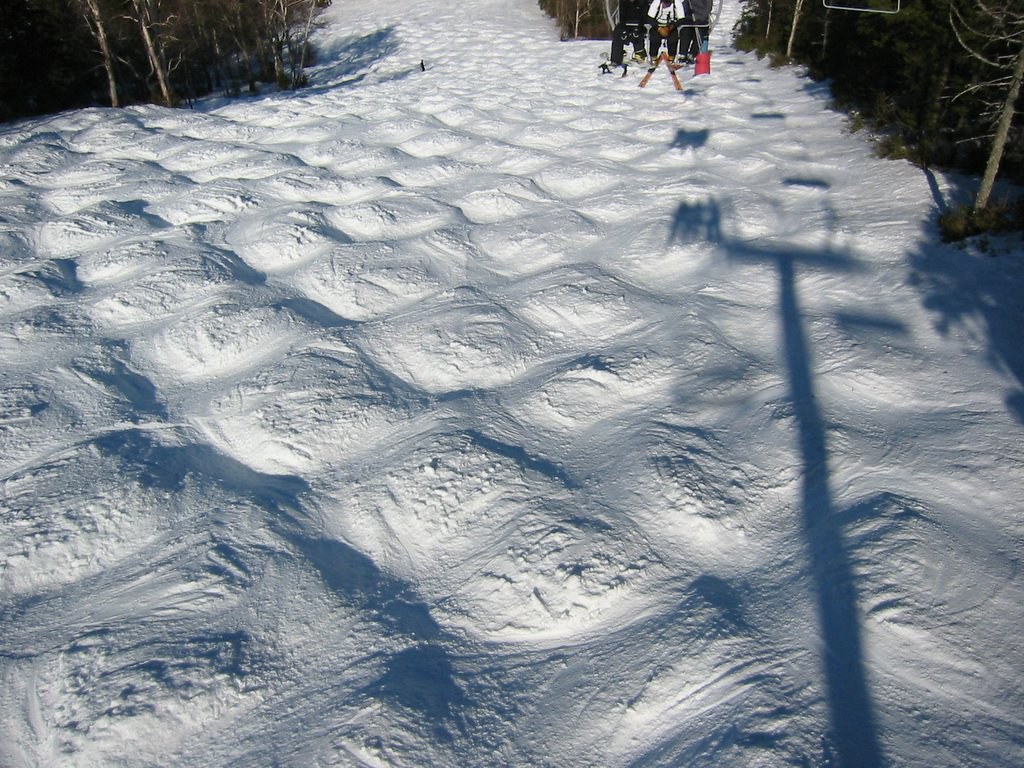 Photo by sf-dvs licensed under CC BY 2.0. We may collect a share of sales or other compensation from the links on this page.

Moguls are a series of large, round compacted piles of snow that form naturally on a run. As skiers descend, they often take the same route, pushing the snow into mounds as they turn. Eventually, unless the run is groomed, the whole piste becomes covered in moguls, known as a mogul field. But what is the best way to get down a mogul field?

Moguls naturally form as compacted piles of snow on a run. Skiing through them requires concentration and skills, where the upper body remains stable while the lower body is fully flexible. There are numerous techniques, which will help mogul skiers to enjoy and negotiate mogul fields.

The word mogul sounds like it must have Eastern origins, but is in fact a word in a German dialect, mugel, which means hillock or small hill.

Moguls are now an Olympic discipline where competitors take on a slope of moguls at about 28° and 235 m long. The moguls are spaced about 3.5 m apart, which enables the best competitors to complete the course in a knee-pumping 30 seconds.

Tackling a mogul field when you only have a little experience can be hard work. However, using a few straightforward techniques it’s possible to transform your thinking about moguls from being an irritating necessity to being an enjoyable challenge. If possible, try these techniques on smaller moguls before moving on to more challenging slopes.

If possible, practice on the mogul field when there has been a small amount of fresh snow.

The more forgiving surface will make turning around the moguls easier, and slow you down at the same time, letting you build confidence.

2. Choose a line down the Field

When you approach a new mogul field take a moment to survey the layout of the moguls below. Choose a point or object in the distance and start down the field, aiming for this object and turning where you need to keep in the right direction.

Ideally, you should be able to negotiate a mogul with each turn, but it depends on the layout of the field.

See also  How Much Snow Do Ski Resorts Need?

At first, it might be difficult to keep momentum, so stop if you need to and take the section in stages. Use the back and the top of the moguls for braking. Slide down the back and dig your edges in to slow yourself and, for the top, stop with a sharp hockey stop to shed momentum.

If you keep your lower body, from your hips to your feet, loose you will find it much easier to absorb the up and down terrain around each mogul. Additionally, keeping the upper body stable and tilted forward slightly will help to maintain control.

Normally when skiing on groomed runs the upper and lower body work together as you move through corners. However, on moguls, you are giving independence to your lower body while keeping the upper body stable, which may feel strange at first but with more experience will feel like the obvious stance to take.

Keeping a good sense of balance throughout the extreme ups and downs of moguls is hard at first. Initially, there is a tendency to lean back but this will increase speed and diminish control at the same time.

Think in terms of positioning your hips over your feet to get the best-balanced stance. At first, it may feel like your boots are further back than usual but stick with it until it feels normal.

5. Use Hands and Poles for Balance

Negotiating moguls can throw your body and legs in different directions so any extra assistance in balance is a bonus. By keeping your hands out in front of you and poles vertically you will have a lot more control if you need to make corrective movements.

Similarly, by pole planting on each mogul, your confidence will build faster. Pole planting also helps in making turns, where the action of making a pole plant demonstrates a commitment to the turn. This leads to rhythm and fluidity, where you start to negotiate moguls more by intuition rather than a collection of moves.

The rhythm you find best for one mogul field may be completely different in another. It’s down to the steepness of the slope, how large the moguls are, and how the moguls are spaced apart.

This might feel very mechanical at first, but it quickly educates your brain into naturally finding the rhythm of a mogul slope. The more you find the rhythm the more relaxed you will feel, which will be reflected in how you ski as well.

This is a useful technique for beginners, who often lurch from one mogul to the next and then stop. By using the counting technique, you can extend the number of moguls you accomplish.

7. Use the Top of the Mogul

When it comes to negotiating moguls, most skiers completely avoid the top. However, this is a very useful part that can be effectively used in several maneuvers.

The snow right on top of a mogul is usually soft and can be used to shed speed with a hockey stop or to turn onto the next mogul. Using the top of the mogul to turn is easier than normal because only a short section of the ski is in contact with the snow.

Most skiers tend to corner through the troughs of the moguls but the drawback here is the snow will be heavily chopped and you will quickly pick up speed as well. An ideal compromise is to use a combination of top and bottom cornering, which matches the layout of the moguls.

There is no right or wrong technique for negotiating moguls, it’s just what works for you on the mogul field you are skiing.

See also  How Much Shin Pressure To Apply in Your Ski Boot?

If you watch an Olympic mogul skier flying down a run, you will notice his upper body is still, but his legs are articulated to turn in either direction, while at the same time the play in his legs is used to absorb the moguls. The only way to achieve this is by being relaxed but alert.

9. Keep your Skis together

When skiing on groomed runs and carving it’s normal to have your skis slightly apart to maintain a relaxed stance and good balance. However, when skiing moguls, it helps to keep your skis closer together, mainly because space is at a premium around moguls, and you will be making a quite short radius turns.

You can easily practice these short radius turns on a groomed slope, with a succession of short turns leading around imaginary moguls.

10. Use your Legs as Shock Absorbers

If you imagine your thighs, knees, and lower legs as a pair of shock absorbers, which compress as you cross a mogul, and then extend to full-length on the other side.

This movement doesn’t require any power from your muscles, it is simply a reaction to the surface you are skiing down. With practice, using your legs as shock absorbers will become second nature, so long as you don’t stiffen up.

As you exit a mogul try exerting extra pressure on your skis as you go into the trough to control your speed. With practice, you will discover your skis almost find their own way across the mogul. You need to start thinking of moguls less as obstacles and more as a resource to make different movements.

When all is Lost

Everyone gets caught out by moguls now and again, maybe you’re tired, it’s a bad day or there are too many people. If you ever lose control partway down a mogul field and start being bounced around, then turn sideways and cross the slope laterally, while gradually steering uphill. This will quickly reduce your speed, so you can stop and make a plan.