Skiing While Pregnant: Everything You Need To Know 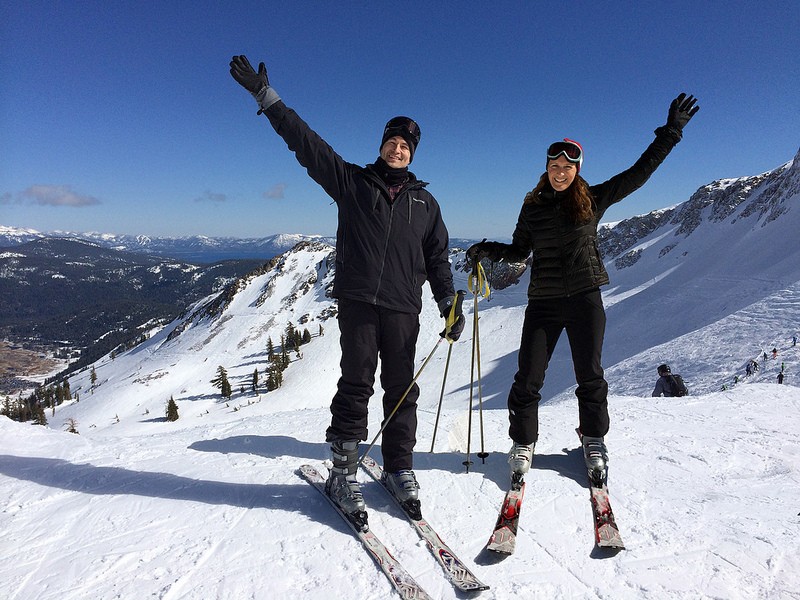 Photo by Nicki Pogue. We may collect a share of sales or other compensation from the links on this page.

Pregnancy is a unique and exciting time for parents. However, it also means that the mother may have to forgo some of her interests and hobbies for the safety of the baby. This has led many women to ask whether or not it’s safe to ski during their pregnancy.

Whether or not you should ski during your pregnancy depends mainly on how far along you are in the pregnancy. Skiing can relatively safe for some mothers; however, there are many risks to take into consideration before getting on the chair lift.

When Skiing is Safe For Pregnant Mothers

Doctors recommend safe forms of exercise during pregnancy. Keeping active throughout the pregnancy, especially if you were regularly exercising beforehand will help improve mood, posture, and increases energy. It can even relieve symptoms like backaches, swelling, constipation, and bloating. But what about skiing? Is it ever safe to ski during your pregnancy?

While most doctors and Ob-gynes recommend staying off the slopes, many mothers have found safe ways to continue enjoying skiing throughout their pregnancy. Some even ski up to 7 ½ months pregnant. But as with all activities when you’re pregnant, there have to be more restrictions when you’re skiing.

For example, for skiing to be done safely during pregnancy, you have to know your limits and abilities on the slopes. Now is obviously not the time to test your limits and try new runs.

Doctors recommend that if you are going to ski while pregnant, it’s best to stay on groomed trails that are below your regular skiing abilities. So if you’re used to skiing black diamond trails, stick to the groomed blue or green trails during pregnancy.

Another factor to take into consideration is that by the 12th week of pregnancy, the uterus emerges from the protective shell of the pelvis, making trauma from falls and sudden impacts much more likely. Therefore, skiing during the first half of the pregnancy is much safer than skiing for the second half.

What Risks Are Involved With Skiing While Pregnant

There are many risks involved if you choose to ski while you are pregnant, especially if it is late into the pregnancy.

Doctors are most concerned about force trauma that could affect the baby. Even the most experienced skiers have accidents. But the likelihood of falling dramatically increases when you are pregnant. Why? One reason is that the extra weight in the belly can throw off your balance since your center of gravity has now changed.

Another reason is that because pregnancy takes a physical toll on the body, pregnant women are more likely to tire out faster and feel fatigued, making it easier to fall.

Even your tendons and ligaments can be affected by the change in hormones during your pregnancy. They can become much looser due to a hormone called relaxin, making it more challenging to be in control while skiing.

Why is falling such a concern? Because of the sheer force that occurs when the body suddenly comes to a stop, and the body’s organs keep moving. It could happen if you were hit by another skier or lost control and hit a tree. When the body experiences a shear force, the uterus and placenta can separate, resulting in a miscarriage. This can happen at any point in the pregnancy.

If you are in the second half of your pregnancy, falling or crashing could bring on early labor resulting in premature birth. That is why doctors are especially insistent that you don’t ski late into your pregnancy.

What does the altitude of the mountain have to do with the safety of the mother and unborn baby? While it is less of a concern to doctors than falling is, altitude sickness could also affect your baby.

See also  What is Après-Ski? (14 Best Places To Ski Then Drink)

Before you were pregnant, a slight change in altitude probably didn’t affect you. However, because of the hormone changes you experience during pregnancy, you may find that the sudden variations in elevation leave you feeling nauseous. The lack of oxygen at high altitudes puts stress on your organs and, by extension, your baby.

Regardless of how comfortable you feel on the slopes, one factor you cannot control is how well the people around you are skiing. It’s not uncommon for a beginner to lose control and run into another skier. Unfortunately, you don’t always see them coming and can’t always get out of the way in time.

How to Stay Safe and Still Enjoy Skiing

Despite all the risks that come with skiing when pregnant, many women are still able to enjoy the sport. By following these precautions, the risks become much lower.

When Skiing Is No Longer Safe

It is essential to know your limits and those of your body. Remember that those limits change when you become pregnant. The further along you are in your pregnancy, the more risks that come with skiing.

If you do choose to ski during your pregnancy, stopping before the second half of the pregnancy is recommended — the risks of injury to you and your baby skyrocket after 4.5 months.

Health problems such as high blood pressure, bleeding, or symptoms of early labor are serious signs that you should take a break from skiing altogether this season.

FAQ About Skiing When Pregnant

Q. What positive effects can I expect from skiing during the first half of my pregnancy?

A. Like all forms of moderate exercise, skiing can increase your mood and emotional stability during pregnancy. It can also contribute to a deeper, more restful sleep as well as improving your energy levels, strength, and stamina.

Q. How can I balance the amount of time I spend on the slopes with the needed rest that comes with pregnancy?

A. Pace yourself. It may be a good idea to ski for half the day instead of a full day, or to take days off in between skiing on your vacation. Rest is just as crucial as exercise during pregnancy.

Q. How can I prepare my body for skiing during pregnancy?

A. With less energy and more weight, your muscles will probably wear out much faster skiing while pregnant than they did before. To reduce the fatigue, you feel on the slopes, regular exercise at home the muscles you use while skiing. This mainly includes squats and lunges, as well as side reaches and bends. You will feel more in shape and less tired by the end of your day.

Whether or not you decide to ski while pregnant is entirely dependent on your skill levels as well as your health condition during the pregnancy.

Most doctors and Ob-gynes do not recommend skiing while pregnant erring on the side of caution. This is due to the number of risks involved. However, many women enjoy safely skiing well into their pregnancies.

So if you’re longing to get back on the slopes, talk to your doctor about it, listen to your body, and remember there is a safe way to do it. You can continue to enjoy the fresh mountain air and exercise while still putting the safety of your baby first.