Do Slalom Skiers Really Hit The Flags or Gates On Purpose? 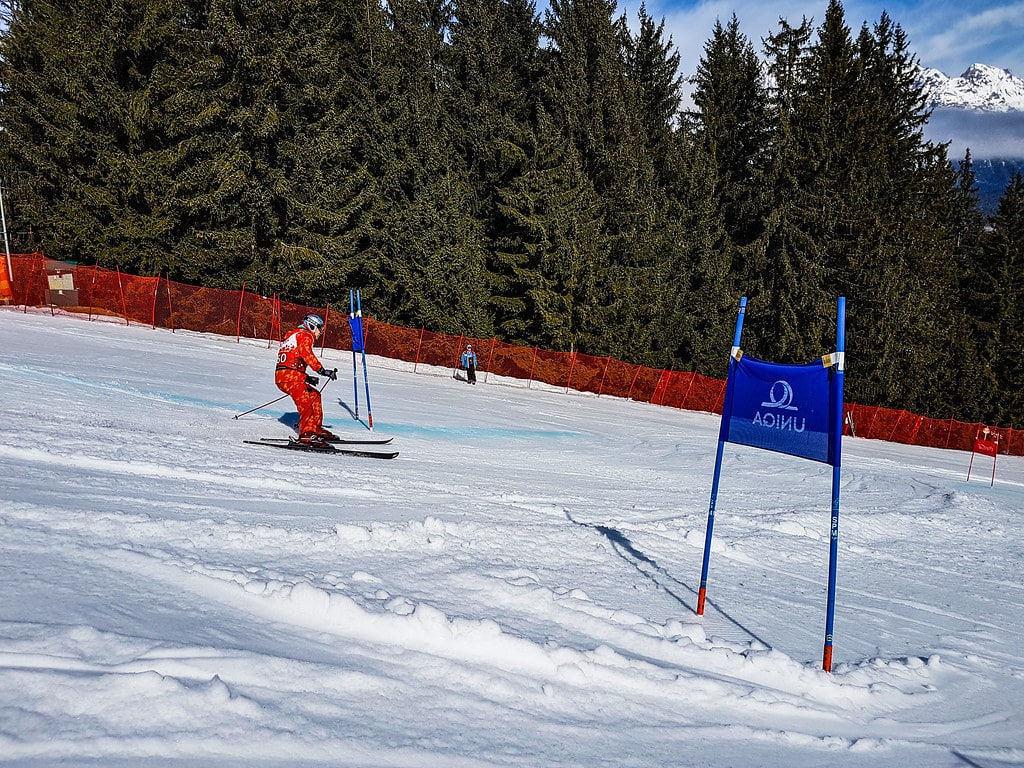 It’s a funny old thing, watching talented skiers hitting the gates all the time on the way down the slope. It looks like they are failing, like they are doing something wrong. That’s not what us actually happening.

When competing, the goal of slalom skiing is to get to the bottom of the mountain as fast as possible. To do that, skiers have to find the tightest lines. The fastest route between two points is the straightest line. This definition means that a bid for that line will entail touching some flags on the way down. Hitting the flags in slalom skiing is therefore expected.

Do You Remember The First Time?

When the skiing and snowboarding bug takes over, there is very little that one can do. It overrides many things in a person’s makeup, including common sense, prudence and financial acumen. This exercise is all done in the process of finding better powder, increasing skill levels and gaining more experience. People spend their inheritance or the University Fund on fun and games on the slopes.

On top of this, people get addicted to ski magazines, television shows, and televised live Winter Olympics. They’re all part of the guzzling snowman-shaped Pacman eating up your savings for the need of a good time on the slopes.

When the bug hit, I found myself spending a lot of time watching sports channels for skiing and snowboarding footage. It was during these honeymoon days of my love affair that I witnessed a downhill race where the riders just kept on hitting the poles over and over again.

“These guys are terrible,” I thought. “They shouldn’t be competing at this level.”

The more I watched, the more irritated I became. If the skiers didn’t even have the basics, like avoiding the flags, then why were they competing? Every flag hit was another annoying jar to the senses and sensibilities.

See also  Do All Ski Boots Fit All Skis? (Are Ski Bindings Universal)

Downhill skiers of any discipline want to get to the bottom of the hill in the shortest time possible. This concept entails the straightest line from start to finish. Skiers envisage a straight line on their runs and then try to stick to that imaginary line as much as possible. They reach a state of zen, of free flow, and the flags are just a minor hindrance.

When there are poles, the only way to keep your line as tight as possible is to hit each one on the way down. It’s almost proof to the riders that they are going as straight as is humanly possible.

Actual injuries from the poles themselves are rare, but more on that later. The problem lies in the fact that sometimes the riders, who are travelling at tremendous speeds, get knocked off-balance by a gate collision. As a result, they are sent careening down the slope and into a slam.

The first gates were wooden, and since then, they have been through numerous forms. Currently, they are made of sturdy plastic, with a folding hinge at the bottom so that they have some ‘give’ when connected by a skier. Still, as any slalom skier will explain, the poles are sore.

Moderating elements on pain levels include adrenalin, as well as the fact that the faster you’re going, the less painful it is. Some skiers are going so quick that they feel absolutely no pain until they stop. Then they are overtaken by a world of pain, that eventually catches up to them as welts and bruises start showing all over their arm and hands. Regardless of speed or method, hitting the gates is extremely painful, and skiers are often in all sorts of agonies post descent.

Therefore it is advised that all skiers who are going to compete and hit the gates should beef up with all the necessary padding. Without and arm and shoulder padding, a skier will have a black and blue arm after one race, but padding removes all this.

So what all do the slalom skiers use? The bare minimum is shin pads, handguards, wrist guards, helmets with chin guards, shoulder protection, and arm protection. Still, one must remember that athletes do not want bulk, and every single extra piece of padding adds to this and possibly slows skiers down a few milliseconds. So there are some versions of thinner padding, but the more lightweight padding gives less protection, so it’s a bit of a problem for skiers. Padding equals less pain, but padding also equals less speed.

The helmets are probably the most crucial though, with chin guard and more. Head injuries are never going to be popular.

Respect is always due when people get hurt in the process of doing their sport, of competing, of wanting to be the best in the world. There are many examples, and every game pushes the pain barriers apart from maybe bowls and darts. Hitting the gates is really painful, and skiers get seriously injured in the way of deep bruises and the occasional broken bone, yet still, they persevere and keep going, hurting themselves in the bid for speed and victory. Much respect.

See also  Snowboarding vs Surfing: What is The Difference?

Five Takeaways From Hitting The Gates

Now that we have explained all there is to know about hitting the gates. Hopefully, you won’t experience the feeling that highly skilled and trained professional skiers are making so many mistakes when gunning for the win. They are merely trying to extract and utilise as much speed as possible on a downhill run littered with tricky obstacles placed to mark out the track, as well as to slow them down. Hitting the gates is what they do.