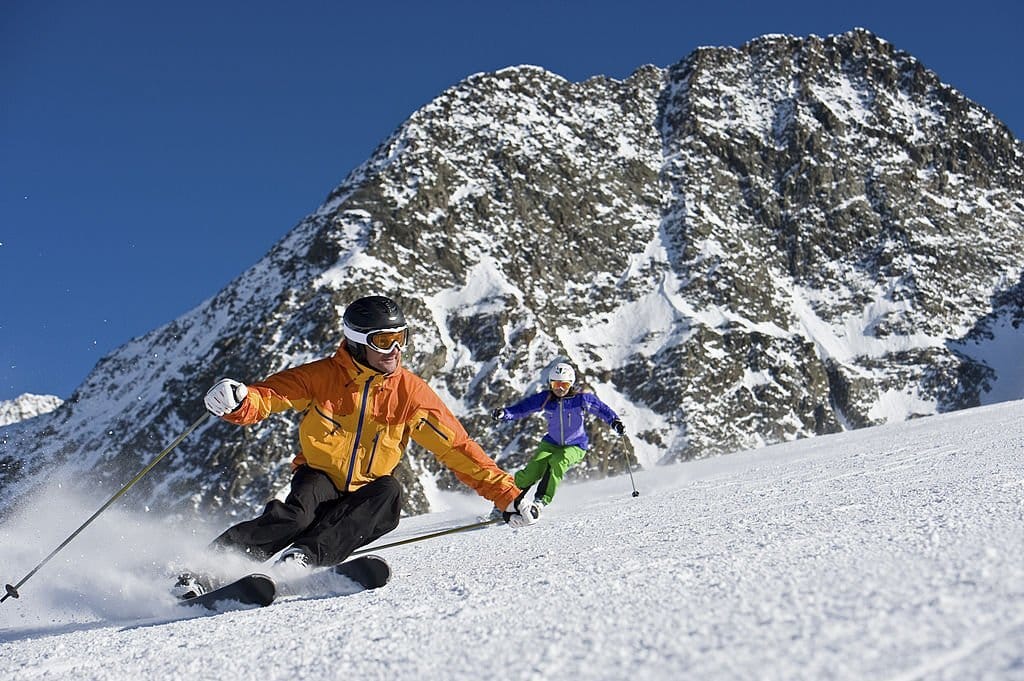 Whether downhill skiing at the Winter Olympic Games or slowly navigating down a difficult slope at your local ski field, every skier makes turns to get down the slope. But, have you ever wondered what the difference is between skidded turns and carving?

The main difference between skidded turns and carving is that while the back end of your ski will skid a little during a skidded turn, carving is where tilt your skis onto the edge throughout the turn so it cuts through the snow in one clean arc.

What Is the Difference Between Skidded Turns and Carving?

Skidded turns (also called parallel turns) are when your skis stay relatively flat on the snow when you are coming into a turn transition and you push the ski through the turn. During this turn, you slow down by putting pressure on the ski as you go around the corner, throwing up snow as the back of the ski skids out.

Carving allows you to increase your speed throughout the turn, pushing you across the mountain, while skidded turns helps you to slow down.

Why Do Skiers Make Skidded Turns?

When you are learning to ski, turning is one of the most important elements. Adding turns into your skiing not only allows you to control the direction that you want to go in but also to control your speed and avoid obstacles.

Learning how to make skidded turns (also known as parallel turns) is a great way to go from a beginner to an intermediate skier. Skidded turns will allow you to go down steeper slopes, take more pressure off your legs, and slow down and stop more easily.

When beginner skiers learn how to make turns, you start by bringing your tips together in the “pizza” shape and leaning in the direction that you want to go. The simplest way to learn how to make skidded turns is, when you are making a turn with your ski tips together, lift up your mountainside ski and move the back ski in line (parallel) with your other ski.

After practicing this, you will make this movement a little more subtle, and progressively over time, you will learn how to go into a skidded turn, skipping over the “pizza” motion altogether.

Read our full guide on how to ski skidded turns (US) or ski parallel (Europe).

So, Why Do Skiers Carve?

One of the best feelings in skiing is when you are moving fast, carving beautiful tracks, and feeling as if you are floating down the mountain. In addition, the carving is generally used to maintain control during ski racing or powdered conditions.

As we talked about, skidded turns will typically slow you down as you go around the turn. However, carving allows the skier to build more pressure and increases your momentum throughout the turn as well as feel higher g-forces.

Staying on your edges will also reduce friction and the skis will help push you across the mountain. This is why carving is one of the best techniques for racing as your speed will increase during a carving turn.

See also  Are Ski Season Tickets Worth it?

During a race, skiers aim to spend as much time as possible carving to maximize speed down the race course. As they are not slowing down very much, you won’t see as much snow powder thrown up during a carving turn behind a skier compared to skidded turns.

What Can You Do to Learn to Carve?

Carving is the next step in the natural progression if you have mastered skidded turns and want to take your skiing to the next level. Learning how to carve will allow you to increase your speed while maintaining control as you ski down the mountain.

It is important to note that very few turns are purely carving the entire time. A good turn will include a carving component and a great skier will spend more time carving than any other turn phase.

1. Getting Used to the Feeling

The first thing you want to do is get used to rolling your ankles, legs, and knees onto the edge of your skis.

First, start by standing on the flat and rolling over onto the edge of your skis on both sides. The aim of this is to learn your edge angle and get used to the edge feeling needed for carving.

Next, stand on the side of a slope, with your skis across the fall line, and try skiing directly across and slightly down the mountain, maintaining the edge position. If you can feel your skis bite on the edge of the snow rather than slide, this is the position you want to be in.

When you start making carved turns, you will find that you will pick up a lot of speed going into the turn. It helps to start learning on a wide, green run where you have a lot of space and it isn’t too steep.

See also  7 Tips to Keep Your Feet Warm While Skiing

As carving will naturally allow you to increase speed, a wide stance will help you maintain stability. Modern carving skis have a radius along the edge of the ski, allowing for the ski to cut into the snow.

As you are carving, the distribution of your body weight should be transferred to the outer ski. This may feel counter-intuitive at first, but when you are carving you should almost be able to lift up your inner ski (mountain side).

A good way to practice this is by skiing big turns, slowly, and practice lifting your inside ski off the ground as you go around the corner.

3. Putting It All Together

Remember to bend your knees, stay low when you are carving, and allow your outside leg to lengthen as you get deep into the turn. Your ankles and knees will need to bend a lot to get on your edges as you start making deeper, faster turns.

It can also be helpful to watch other skiers carving, to help you to understand what you are aiming for:

Learning how to carve is not easy. It will take a lot of practice and time to learn how to carve. So, take your time, build up to it, and enjoy the learning process.

Skiers use a variety of turns during their runs depending on the conditions, the terrain, and various obstacles. Skidded turns are often used when a skier is looking to slow down during a turn as they traverse down the mountain, whilst carving is on the edges of your skis, increasing your speed throughout the turn.