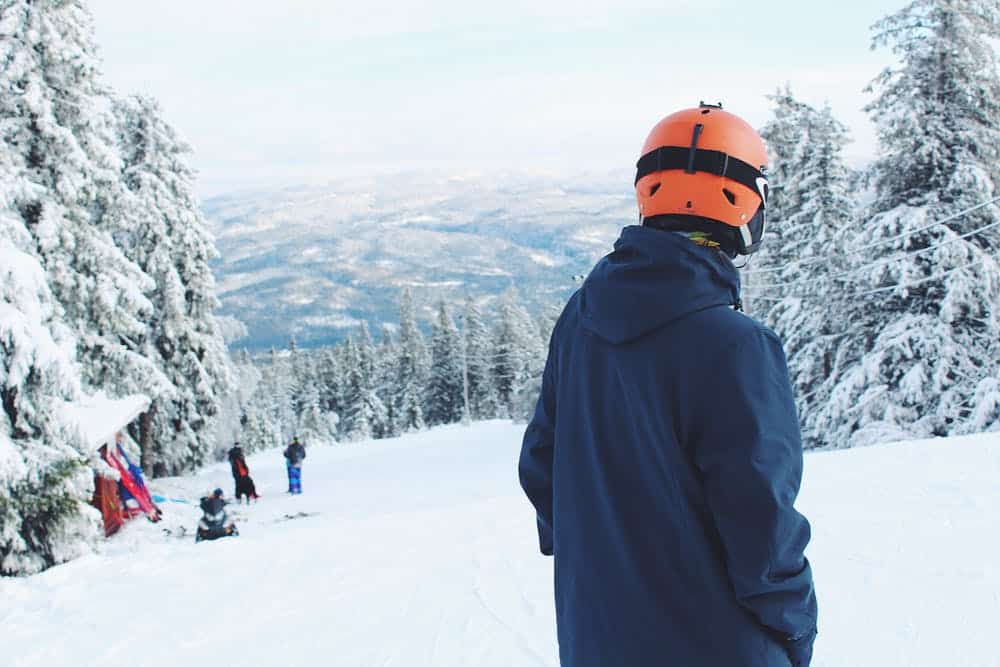 The question that every first-timer wants to answer...(I did too when I first started.)  “…I’m taking up a new winter sport, should I pick snowboarding or skiing? –

What is more fun & which is easier to learn? In this guide I’m delving into each sport, so you can find the right path for you.

Both sports are great fun, and beyond the classical rivalry are two incredible ways of exploring the mountain. Each sport is unique & they both draw so many passionate people to their ranks.

If time & and money were no object, learning both skiing & snowboarding would be a great option. The reality is; that you have a limited number of days and unless you’re a lucky season pass holder, you’ll want to maximize your time on the slopes.

Which Is Easier To Learn?

The initial learning curve is pretty fast. The most natural mode of transport we ever learn, walking, involves independent leg movement. So does skiing.

Many would agree that initially, it’s easier to pick up skiing than it is snowboarding. In most cases, you’ll be on your feet and on your way down the baby slope faster on skis than on a board.

That’s because skiing is more intuitive for beginners. In skiing, your legs are apart, so you’re able to move each leg independently. This means that at slower speeds, you’re able to balance faster and stay up off the snow.

Skiers face forward with their legs parallel in a straight-on stance. Many beginners feel this stance to be more natural and easier to adopt.

How Long Does It Take To Learn To Ski?

There is no across-the-board time frame for learning how to ski, as it depends on your prior experience with sports that involve balance, agility, fitness, and confidence. [ main factors that impact learning ]

Here Is A Rough Timeline For Learning To Ski:

You’ll be working on your beginner turns and getting to grips with how your body and weight affect your skis. You’ll be falling over less.

You’ll be getting more fluid in your turns and working towards the elusive parallel turn. You’re pretty good at getting on and off lifts but you still trip over your skis every now and again. Your good at turning, but that one ski just never gets into line quick enough.

You’re cracking the code. You can parallel ski & you can hockey stop (no pizza anymore). You’re not scared of fast skiers around you and you can comfortably turn at speed.

You’re working on tighter parallel turns and intermediate skills. You’ve come so far, but you realize how much there is still to learn.

✓ Easier to pick up the basics.
✓ Beginners spend more time on their feet.
✓ Straight-on stance feels more natural.
✓ More visibility of the mountain facing downhill.
✓ Easier to get on and off lifts.
✓ Balance learned from other sports transfers more easily.
✓ Stay off the snow – no need to sit down to remove or put on skis.

✘  New skiers easily trip over their skis
✘  Mastering the technical aspects of skiing takes many seasons.
✘  You have to learn how to carry two poles and two skis without knocking someone out.
✘  More to drop when you’re on the lift.
✘  You can’t really go off-piste effectively into powder with beginner piste skies.
✘  More difficult to stop for beginners. Leaning back doesn’t help, you have to turn to the side and angle your skis.

I MUCH prefer skiing. I love not having to strap into my board every run. I feel faster and in control. Granted, snowboarding is fun and feels very fluid once you get the hang of it.

Snowboarding began in 1965 in by Sherman Poppen, who fastened two skis together for his daughter.  Despite being a  latecomer to the scene, it’s now nearly as popular as skiing.

Snowboarding is all about edges (your heel and toe edges) – getting to grips with this can be tricky to beginners. Most people agree that learning to snowboard takes a bit longer than skiing. It’s hard to get to grips with and takes more patience.

Here’s what I’ll say – skiing is MUCH easier to learn and have fun with your first few times. Learning to snowboard is pretty miserable. I’ve heard this same thing from people who tried snowboarding first and skiing second – skiing is a lot easier to pick up

username: Bjankles / from reddit thread: Do you prefer skiing or snowboarding? Why?

In snowboarding, you are attached to one board (a monoski) with both legs. It’s more restrictive in this way (Snowboarders would argue that you are more connected to the snow).

New boarders have a harder time staying on their feet than skiers. You’ll spend much of your first day on your bum.  In general, new snowboards fall over more often.

Balancing on the board, stopping, and learning to turn to take many days of practice. Once you’ve got these basics down, more advanced edge control and skills can be acquired faster than with skiing.

I’ve been skiing since I was five but I decided to learn snowboarding ten years later and never looked back. I prefer it to skiing because it requires more movement and I find myself working my entire body.

username: Anton338 / from reddit thread: Do you prefer skiing or snowboarding? Why?

How Long Does It Take To Learn To Snowboard?

See also  Do Last Names That End in -Ski Relate to Skiing?

To confidentially carve your way down the piste takes longer.

To confidently carve…It took me a 2 weeks plus three quarters of a season . I had skied before since I was young. The two weeks vacations got me to the point where I could ride acceptably on blues and reds; and ride like a falling leaf on blacks.

There’s less to screw up on one board, than two boards and two sticks.

✓ Once you have the basics, it’s easier to progress.
✓ Boarding on powder is “.. one of the greatest sensations known to humankind.” Martin Bell
✓ Easier to go off-piste / backcountry on a beginner board.
✓ No ski poles to hold.
✓ Snowboard boots are easier to walk in and renowned for comfort.
✓ Ski buddies can pull you on the flat!
✓ Just one board to carry, easier to walk around the ski village
✓ Less likely to suffer leg injuries.
✓ Easier to stop as a beginner, by failing backward.

✘ It takes longer to learn.
✘ Don’t expect to stand and board right away.
✘ You spend lots of time on your butt when you’re learning to board.
✘ You’re always strapping in or out of your boots to get on and off ski lifts.
✘ It’s harder to move on flat ground without poles. You have to unbind one foot and use it to propel you.
✘ You need more determination & grit to learn to snowboard.
✘ Upper body and tailbone injuries are more common.
✘ It’s harder to make sharp turns as a beginner until you learn to carve.

Most people hate their first day of snowboarding, but I find it more fun now that I’m pretty good at it.

username: Cavalcade / from reddit thread: Do you prefer skiing or snowboarding? Why?

Is Skiing or Snowboarding More Expensive?

Despite what others may say, gear is relatively similar in price with ski gear being 5-10% more expensive on average. (source: Whitelines).

Historically there was a larger difference in price. With so many new affordable skis coming out, the price should not be a major consideration in your choice. Saving $100-200 across the lifetime of your gear shouldn’t dictate the sport you choose.

The cost of renting gear in some places is slightly more for skiing as you have to rent boots, bindings, and poles here as for boarding it’s just the board, bindings, and boots.

Is There A Difference Between Ski and Snowboard Clothing?

Snowboarding jackets and trousers have a baggier fit than skiing clothes. The baggier fit is a style influenced by skateboarding and surfing cultures and most boarders prefer that extra space & the feel of a loose fit for jumps and tricks.

The key point is that you can wear both ski and snowboard interchangeably and if you’re still a beginner there’s no need to buy two sets of kits for each sport. Boarders tend to prefer mittens over normal gloves, for greater warmth in colder climes.

I wrote a whole article on the topic:  The REAL Difference Between Ski and Snowboard Clothes if you want to know more.

Which Is More Dangerous?

Snowboards and skiers tend to suffer different types of injuries. Skiers are more prone to leg injuries whilst snowboards are more likely to suffer tailbone, wrist, and upper body injuries. The fact is both are high-impact sports and you should really consider wearing a helmet to protect yourself.

Snowboarding requires greater overall fitness and range of motion at a beginner level, so if you order or are less fit, then skiing is a better option for you.

If you’re overweight or have difficulty getting up from the floor, then both sports will be very difficult for you, but skiing will be easier.

Which Is More Fun?

Both sports are fun. Skiing is usually more fun in the beginning because it’s easier to learn. Snowboarding gets very fun over time when you learn to edge control and it all ‘clicks’ into place.

The better you get in both sports, the more fun it becomes. Over time you realize how much more you have to learn.

Like all sports, you have ups and downs, sometimes you feel elated that you’ve cracked the next level of a particular technique; WOW I’ve finally got it, and the next moment, your trip up over yourself.

Should I Pick Snowboarding or Skiing?

Now that you know the major pros and cons between these two awesome mountain sports, it’s time to make your mind up for your next upcoming trip. Don’t worry too much about how long it takes to learn, because if it’s what you really want to do, then the initial struggle will all be worth it in the end.

Don’t force yourself to snowboard or ski if you don’t want to. Neither sport is for everyone. To one person, snowboarding feels awkward no matter how many times they try, to another it can become the most natural thing in the world.

Some people naturally gravitate more towards a particular choice. If you’ve always wanted to ski OR snowboard then my advice is to PICK that.

If you are going for more than a few days, then try both sports for one day and see which one you feel most comfortable with.

Whichever you choose, I’d recommend that you take lessons from a professional instructor. Friends and family can teach you & provide tips, but a few hours/days of professional tuition will do you wonders and get you off to a flying start.

If you enjoyed this article, please share it. If you have a question, leave a comment below.