Most mid-large ski resorts are privately owned corporations while some smaller resorts are owned by community non-profit organizations.

There are around 637 ski areas that operate in Canada and the U.S – of these 71 of the biggest are owned by 5 different companies (source). Vail Resorts & Alterra Mountain Company own 31 ski resorts across North America – while there are a few independent privately-owned resorts like Vermont’s Magic Mountain (source). The corporation may be publicly held, owned by a family or small group of investors, or a single individual.

Vail Resorts currently has an $8 billion market cap ($MTN) and owns 17 ski resorts. It runs the Epic Pass ($899+) which provides access to 65 resorts around the world. Vail resorts currently hold host to 32% of the market share of skiers with 12million annual skier visits (source). They also own 3 of the 5 biggest resorts in North America; Vail, Park City, and Whistler Blackcomb. Vail Resorts is one of the largest employers in the state of Colorado, employing roughly 5,900.

Here are all the ski resorts that Vail resorts own:

Alterra Mountain company currently owns 15 ski resorts and was established in 2018 after a joint venture between KSL and Aspen Skiing Company (source). It runs the IKON Pass ($899+) which provides access to 36 resorts around the world. Alterra’s resorts account for approximately 6 million skier visits annually across 20,000 skiable acres (source).

Here are all the ski resorts that Vail resorts own:

*Please be aware that new resorts are being acquired regularly, so be aware that these figures are only accurate at the time of publication.

Do Ski Resorts Own the Mountains they’re on?

Ski resorts generally don’t own the land they occupy, but there are quite a few different ownership structures that define ski resorts across the world.

Here are some of the most common structure in the U.S

Ski resorts that don’t own their land will pay rent or a yearly permit (often a percentage of gross income, 3-5%) for running their lifts and operate under provisions of a special use permit. Further reading. The U.S Forest can issue a Ski Area Permit which “..permits for the operation of ski areas and associated facilities on National Forest System lands” (source).

See also  Skiing While Pregnant: Everything You Need To Know

Examples of resorts that own their mountain: include Cascade Mountain in Portage, Wisconsin, and Ski Apache in Ruidoso, New Mexico.

Examples of non-profit / community-based ownership: include ski resorts such as Mt. Ashland in Southern Oregon and Tamarack Resort, Idaho.

Other resorts like Winter Park in Colorado are owned by the City and County of Denver and then operated by private entities (further reading).

This is a great behind the scenes look at how Oregon, Mt. Bachelor’s new lift, Cloudchaser was developed and built over the summer.

Who Owns Which Resort?

For a more detailed list of who owns which resort in the U.S go the NSAA webpage.

How Much is The Ski Industry Worth?

With over 100 million skiers participating each year, the ski industry is unsurprisingly worth billions of dollars. The ski and snowboard resort industry hit a peak in 2019 at 3.46 billion dollars in market size, which as measured by revenue. Despite room for growth, the ski industry has experienced a downward trend in interest over the last decade.

How much does it cost to run a Ski Resort?

It’s expensive. First, you have to buy or lease the land and then you have to invest millions to build the ski lifts. And millions to maintain it, pay staff run it and power any snowmaking machines you may have. Further reading.

On top of the cost of building and operating lift and all the logistics around organizing the ski season, the number of days to collect revenue from skiing is typically less than 6 months per year. Many ski resorts do offer summer activities like mountain biking to supplement their income and turn a profit.

While many medium-sized resorts are being taken over by larger conglomerates with more cash behind them, some smaller resorts have been forced to close or turn into community-led non-profits to stay open.

The industry as a whole is relying more and more on snowmaking machines as annual snowfall is decreasing due to climate change. This means the long-term success of a resort relies on heavy investment and keeping up sustainable visitor numbers in a sector that has not seen much growth.

Who Much to Buy a Ski Resort?

Many millions or billions for the largest resorts. Occasionally a smaller resort may be put on the market for less money.

In 2015 a tiny ski resort – Soldier Mountain Ski Area in Fairfield, Idaho was put on the market for $149,000 which came with 2 working lifts, 2 pickup trucks, snowmobiles, a weather station, and some outbuildings.

Steez magazine predicted you would need another $280,000 annually to invest in equipment, maintain and run the resort (source). When you take into account, lift maintenance, paying permit and insurance fees, and staff and other major costs associated with running a resort.

A Brief History of Skiing in the U.S

Although modern skiing has its roots in Scandinavia, where Nordic skiing and ski design was perfected during the 1800’s – evidence of humans skiing dates back to 6000 BC (source).

In the U.S as gold & silver miners spread out into California and the Rockies, miners began to race each other “down the snowy mountains that surrounded their makeshift communities” (National Forests) on homemade wooden skis with leather bindings.

…read this incredible history of skiing in Aspen. 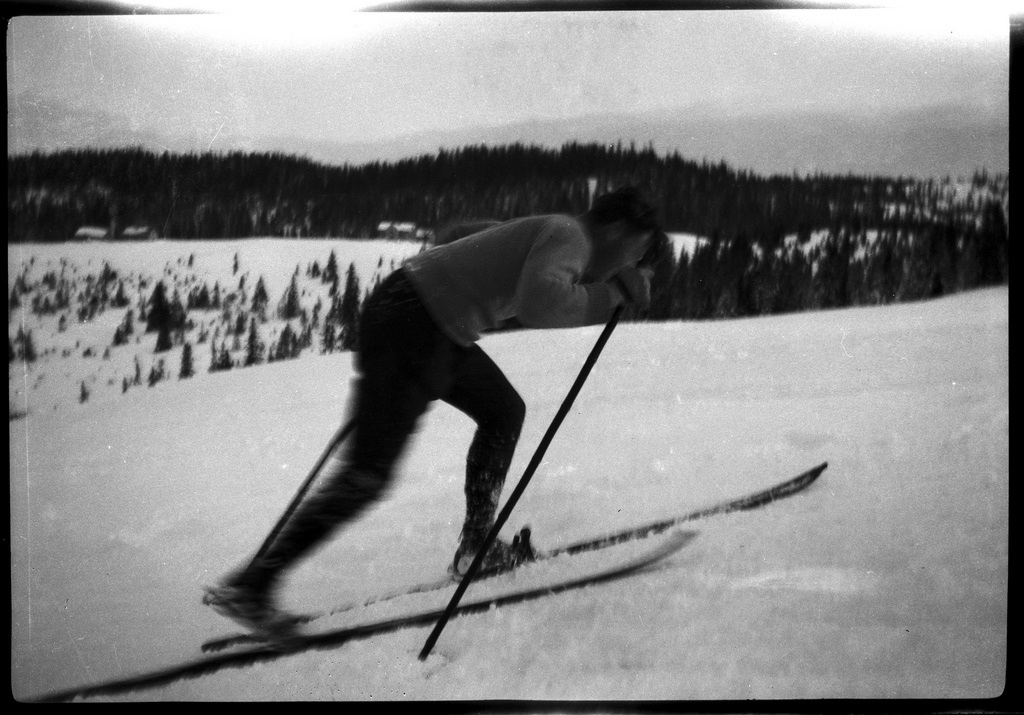