What is One Ski Skiing? Monoski & Technique 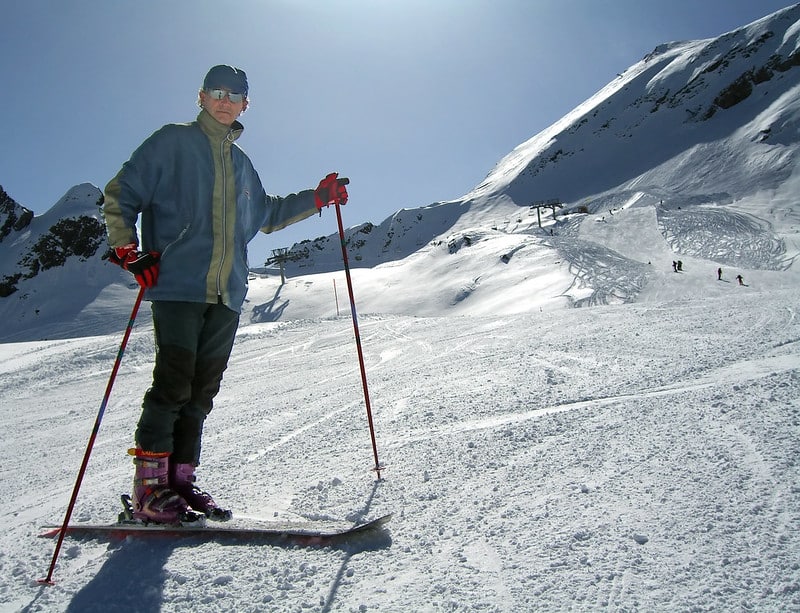 Photo by Mikel Ortega licensed under CC BY-SA 2.0 . We may collect a share of sales or other compensation from the links on this page.

There are two types of one ski skiing: monoskiing, where both feet are attached to one large ski, and learning to ski with one ski to develop your ability.

Monoskiing has always had an eccentric image among other skiers although the reasons are unclear. With a monoski both feet are clamped together parallel on the board so there is limited chance to swivel the body, consequently, the upper part of the body carries out a lot more of the work in skiing.

Skiing training hadn’t changed significantly in over 100 years until a German researcher pioneered a new technique in 1985 using just one ski. The holistic technique combines the interaction between the skier’s body, the skis, and the snow. Through a series of practical exercises on the snow, the skier gains confidence on one ski and eventually transfers the skills across to two skis.

The first monoskis started to appear during the 1950s in the US although no one person is credited with the invention. The first boards were, believe it or not, adaptations from water skis and boot bindings, which were salvaged from bear traps.

During the 70s and 80s, enthusiasm for monoskis started to grow, but they were soon overtaken by the grungy cool of snowboarding. Tales were rife of skateboarders ripping the wheels off their skateboards and turning them into snowboards. A little hard to believe but it goes some way to express the newfound enthusiasm for snowboarding. Snowboarding was a lifestyle as well as a sport, which propelled its popularity beyond the monoski, eventually eclipsing it.

Jonathan Hritz was an early pioneer who discovered the monoskis advantages in the heavy snowfall of Alaska, where he lived at the time. He found his monoski would cruise over the surface of deep powder much more easily and controllably, in comparison to normal skis which could separate and twist causing knee injuries. As Hritz said ‘Once you get a monoski going, it starts to plane on top of the snow. It doesn’t sink in the way that two skis do.’

What’s The Difference Between Monoskiing and Snowboarding?

With the monoski, you wear ski boots, which are clamped together, in parallel into traditional ski bindings, while on the snowboard, softer snowboard boots are clamped to the board at an angle and apart. For the monoski with both legs working in tandem, this gives superior turning ability. In terms of learning, monoskiing is more straightforward, whereas snowboarding has a steep learning curve at the beginning.

How Easy Is It To Learn Monoskiing?

The transition from skiing to monoskiing isn’t too complicated. You still use ski poles and the same techniques to turn, the only difference being that both feet are secured together. Interestingly for completely new skiers, the monoski is so easy to adapt to monoskiers can start to tackle runs on their first day. Skiers who transfer to monoskiing often find the first hour disconcerting because they can’t move their feet independently, otherwise, adaptation is straightforward. Some skiers who have weak knees find using a monoski more straightforward and less likely to cause injury, compared to the twisting motion of conventional skiing.

How Do You Control Your Speed With a Monoski?

Clearly, you’re not going to be doing a snowplow any time soon with a monoski.  However,  the same techniques of sliding turn to lose speed and sliding round into a parallel stop work just as well on a monoski.

For skiers who have had an accident or the disabled who can’t use their legs, the monoski can be adapted with a bucket chair and two outrigger ski poles. This enables skiers’ remarkable freedom on the runs, as well as access using the chairlift system.

Although monoskiing hasn’t taken off in a big way there are still numerous, genuine enthusiasts around the world who swear by it.

2. Skiing with One Ski to improve technique

In 1985 German skiing researcher, G Kassat, studied the interaction between the skier, his skis, and the snow using biomechanical models. He realized it is crucial to understand how skis move on the snow and secondly what actions affect this motion and finally which activities produce these effects.

The culmination of his research was the One-ski-method (OSM), a training programme, where new skiers learn their body skills on just one ski and gradually transfer to using two skis. For novice skiers, the thinking is that it’s difficult to coordinate two independent skis and much simpler to put full concentration into one ski.

The OSM has a number of advantages:

See also  How To Side Slip (or Slide Sideways) on Skis?

The OSM program removes the need for learning the snowplow and stem turns, which saves a lot of time in training. Instead, turns are trained using a long 6-foot wooden pole, which is gripped at one end and trailed in the snow that the other, which automatically initiates a turn.