How Do You Land Ski Jumps? 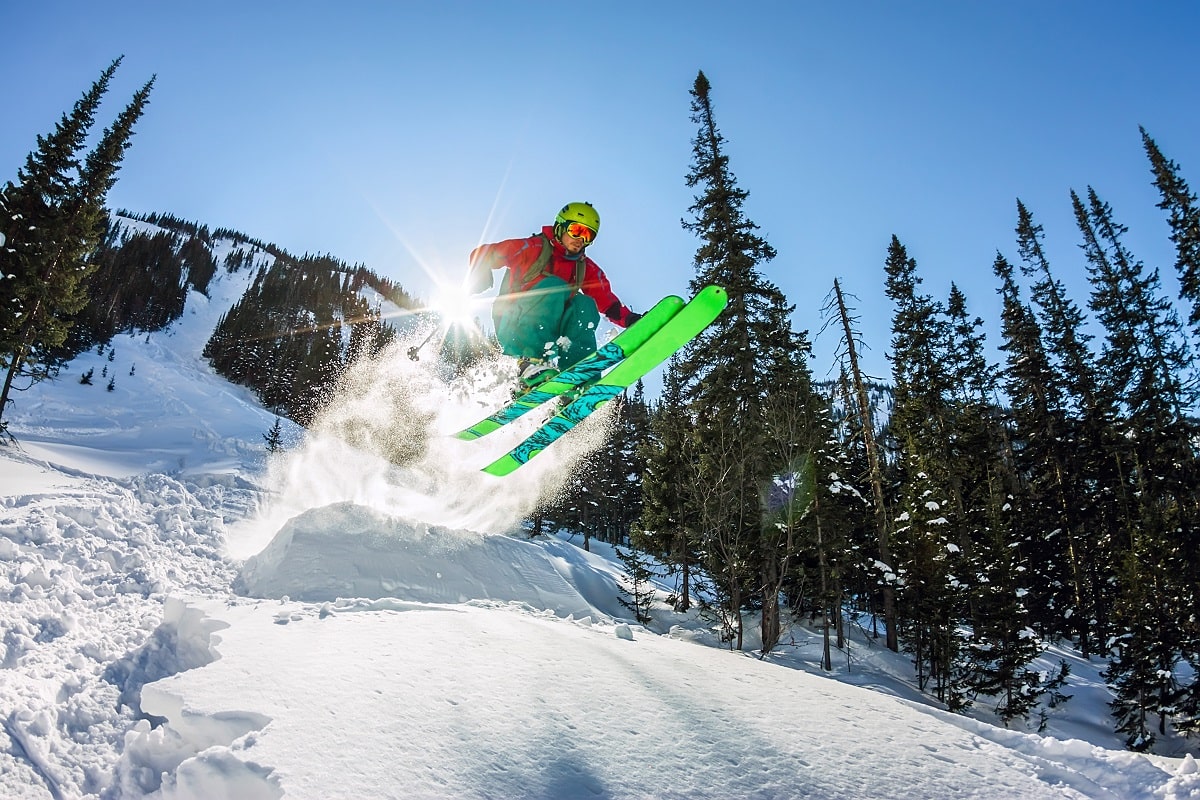 Once you’ve built your confidence on groomed runs, it’s human nature to start going just off the edge of the run, to jump small banks and lips of snow. Some skiers get a real taste and want to develop their jumping skills. So, how do you learn to make ski jumps? And how do you learn to land?

Landing after a ski jump requires the coordination of several skills at the same time. As you land you need to absorb the impact against the snow with your knees, and transition into a slightly crouched position at the same time. You also need to have your center of gravity over the center of your skis to keep a good balance. Once in a crouched position, you are well placed to make any quick adjustments with your arms or legs to keep balanced.

Mastering jumps on skis is often thought of as showy by many skiers. It’s a thin line between pulling off a big jump and ending up as another stain on the snow. However, take your time and progress slowly to larger jumps and you will have another skiing talent in your pocket.

Whether a competitive ski jumper or a freestyle enthusiast the landing of your jump is the critical last stage. It is where you make the rapid transition from a flying projectile to a skier once more.

Quite a few of the landing techniques are based on preventative safety, aiming to prevent a problem before it even arises. For example, when landing it is vital to have your knees slightly bent. This enables them to absorb the shock of impact as the knees bend further, soaking up the excess energy.

If you landed with locked knees there would be no shock absorption and so the energy of impact would travel straight up through the body, giving a very hard landing. Luckily, there are numerous such techniques you can employ to give yourself a good chance of landing cleanly and safely.

How To Learn Simple Ski Jumps

1. Get used to the idea of jumping

Normally when you jump, you use your feet, ankles, and lower legs to give extra spring. However, when your feet are in ski boots they are immobilized and so you must turn to other sources to gain the same spring and lift.

To start to get the feel of ski jumping try a simple exercise wearing your ski boots but no skis. Jump up and down on a flat area of snow. As you jump up, use your toes as levers and spring of them to gain better height.

As you try this you should feel your shins against the front of your boots, which means you are moving your center of gravity forward.

Repeat the exercise, when wearing skis. They will feel heavy and cumbersome at first but get used to how they move and flex when you jump and the additional weight.

Find a small jump with plenty of space around it, which has a flat landing area in front. You need to know the best speed to approach the jump so estimate it with a test run.

Ski towards the jump but as you approach the end of the ramp stop quickly just before. You should get an idea if you were going too fast, too slow, or at the right speed to make the jump. Going too slowly is the worst option, as you progress to bigger jumps.

Once you’re comfortable with the right speed try the jump. As you approach the lip bend your knees and crouch down. From this position, you will be able to spring upwards just as you leave the lip of the jump. By extending your body upwards, as you take off, you will gain extra momentum and more height.

With any jump always extend your arms out in front of you to push your center of gravity forward and give better balance. The timing of the take-off is critical to how high and far you will go and takes some practice to get it right.

See also  Why Are Ski Lift Tickets So Expensive?

After a while, it will feel intuitive but until then judge it by springing off the ramp when the toes of your boots reach the lip of the jump. Maintaining a good spring at take-off not only assists height and jump length but will also help you achieve better balance and less likelihood of any rotation during flight.

Once in the air crouch down slightly from the upright position, with your hips forward, while keeping your hands out front. Your back should be in a 45-degree position and your body weight over the center of the skis. Don’t be tempted to make any forward or backward adjustments to your posture or you will easily throw your balance out.

This crouched position will help you manage air resistance, so you travel farther and maintain good balance. Air resistance is an important factor in jumping, it will slow you down and can also throw you off balance.

When you take off, check for any rotation of the skis to the left or right and correct it as soon as you can. A small rotation when you take off can quickly turn into a large one by the time you land.

How Do You Land Ski Jumps?

As you approach the landing you will still be in the slightly crouched flight position. To absorb the energy of landing you need to extend your body upwards as much as possible while keeping the knees slightly bent.

By extending the body you virtually have the full extension of the knee to absorb any rough landing. Lean forwards slightly to keep the weight over the middle of the skis. Touchdown on the snow with the rear of the skis first. This serves two benefits, firstly the rear of the skis acts as shock absorbers, softening the landing.

See also  How Do You Find The Centre Line Of A Ski to Mount Bindings?

And secondly, as the skis touchdown, they automatically orientate the skis straight ahead, so there is less likelihood of going off course. As you continue with the landing the skis will automatically touchdown their full length on the snow.

Once your skis are fully in contact with the snow using the landing momentum to crouch down, so your knees are bent, and your legs come up to your chest and absorb the impact of landing. This crouched position also prepares you to make any necessary corrective movements with your arms or legs, if balance is an issue.

After landing resume a skiing position and keep your center of gravity over the middle of the skis.

How Do You Land In Competitive Ski Jumping?

Ski jumping at a competitive level has strict rules, where competitions consist of two rounds. Ski jumpers each get two jumps and to qualify for the second they must land their first, without their hands touching the ground.

All jumps are videotaped for exact measuring and assessed by five judges. At take-off, the skier is traveling more than 60 mph (100 kph) before adopting the V-shaped flight posture.

Skiers are partly marked on their ability to land on predetermined marks across the landing area. Competitions are generally two lengths, K-90 and K-120, which correspond to 90 and 120 m lengths from the take-off ramp. So, after take-off ski jumpers must control their descent to aim for an accurate landing.

The rules of ski jumping dictate that the skier should touch his skis down in the traditional Telemark landing style, named after the Norwegian region. This style of landing involves the skier landing with one foot in front of the other, in a similar style to a Telemark ski turn. This style of landing was adopted when ski boots had a lower rear profile. As well as distance, the style of the landing is considered by the judges.