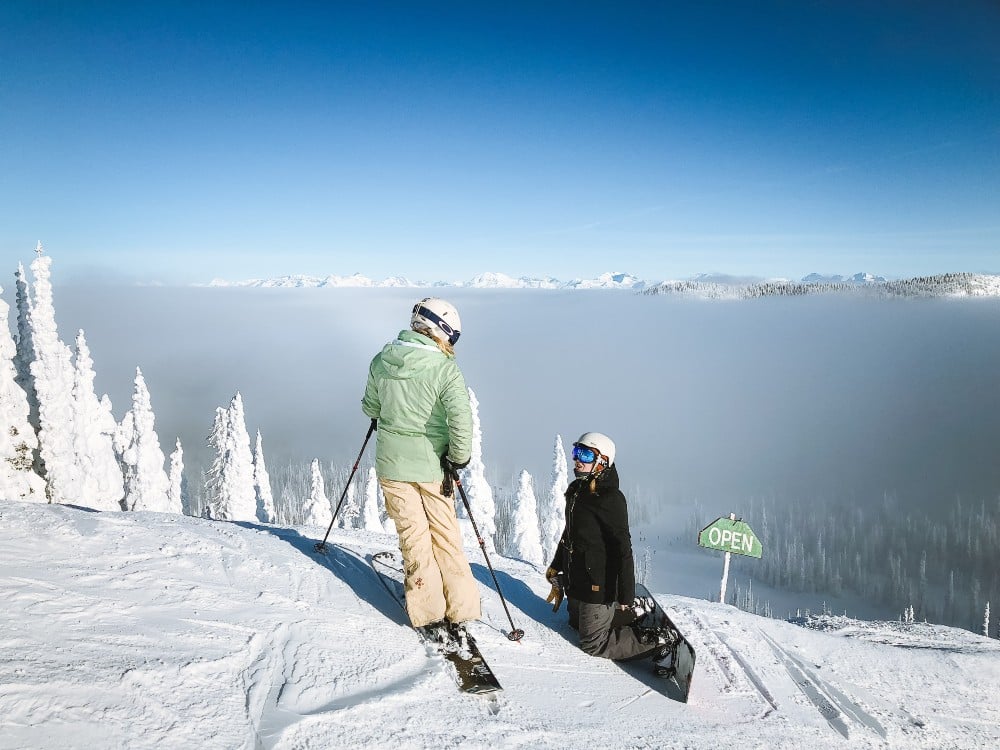 Skiing has always been seen as the more expensive sport and snowboarding is the more affordable option. But is this still the case?

Nowadays, there’s very little price difference. You’ll be buying the same lift ticket, paying the same price for lessons, buying the same jacket and helmet, and expect to spend the same on rental gear. Even buying your own setup will be a very similar price at around $600-$1000 on average.

There are ways of cutting costs, but switching from skiing to snowboarding isn’t one. Buying a second-hand kit and getting your lift tickets early or off-peak could save larger amounts of money. This article explains some of the costs involved in your ski vacation.

How Much Will It Cost To Go Skiing or Snowboarding?

Unless you want to do laps of the free beginner area (available at some resorts), one of the most important purchases is a resort lift ticket. This will give you unlimited access to all pistes in the ski area. Lift ticket prices don’t differ between snowboarding and skiing.

You should expect a day pass to be around the $40-$100 mark. However, there were ten ski resorts in the US in 2021 with a daily lift ticket that exceeded $200 in peak season.

Deer Valley, UT, Beaver Creek, CO, and Park City, UT, were the top 3, with one of them topping out at $249. Don’t be put off by these figures, this is an extortionate exception and shouldn’t be expected.

In 2021 the Swiss resort, Zermatt, offered the most expensive lift ticket in Europe at €85 ($85) for the day. Unlike in the US, on the whole, European resorts don’t adjust their lift tickets by demand. You’ll usually find a fixed rate which can be made even cheaper by booking far in advance.

But, this may be changing. Vail Resorts, the leading North American resort operator which adjusts ticket prices by demand, have announced they’re coming to Europe. They’ll be taking over Andermatt-Sedrun in the Swiss Alps; this purchase from the American company may, unfortunately, change lift prices and ticketing procedures.

Lessons are another place prices won’t differ too much between skiing and snowboarding. On the whole, they’re the same price, but with fewer qualified snowboard instructors, lessons can be harder to get and may cost more in some cases.

Lesson prices vary depending on whether you’re getting a group or private lesson. For a group lesson, you’ll be paying around $25-$45 per hour, whereas a private lesson costs about $70-$100 per hour.

The price increase reflects the personalized feedback and teaching that’s provided in a private lesson, commonly leading to the need for fewer lessons.

Rental prices will vary between resorts and ski or snowboard quality, but not usually between skiing and snowboarding.

See also  How Much Do Skis Weigh? Average Equipment Weight 🏋

Intersport is one of the most popular ski rental stores across Europe, their Arlberg store in Austria offers ski or board rental at the same cost of €20-€40 per day ($20-$40).

Look out for deals as there’s usually an opportunity to get discounted rentals with your lessons or accommodation. Local ski schools and accommodation providers tend to work together to offer the best price for you.

There’s no such thing as a jacket or a helmet that is exclusive to skiing. All jackets, helmets, goggles, thermals, and socks will be appropriate for snowboarders and skiers alike.

You may have seen ‘snowboarding jackets’ listed on online retailers but this usually just features a slightly longer jacket or jumper in a baggier style. This is mainly stylistic and goes along with the more relaxed style snowboarders choose to sport, but has little effect on the riding.

Some skiers may find that longer jackets restrict movement but this will be down to personal preference.

Snowproof – treated with a Durable Water Repellent, this makes the fabric water-resistant.

When it comes to salopettes, there is one difference you’ll want to look out for if you’re a skier. Ski-specific salopettes include reinforced material around the inner ankle area. This helps protect against the edges of your skis slicing through your salopettes, which would result in very cold ankles.

This extra layer is irrelevant for snowboarders but will make a big difference to skiers and shouldn’t affect the cost.

When choosing your jacket and trousers, look out for the waterproof rating (over 15k), a detachable hood on your jacket can come in useful, and an adjustable waist on your trousers so that they can be worn with a variety of different layers. A good quality jacket will be around $150-250 and salopettes at around $100-200.

A beginner snowboarder may want to invest in wrist guards to protect against injury. At around $15-30, they’re relatively cheap and could help prevent broken bones.

Helmets and goggles are another must-have on the mountain for skiers and snowboarders. The price point of both of these items differs hugely with a higher price giving you more advanced technologies. Each item at its cheapest can be around $30 and can range to more than $400.

A fully adjustable design is engineered to help deliver an exact fit.

Great vision, great comfort, equipped with an Anti-Fog lens, freeze will be your best companion all day long.

Is It Cheaper To Buy Skis Or A Snowboard?

Some years ago, snowboarding used to be the cheaper option when buying your own, but with snowboard demand at an all-time low, the pricing is becoming similar to skis.

Kendo is less hooky at the tip and tail but retains all the hard-carving power mid-turn.

If you’re looking to buy a full ski setup, you’ll want skis, bindings, boots, and poles. You’ll be able to achieve this with a budget of around $700-$1300, for the lower end of this budget you’ll probably be getting last season’s items on sale.

It’s a great idea to look out for end-of-season sales (often in the summer) as the skis will still have modern technology and be awesome pieces of kit.

Skis themselves can be relatively cheap, it’s the bindings that can ramp up the costs. They may seem like a small part of the ski, but there’s a lot of design and technology that goes into the foot piece. For the top of the range bindings, the Look Pivot or Marker Jester, you’ll be looking at around $400.

Heat-moldable inner-liner for fit to your foot. Walkable inner-boots for stairs and parking lot traverses.

Ski boots are a crucial part of your setup, if your boots don’t fit you correctly you won’t have full control over your skis. For beginners knowing what to look out for is important, and when it comes to boots, you’ll want to focus on flex.

Always prioritize the fit of the boot over the look of the boot, getting boots custom molded with a personalized insole will make for controlled, comfortable skiing. A good first pair of ski boots will be around $250.

High-performance ski poles prior to novelty of the flask.

Poles aren’t going to break the bank, but it’s an added cost (around $40-80) that snowboarders don’t have to bother with. Make sure you’ve got the right size, around a 90° angle at the elbow when holding the pole in front of you should be a perfect fit. Park-orientated skiers often opt for shorter poles, a safer choice when spinning or in the air.

For a full snowboarding setup, you’ll need a board, bindings, and boots. You may think that being on one plank rather than two will make a snowboard cheaper, but that’s not the case, a full setup will cost around $500 to $1000.

Known for their comfort, snowboard boots used to be a lot more simple which made them a much cheaper option than techy ski boots. But new technology is making snowboard boots just as expensive, and the same goes for snowboard bindings.

The ski and snowboard brand Burton developed Step On® bindings. Instead of having to bend down to adjust and release the buckle found on normal snowboard bindings, Burton has made bindings that you simply step into and the purpose-built boots click straight in. These top-of-the-range boots and bindings are around $300-$500 each.

A great way to exemplify the closeness in prices between skis and snowboards is to look at a brand that does both. Salomon is well-known for all things outdoors, and a popular choice in the ski and snowboard world.

Their current snowboards range from $300 to $650, and their skis from $480 to $750 (all prices without bindings, non-touring, and excluding children’s gear).

With most products bought in the middle of these two ranges, you can see there’s very little price difference between the two disciplines.

Why Are Skis and Snowboards So Expensive?

Both skis and snowboards go through complex design processes and rigorous testing. They’re a piece of tech, with scientific backing, their precisely layered structures and vibration tuning make for a timely process from start to finish.

Skis and snowboards can be made of expensive lightweight materials, and the creators have to ensure that the final product has the desired responsiveness.

There will always be expensive skis and snowboards on the market that harness all of the new technologies, but there are plenty of cheaper options out there too.

If you’re looking to buy an inexpensive ski or board then check out retailers after the winter season ends. End-of-season & summer sales are a great place to find quality kits for less.

One example of a price difference in the ski and snowboard world is between male and female products. Commonly, women’s skis and snowboards will be considerably cheaper than similar products in the male section!

The price gap between skiing and snowboarding is closing, so if you want to save money then you’ll have to look elsewhere. Aiming for non-peak times, booking in advance, and enquiring about any deals that are in the resort for cheaper rentals and lessons is a good place to start.

Skiing and snowboarding aren’t cheap and with well-priced rental options, there’s no need to buy all new skis for your vacation. Make sure you’ve got good quality clothing and protective equipment, and you’ll be good to go!