How To Ski Trees & Glades Without Dying 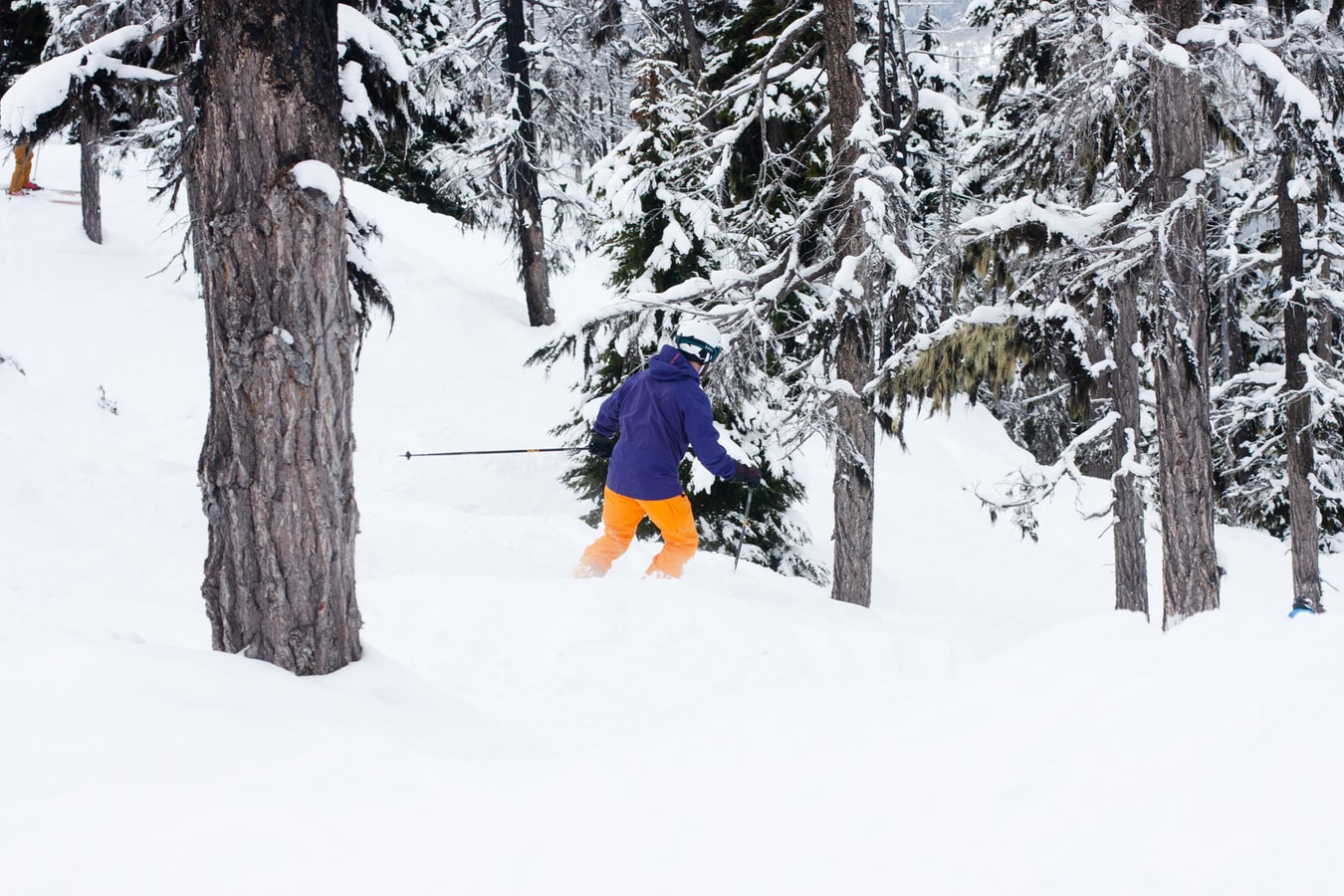 Skiing or snowboarding in trees – One of the most exciting elements of skiing down massive slopes of fresh powder is entering the tree zone and bobbing and weaving between them.

Skiing in trees is exhilarating, but requires a higher level of concentration, a high-level of skiing ability and the know how to stay safe. Look between trees – not at them, ski with a buddy and go slow until you build up confidence.

As per any new adventures or trick in skiing, there are always a few tips on how to up-skill and get to be your best as fast and as efficiently as possible. Learn these lessons on how to ski confidently off-piste between trees and through glades.

#1 Ski with a friend

Sounds obvious, but when you’re in slightly more dangerous terrain like tree skiing, it is even more imperative that you ski with a buddy.

Even if you’re a highly talented and experienced skier, if you’re going to start trying a few tree runs, there are a few things that could go wrong, and there are a few other associated dangers, so best that you have someone watching your back, while you watch theirs.

One of the dangers is that of tree wells – an area of soft, unconsolidated snow that collects around the base of an evergreen tree – and they can get quite deep.

If you should fall in one, it can be quite hard to get out, so best you have someone with you to help you extricate.

This is the best way to learn how to turn when tree-skiing.

When you’re immersed in the trees you’re going to be making those short turns all the way down, and while it does seem basic concepts, there is a skill and technique to endless short turns that needs to be learned.

Remember that there probably won’t be enough open space for you to actually do a singe wide turn on the way down, so you can’t slack off, and you need to continue short-turning until you’re on a clear slope again.

It is a bit easy to get anxious, stressed and panicky before heading into a serious tree-skiing run, but it’s not that bad and you do need to take a few deep breaths.

It is one of those situations when, if you’re a fairly confident and competent rider, you already have the skills and the nerve to do it, but you just don’t know that yet. So you need to relax, slow it all down, and have the confidence in your skills that you know what to do and that there will be enough instinct in your reactions to get you through with relative ease.

#4 Eyes fixed ahead, not on the trees

It also seems obvious, but there have been many examples when riders have panicked and focused on a tree ahead, instead of looking at the white gaps ahead. A panicky focus on a tree while traveling at speed can lead to a disaster.

Instead you need to keep your head up, watch the gaps, and simply monitor the trees as you whiz by them. Intensely focusing on a tree might magnetize you to that tree and no one wants that.

Also, if your eyes are following the gaps, then your instinct and thus your body will follow the same route.

If you want to attempt some tree skiing, the rule of thumb is to find the best terrain to try it, especially for your first few times.

If there is a roped–off area, it usually means that the area is not ready, no matter how much snow has fallen or how enticing it looks.

There are quite a few variables that need to be taken into account when declaring a woody area safe to ski through, and there are people out there making those decisions based on the variables.

Best to trust their judgment than take a chance and come across an impossible section to get through or partially exposed roots, rocks and low hanging branches.

When you actually slow it down, and decide to go through with less speed than you’re used to, the act of tapping off will allow you to assess the terrain better, which is imperative for a first-timer.

Slowing it down will let you feel those shorter turns, and will also allow you to comprehend what needs to be done without putting yourself in any danger.

#6 Keep your arms in front of you

You need to be on your toes, literally, and if you’re poised in a fairly aggressive stance with your hands in front of you it means that you’re going to be really quick with your reflexes, and your muscle memory will be poised to react as is needed.

There will be quite a lot of new movements, as you execute different and more constrained turns to get through the trees, and your hands in front will help you keep that tight balance, as well as lead you to the spaces between the trees.

There does need to be some sort of Zen approach to tree skiing, and it is a time to keep a cool head.

As mentioned earlier, if you’re brave enough to want to have a go at tree skiing, then the chances are very good that you’re skilled and confident enough to do it with ease.

There is just an outside chance of panicking that could happen to anyone. When you’re out of your comfort zone then there could be a rise in stress, even on a subconscious level, and should something trigger that stress, there could easily be a panic situation.

Keep a clear head throughout and you will be fine. Even better, keeping a clear head will allow you to be an example to others you might be skiing with, and it will keep all the tension levels right down.

This is a minor issue, but it is highly recommended. If you do by chance get entangled in lower branches or suffer any sort of big slam, there is a risk that if you’re tied in to your poles you might suffer wrist damage.

Even if you hit a low hanging branch and get your strap tangled, or crash into exposed roots and end up rolling, you want to be able to let the poles go.

You’re on the slopes to have fun, and if you’re not having fun then you might as well not be there.

Tree skiing is an extremely exhilarating aspect of skiing and snowboarding, and the rush of traversing a gnarly section of trees is great, but as with most things in life it’s all about timing.

Finally, when you’re about to exit the tree and head back on the main slope, always look up the slope to make surf no one is bearing down on you. Skiers coming down the slope will not be able to se you because you’ll be obscured by tress, and if you burst out in front of them you could easily slam, or at best be heavily admonished. Getting admonished on the slopes is not cool.

That wraps things up! Enjoy your time in the glades – and remember stay safe out there.