5 Smart Ways To Protect Your Skis From Theft

So you’ve just bought a brand new and expensive pair of skis and you’re wondering: what’s the best way to keep them safe? How come everyone just leaves them lying around the resort? In this guide, I’ll run over the best methods to keep your skis or snowboards safe on the mountain.

The best thing you can do to protect your skis is to mark them with a unique identifier and always leave them somewhere nearby and visible or if you go further put them under lock and key.

Is theft a problem at ski resorts?

The truth is skis and snowboards do get stolen at every resort, but it’s usually a very tiny percentage of the thousands of skiers on the mountain. To give you an idea of ski theft statistics, at Breckenridge ski resort in Colorado, 26 skis and snowboards were reported stolen in 2016 (source). Other resorts will be much higher or lower and I’m sure more than a few thefts were not reported.

The chances of having your skis or snowboards stolen are slim, but you’ll regret not taking any precautions if it happens to you.

You might think the further away from the carpark and higher up the slopes, the less likely it is for your skis or snowboard to be stolen BUT really it can happen anywhere there are people on the mountain. In busy areas where there are lots of cafes or restaurants, it’s actually easier for thieves to grab someone’s skis in the mele of people.

A surprisingly common occurrence is people taking someone else’s skis accidentally thinking they are theirs. Many rental shops carry multiples of the same model, which can make it hard to distinguish between skis of the same size.

This mistake is commonly made by new skiers or skiers leaving the bar after a few drinks. Tired and hazy, they can ski off without even realizing until the next day.

Sometimes, people mix up their skis with someone else’s skis that are the same brand/ color. Today, I spoke with a fellow ski instructor who said that someone else had taken his skis, and left a pair (in the same rack, nearby) that were the same make, but a few cm shorter.

The problem is, once the ski is gone unless they make an effort to find its owner or drop it off at the rental shop or lost property, it can be hard to ever find that ski again.

How to prevent theft?

The first thing you want to do is mark your skis if you own them. Use stickers, a blob or paint or some other mark that makes it clear which skis are yours from a distance.

This helps you in many ways:

If you’re renting your skis, you could put a sticker on them or have a colorful string that your wrap around them, but the ski shop won’t take too kindly to you marking them permanently.

Take a photo of your skis and write down any serial numbers, so if your skis are stolen or accidentally taken by another skier you have all the details to report them and/or make an insurance claim.

It’s much easier to find stolen gear when you have an up-close photo rather than a hazy memory of the color.

It’s fine to leave your board or ski in a rack, but make sure you’re sitting somewhere in view and every few minutes glance over and check on your equipment.

Choose to sit somewhere with the rack in your field of view you, either outside or through a window. The closer you are the easier you’ll be able to get to your stuff if it looks like someone else is picking it up. 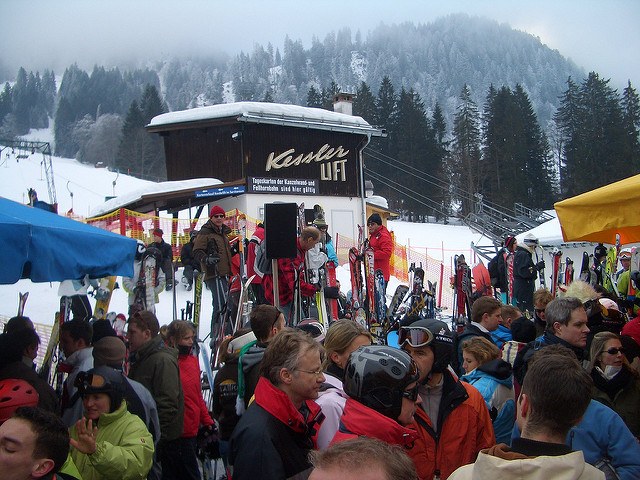 Skis are easily obscured by crowds, especially at après-ski

A popular technique is to mix and match your skis with a buddy. By separating your skis it makes your skis less of a target by an opportunistic thief who will be unlikely to track down your other ski.

This also helps prevent someone from accidentally taking your skis thinking it is theirs, as they will only see two different colored skis on the rack.

You’ll want both sets of skis in view or locked (more on that below) for this method to make sense.

Although a minor deterrent, you can loop your ski poles over your skis and slide them down, so it would take a thief a bit longer to get at the skis and untangle the poles.

You’re not always going to be in view or want to have to keep checking up on your skis. While a lock isn’t 100% cure against theft, it is going to significantly protect your skis more than any other method and deter any would-be thieves from choosing your skis.

At minimum I separate my skis, and carry a small cable lock. 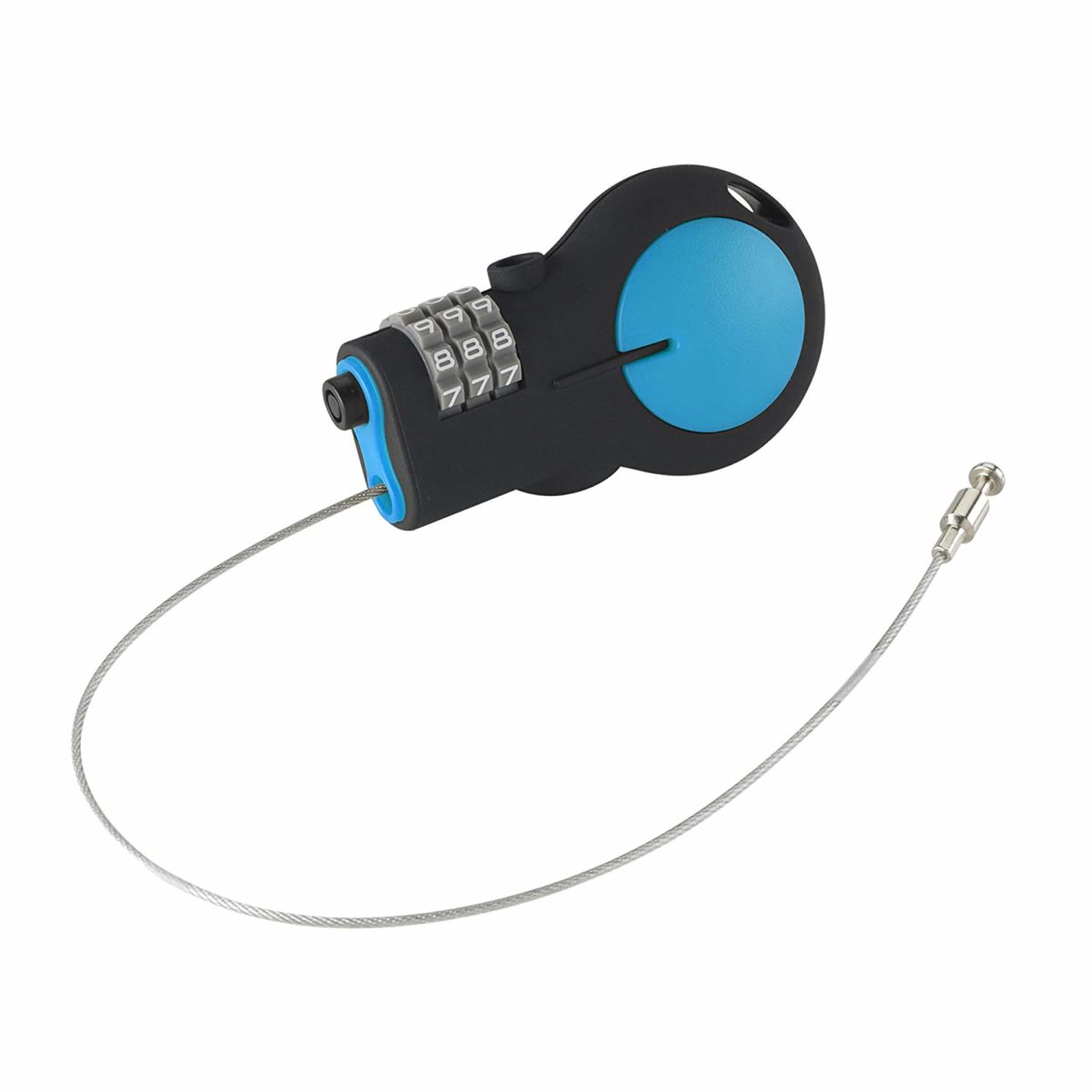 You can buy inexpensive padlocks on Amazon that are like regular locks but have a cord that extends out that you can wrap around your skis and around the rack. 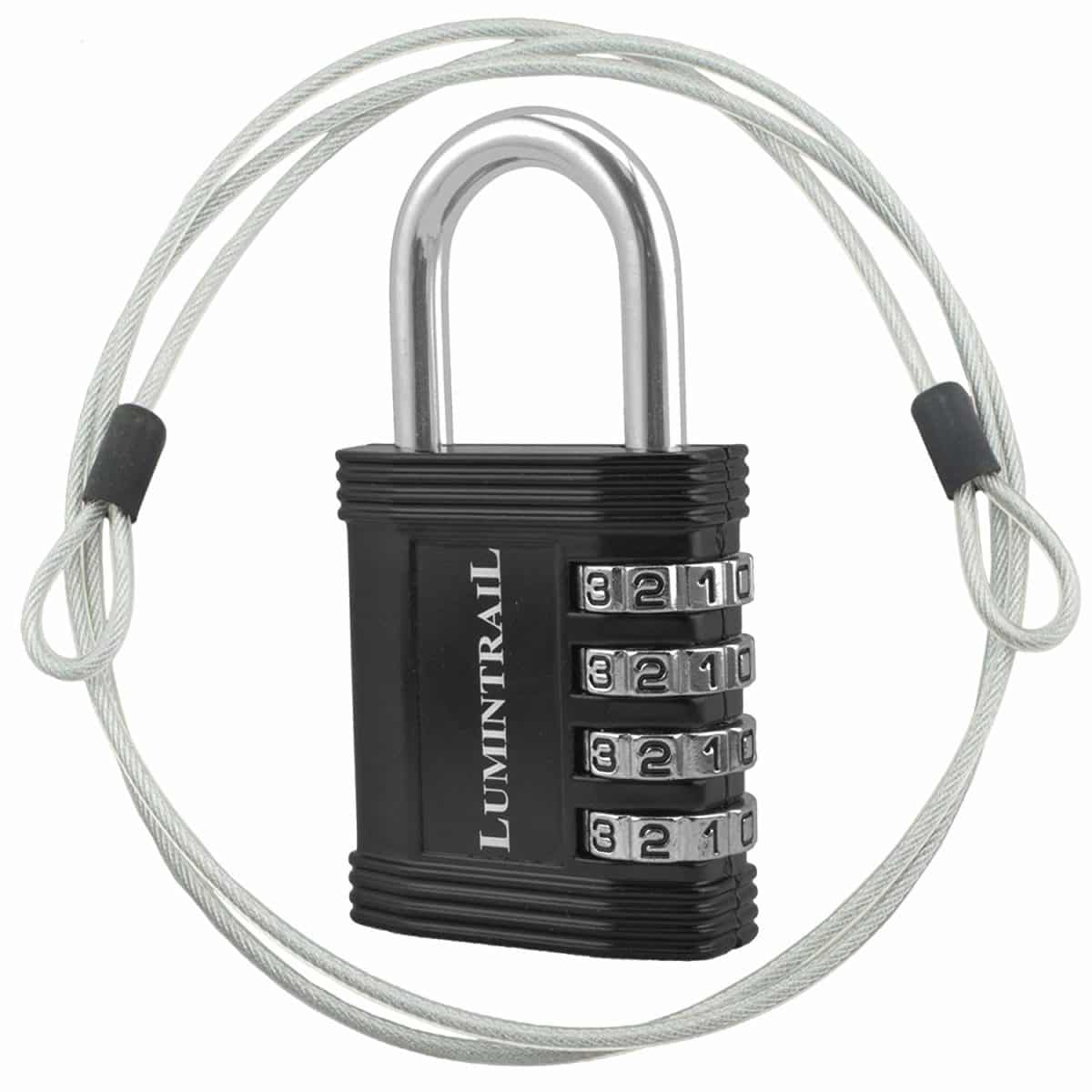 For even more secure lock you can get steel cables and a more sturdy metal padlock and use them together to wrap around your skis.

When not in use the locks are smaller enough to fit in your ski jacket or backpack.

Locks with keys are fine, but there’s no chance of losing your key with a combination lock. Just remember to memorize it or write on a note in your phone. 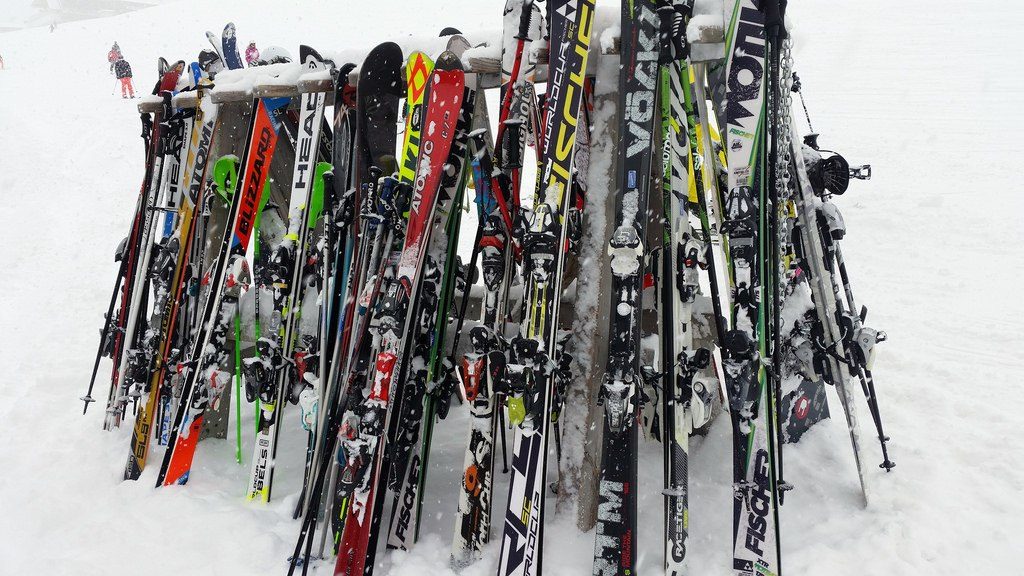 Tip: Many resorts have ski lockers or secure areas you can lave your skis overnight.

..Only joking. But this gets me to another point, the more ‘cool’ looking your skis or the more they cost the more you need to be wary of thieves. Ski thieves are much more likely to steal nice & new looking skis than an old pair you borrowed from your grandad.

Keep in mind that it’s not just skis or snowboards that get stolen. Ski poles, helmet, ski goggles, backpacks, and anything left unattended can be taken by an opportunistic thief.

Source of some tips.

If you’ve got a brand new pair of skis it might be worth looking into insurance options. It might make sense to get the cover along with your travel insurance for your ski trip.

Some ski rental shops include theft insurance as part of the rental fee while others will offer this as an extra add-on. Check when you’re hiring to see whether you’re covered or not.

If you’re recently bought new skis, keep your receipts safe as for most claims you will need proof of purchase.

Why theft can ruin your day

Not only is theft going to put a dent in your wallet and potentially cost you many hundreds of $£€’s but it’s also going to cut into your precious time on the slopes.

It takes time to go to lost property, file a police report, make a claim on insurance and get yourself a new set of skis or a new board.

This is even more of a reason to not let your gear out of view and take the time to get yourself a small lock.

Report a theft or loss as soon as possible. The sooner the search begins, the more likely you’ll get your equipment back. Henry, Telegraph.

Unfortunately, people will take things that are not theirs to take, and while thankfully this isn’t more widespread it could still quite easily happen to you.

Mark your gear, keep an eye on your stuff and carry around a small cord lock for peace of mind.