How to Hockey Stop On Skis (Like a Pro) 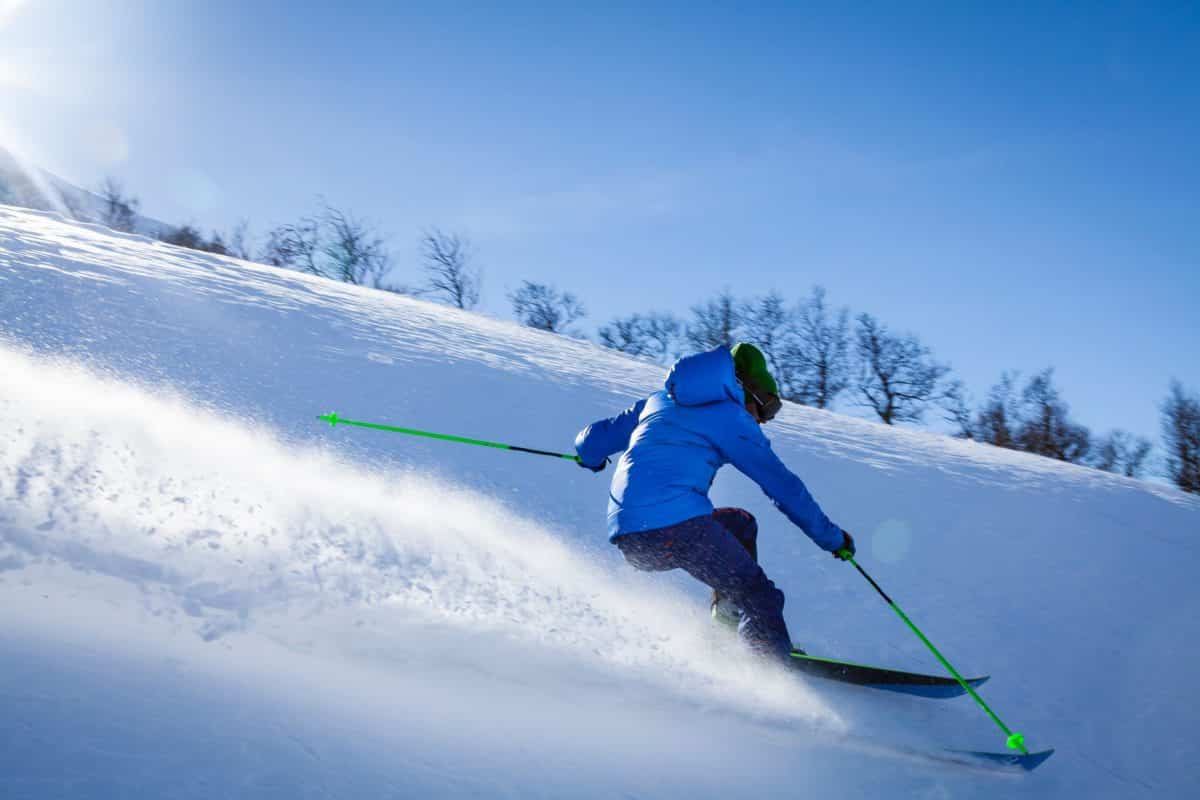 Being able to stop fast on skis is essential for every new skier to learn. The infamous pizza can only you take you so far. It’s time to whip up a cloud of fresh powder and learn to stop like a pro.

What is a Hockey Stop

A hockey stop is also known as a parallel stop and it is a technique for stopping on skis at speed. It is the fastest way to stop and is important for avoiding collisions, and drops and keeping you out of danger.

Definition: Skier glides for several meters, then pivots skis 90 degrees and comes to an abrupt stop on corresponding edges.

How to Hockey Stop

Watch the video below to see how it looks in action.

Video Tutorial on How to Hockey Stop

A lot of times, the mental aspect is what holds people back from learning to hockey stop. If you’ve never skated before you lack the experience to know the feel of a fast stop.

It’s a scary prospect at first to commit to stopping at speed with such a fast and fluid movement. If you’re struggling with the mental block, start slow and build up speed with each try. (Beginner tip: don’t try it too slow as its harder or impossible to do and very slow speeds).

Commit to following through with the stop at the start of your run. Breathe, relax and enjoy it. You’ll do just fine.

Benefits of the hockey stop.

The faster you ski, the more important a hockey stop becomes. More than that, being able to hockey stop is seriously good fun. I remember when I cracked the code to my first hockey stop – it felt incredible.

Much to my delight, I was able to whip up a massive cloud of powder over a snowboarder friend who had stopped on his butt on the slope (as they all do!).

I learned to hockey stop pretty early on in my skiing progression, because I had a major advantage to most people. I play ice hockey and know how to hockey stop on ice skates.

Transitioning from skates to skis

Now the mechanics of a hockey stop on skies is a bit different, but the main premise and angle of your feet and body position are pretty similar. If you can already hockey stop on skates, it doesn’t mean it’s going to be a walk in the park, but it definitely cuts the learning time in half.

The ability to hockey stop will help you on skis.. it’s almost exactly the same motion. Turning will feel somewhat familiar.

Opinion by ‘xzzy’ on the reddit thread:  Transition from Ice Skating to Skiing?

Opinion by ‘xzzy’ on the reddit thread:  Transition from Ice Skating to Skiing?

Although the turning motion is very similar, I’d agree with Madique who advises that muscle memory doesn’t transfer perfectly:

Ice hockey skater and skier here. My take on it is that the two don’t have a lot in common…Skating does take more stamina, but edge control for skating is different enough from skiing that the “muscle memory” that you developed for skating will let you down when skiing (or non kick in at all). The “feel” is totally different.

Opinion by ‘Madique_Anbols’ on the reddit thread:  Transition from Ice Skating to Skiing?

Opinion by ‘Madique_Anbols’ on the reddit thread:  Transition from Ice Skating to Skiing?

It’s clear, skaters have an advantage but there are still some major differences in feel that you’ll notice when you try your first hockey stop.

See also  What is Ski Chatter & Why does it happen?

The most important advantage is that you’ll have the ability to react at speed to the feel of your skis. Skaters generally have more confidence to try it out and keep practicing until they get it.

Many beginner skiers don’t practice enough on their hockey stop and rely on an uphill parallel turns to stop. Once you’ve got the hockey stop down on your dominant side, now comes the tricky part…

..learning to hockey stop on your weak side – that takes a bit more practice and usually results in a few more falls –  reasons to wear a helmet. It’s an amazing feeling, once you can stop confidently on each side.

How to hockey stop on my weak side?

The more you practice the better you’ll get. Hokey stopping on your weak side uses different muscle groups and your foot needs to mirror the angle of the hockey stop on your dominant side. Practice on a shallow gradient. With every attempt, try with a bit more speed and really dig into that ski that bit more.

The hockey stop is a balancing act between digging into the snow too much or not enough. Over time and as you practice, it will get easier and easier until you are able to confidently stop on either side without even thinking about it.

My advice is to make yourself predominantly stop on your weak side for a couple of days (or as long as it takes) to train yourself to get better. If you’re interested in learning more about how ice skating transfers to skiing, read Does Ice Skating Help Skiing? YES & Here’s Why.

See also  How Do You Take Ski Boots Off? (One Simple Trick)

How do hockey stop on hard packed ice?

Stopping on different snow conditions requires you to adjust the amount of pressure you put on your edges and the position of your body. On hard or icy snow, your skis slide more easily due to their being less friction to slow you.

In these conditions, your edge control needs to be more precise and your body position needs to be more balanced if you are to stop without falling over. When possible, avoid making a hockey stop on icy patches of the slope and if you must make a stop on hard-packed ice then be much more cautious until you get a feel for how your skis will slide.

They key to stopping on hard packed ice is to be more precise in your edge control, body posture and have a better reaction to micro adjust both throughout the full maneuver.

How long does it take for to hockey stop?

If you are an okay parallel skier with no skating experience then it will likely take you 2-4 days of practice on your dominant side and 4-8 days on your weaker side.

A parallel skier with Experience.

If you can parallel ski and you practice every time you want to stop, then it will take no more than a few hours to learn on your dominant side. Your weaker side will take a couple of days for muscle memory to develop.

What level of skiing should I have before learning to hockey stop?

That said – don’t leave it too late to learn. Once you can turn on skis and your skis are close to parallel than a wedge then start learning how to stop on your side.

The quicker you ditch the pizza the better. It’s not only safe to be able to stop fast, but it’s also so much FUN.

If you enjoyed this article please give it a share.