How Many Vertical Feet Make for A Big Ski Day? & Who Set The Season Record 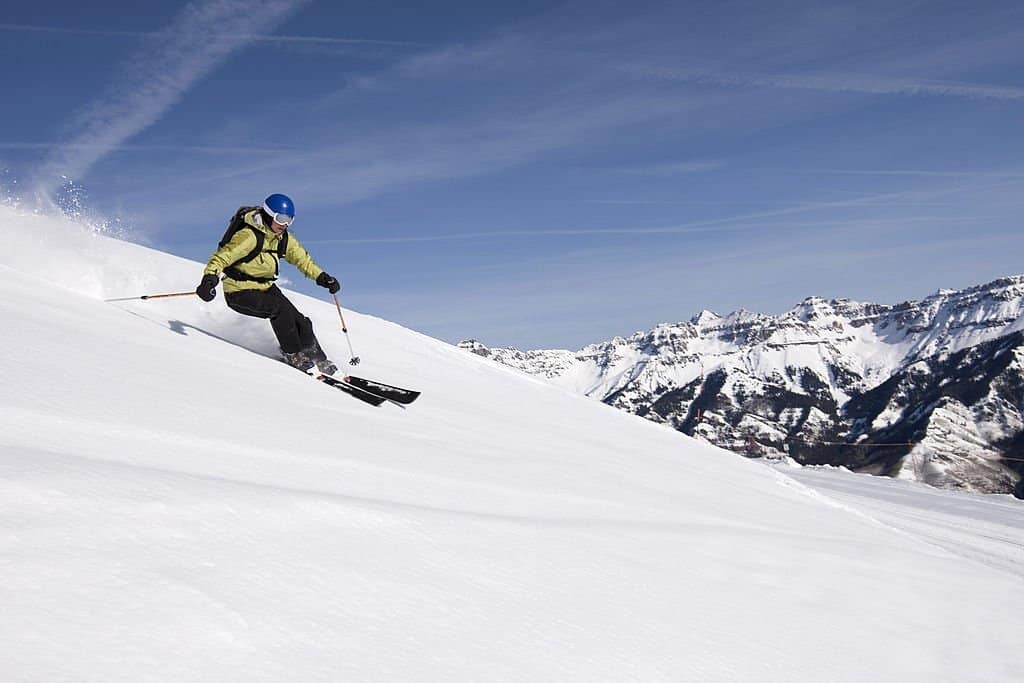 The most common way for skiers to track how much skiing they’ve done in a day is by keeping track of their vertical feet. What exactly defines a “Big Ski Day” is different for every skier, but there is a general consensus.

Those who ski often have much more stamina on the hill, so it’s easier to get those big number days. A beginner may leave the mountain with fewer vertical feet under their belt, but a whole lot more energy expenditure.

Skill level isn’t the only factor in determining how many vertical feet someone can get in a day. The region, terrain, resort size and ski lift speed all impact the number at the end of the day.

It all depends on what type of skiing you’re doing and what you are looking to get out of your day. So let’s check out the best ways to track your vertical, and take a more in-depth look at what factors might affect it.

One of the most common ways for skiers to track their vertical feet is by using their ski passes. Epic and Ikon Passes both will keep track of every lift that you go up so that at the end of the season, you know how many vertical feet you’ve skied over the whole season.

However, this isn’t a perfect system. First of all, it tracks the lift rather than the trail, and there might be variations depending on if you hike up or ski further down.

See also  What To Wear Under Your Ski Helmet To Keep Warm? Balaclava Vs Skull Cap

Also, not every mountain that accepts Epic and Ikon will track to the Epic Mix App or the Ikon App. So, the best option to accurately track the amount you ski in a day might be a third-party app.

We recommend WeSki and Snowboard (on iPhone or Android). It tracks not only your vertical feet but your top speeds and the number of days you’ve spent on the hill.  And the best part? It’s completely free.

There are plenty of other apps with subscriptions that offer even more in-depth features, like Ski Tracks and Strava. Give them a try and see which ones you prefer.

If you’re not a fan of using your phone on the hill, or you don’t have a smartphone, the best option for you is likely an altimeter of some sort.

The most common version of this is to use a sports watch with an altimeter built in. These are usually very heavy-duty and very accurate.

Make sure you look into the features. Some of them will have an option to track your altitude gained in a day, but not all of them.

If you forego a watch that tracks your altitude throughout the day, you might have to do a little bit of math at the end of the day to measure your total, but you’ll have a very accurate read.

How Many Vertical Feet Should You Try and Get Per Day

Very few skiers classify a ‘big day’ by vertical feet alone. Things like the difficulty of the terrain and the quality of the snow tend to be more important.

See also  Why Are Racing Ski Poles Bent? (Not What You Think)

For example, if you are skiing powder in the trees all day, you are less likely to gain a ton of vertical feet. That’s because it is simply more tiring to work your body that hard, and you might spend more time picking lines at the top of each slope.

On another day where you’re ripping groomers, you might get ten times as many vertical feet, but less excitement on the hill. You’ll also be less fatigued after a day of groomers than a day of moguls, no matter how many vertical feet you gain.

Bearing this in mind, most skiers would prefer to have a ski day with varied, great terrain than running the longest lift on the mountain over and over just to gain vertical. But that isn’t always the case.

The Slide Brook Express at Sugarbush in Vermont is the longest lift in the United States, with a length of 3.4 kilometers. Conversely, Beaver Creek’s Buckaroo gondola is one of the shortest detachable chairs, with a ride of only one and a half minutes and an elevation gain of 1,100 feet.

See also  How To Wash Ski Pants? (Without Damage)

Of course, these are the two extremes, and most ski lifts sit somewhere in between these two lengths–but there’s a lot of variation in there. How large the mountain you’re skiing on also has an impact on how easy it will be to get a lot of vertical feet in one day.

Our advice? Don’t worry too much about vertical feet unless you are having a competition between your friends, in which case, let her rip.

There are a ton of other factors making for a great ski day than how many times you ride up the mountain, like who you are riding with, where, and for how long. That being said, it is pretty cool to be able to look at your season’s accumulation of vertical feet.

If you are still really committed to getting the most amount of vertical feet possible, the number to beat is 6,025,751 feet. This is the world record for most vertical feet skied in a season and was set by British Columbian skier Pierre Marc Jette.

If you’re so inclined, download your apps, strap on your watch, and set out to break that record! Otherwise, sit back relax, and focus on enjoying your day on the mountain–no matter how many times you go up the highest lift.