How Hard Is Learning To Snowboard? HONEST Truth 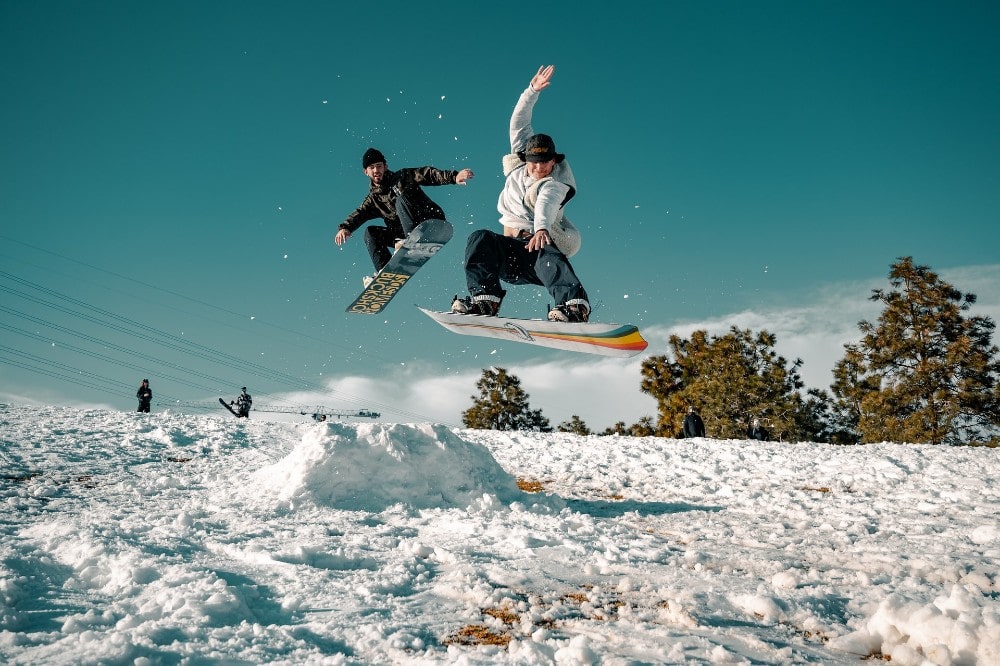 If you’re interested in trying out snowboarding this winter, you likely want to know how difficult it’s going to be and whether or not you’ll be able to carve down the slopes after a few lessons.

Snowboarding may feel difficult to pick up at the beginning, but once you have the basics down, you’ll find yourself progressing through the stages relatively quickly with enough practice. Nothing happens overnight, so allow yourself time and patience to advance your skills.

Is Snowboarding Difficult To Learn For Beginners?

For beginners, snowboarding certainly has its pitfalls when you’re just learning. The average time for brand new snowboarders to consistently stay up on the board is three days. Now, this can vary from person to person, depending on a variety of factors.

Many people take a yearly ski trip, which lasts maybe a week. Three days can feel like a significant chunk of your trip, but it’s worth it if you can add a new skill to your winter sports repertoire, and you’ll be hitting the slopes the following year with the basics under your belt.

Lessons can significantly improve the timeframe in which you can snowboard with more confidence. If you have a trained professional showing you the proper form and pointing out your weaknesses so you can improve upon them, you will be able to pick up the snowboarding more quickly.

As a newcomer to snowboarding, don’t let the crazy trick moves you see at the Olympics intimidate you. Snowboarding doesn’t have to feel overwhelming, and it can be an enjoyable activity that many people enjoy even more than skiing.

When you’re heading out to the mountain, expect to fall down a countless number of times. This is inevitable and even if you’ve skied before, your body won’t be used to standing on a board and not having any poles to support you and provide you with much-needed balance control.

Should You Try To Learn Snowboarding Without Lessons?

It’s not impossible to teach yourself to snowboard without lessons, but you may find it increasingly more difficult. If you continue to make the same mistakes and form bad habits, the velocity you can pick up the sport will plateau or even go downhill at a certain point.

You can often find lessons in a group setting that are more affordable than private ones. This also allows you to befriend others in the same position you are in and may find that you create friendships over the learning experience.

See also  Is Skiing or Snowboarding More Fun? (How To Choose)

It doesn’t matter if you’re an adult looking to take lessons for the first time. This is more common than you think, and it’s nothing to be embarrassed by, as many others are in the same boat. Not everyone had the privilege of going on ski and snowboarding vacations as a child.

Everyone needs to start somewhere and you can find adult-only classes that are catered to the older age group. Young kids pick things up faster and this is natural, it may take you a few extra practice sessions to get down what a 10-year-old can learn in a few hours.

How Long Does It Take To Learn How To Snowboard?

While it may take you a few days to stand up on the board and head out to the easier trails, it will take significantly more practice in order to add skills and confidence. You may find that you need several weeks’ worth of practice and patience to really feel like you’ve picked up the sport.

For those who live near the snowy mountains, being patient with the time it takes to snowboard well doesn’t feel like a big deal. However, if you have to travel long distances and pay for expensive lodging, it may feel like a bummer and you may find yourself becoming disheartened.

Children may advance to an intermediate level after 2-3 seasons, while teens and adults may make the same level of advancement after 1-2 seasons. Anyone with a strong desire and will to learn can improve; it just depends on how much time you dedicate to the new skill.

The factors that most affect how quickly you can pick up snowboarding include age, previous snow sports experience, fitness level, and access to the slopes.

Someone who’s physically fit and has access all season long to the mountains may be able to pick up the snowboarding quicker than someone who is older, relatively out of shape, and only gets to the resort once or twice a year.

Managing your expectations is key when it comes to learning how to snowboard. Don’t beat yourself up too much if it takes longer than you had initially expected.

When Should You Start Learning How to Snowboard?

There is no secret age to learning how to snowboard; regardless of whether you’re 4 or 40 years old, you can learn new skills. Naturally, children are more elastic and flexible, so sports are often picked up quicker at a young age.

When compared to skiing, where kids can start as young as 4 to 6 years old, snowboarders often start later at around 7 years old. This tends to be when they’re both developmentally and physically ready to start engaging with the requirements of the sport.

Learning a new sport as an adult can feel daunting, but it doesn’t have to be! You’re bringing more life experiences to the table, and you often have greater strength and mental determination than a young child.

How to Learn How to Snowboard Quicker

If you want to be as efficient as possible with snowboarding and start from scratch, investing in a few lessons upfront would be beneficial. Having someone trained to teach the sport can help you get the basics down within a session or two.

After this, you can teach yourself most things or ask for tips and advice from fellow boarders on the slopes. Having a solid foundation can do wonders for your confidence, and it can allow you to advance at a quicker rate than self-taught snowboarders.

There’s no magic way to learn how to snowboard quickly, just steps you can take to learn the sport more effectively. Impatience will quickly wreck any progress you’ve made, so keep an eye out for it and recenter yourself if you begin to experience any frustration.

If you’re headed out for your first snowboarding trip this winter, consider practicing on a skateboard beforehand. This will at least give you a baseline for how to balance while in motion, which is key in snowboarding.

Is It Easier To Learn Snowboarding If You’ve Skied Previously?

Now, if you have a history of skiing and want to switch to snowboarding for part of the season, you may find that you have an easier time. However, there are a few key differences that you may struggle to pick up on.

When skiing and snowboarding are compared to each other, most people agree that skiing is easier to pick up at the beginning. It can be harder to advance and master skills as time progresses.

With snowboarding, it can be more challenging to learn the basics as they’re not as instinctual. However, once you get them down, you’ll have an easier time advancing through the levels as most of them build off each other.

If you have some experience with skiing, this is better than nothing at all. You won’t be a complete newbie to the mountain and some of the skills transfer. Don’t expect it to come entirely naturally, though, and have some patience.

There are avid skiers who decide to switch over to snowboarding due to knee injuries. There isn’t as much strain on your knees with snowboarding as you aren’t in the same crouched position that you’re in on your skis.

You’ll have to relearn how to start, stop, and make turns as they’re different between both sports. Your muscles haven’t yet learned these movements and it will inevitably take a few practice sessions to get them down.

Why Is Snowboarding Harder Than Skiing? Or Is It?

Snowboarding requires a greater amount of core strength than skiing, as your core area is mainly responsible for keeping you upright and for directing your turns. In skiing, you can rely on your poles to help keep you stable and provide ryhthm through turns.

In skiing, beginners may feel that it’s more natural to face forward and to have their feet separate from each other. On a snowboard, your feet are attached to the same board and you’re going down the slopes at an angle, which can feel unnatural.

Due to the way your body is positioned, you’ll have a blindspot behind you. As per recommendations, you should always check for other skiers and snowboarders and any potential obstacles.

Snowboarders are more likely to suffer ankle, wrist, and shoulder injuries, especially during the beginner stages of the process. If you fall, you can’t put out one leg to brace yourself as they’re both attached to the same base.

Some people may feel immediately drawn to either snowboarding or skiing and thus may be more naturally inclined to one or the other. One doesn’t necessarily need to be more difficult than the other but as a general rule of thumb, snowboarding tends to be ranked as slightly more difficult at the beginning.

Do Skateboarding Skills Transfer? What About Surfing?

A common query is whether skills and techniques from surfing and skateboarding transfer to the mountain once you strap a snowboard. All three sports require balance, and the skills can be semi-transferable after some practice.

No matter how you look at it, water will feel different than snow. Even when the snow is fluffy and powder fresh, it will feel more solid than water.

If you’ve surfed previously, you may find snowboarding to be a breeze after a session or two. After all, you don’t have to maneuver the waves, and it’s often easier to balance on the neatly groomed slopes of any big ski resort.

On the other hand, if you’re used to skateboarding, then snowboarding may feel very unnatural to start off with. You’re used to rolling on asphalt or cement, which is inherently more solid than snow, even if it’s the packed variety.

Both skateboarding and surfing experience will give you an edge over other beginners and you will probably be able to hit the intermediate slopes within your first season if you practice enough. Don’t let your experience lead to cockiness, though, as you can suffer senseless injuries if you are overconfident in your abilities.

Snowboarding can be a great way to stay active during the winter and for some, it seems “cooler” than skiing does. If you want to learn any new sport, getting the foundational aspects down first is key to becoming a skilled participant.

You may struggle to pick snowboarding up at the beginning, but once you do it enough it becomes second nature. Who knows, you may end up being a complete natural at it and you’ll be snowboarding in the Olympics one day!