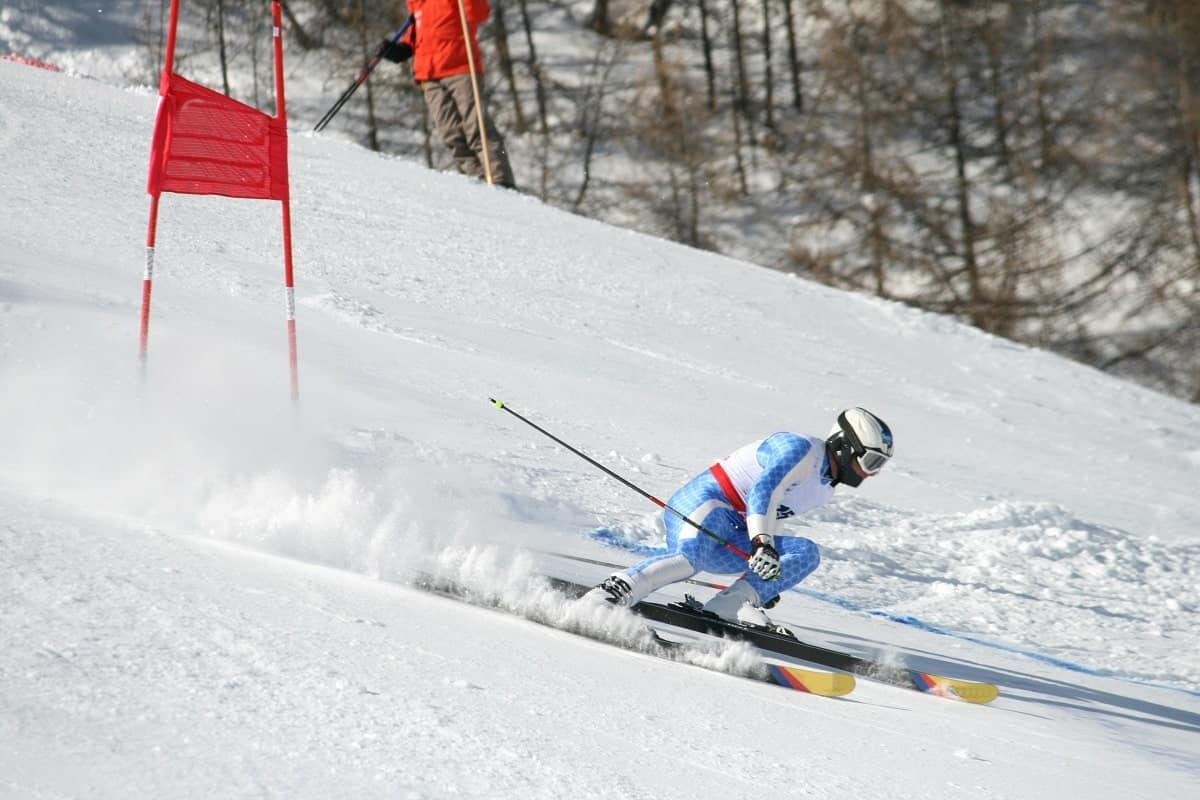 The level of athleticism slalom skiers display is unlike anything else. These superbeings display a remarkable speed while skiing downhill and as one of the most anticipated events in the Olympic Winter Games, Slalom skiing easily stands as the most extreme skiing event.

But how fast do these skiers really go? In short, they can go up to 80 miles per hour with some clocking over 100 miles per hour! It really depends on the course. No other Olympic alpine skiing event comes close. You’re at the edge of your seat while watching skiers fly downhill at neck-breaking speed while whipping around dodge gates.

Slalom athletes aim to clock the fastest time possible while racing down a slope. They need to be in a tucked position and dodge gates, and risers and most importantly, they must tackle the mountain’s unexpected and rigid terrain. These downhill skiers can go up 80 mph depending on the course. with some allowing them to go at 100 mph!

Of course, this speed isn’t consistent throughout the entire course as the speed changes as the skier makes twists and turns.

The state of the slope can affect the skier’s momentum, but nonetheless, going downhill will undoubtedly remain the fastest skiing discipline.

Even though going downhill sounds simple in theory, it’s not. In fact, it’s one of the most dangerous with the vertical drop contributing to the high speeds these athletes regularly reach. Can you imagine going at these breakneck speeds and also needing to turn and shift your body weight quickly to around each gate?

This is one of the most dangerous aspects of the sport as sudden movements can make the skier lose balance, resulting in severe injuries.

Downhill skiers remain in a tucked position to prevent injuries. This position allows them to gain balance and become aerodynamic.

What is Slalom Skiing?

Alpine skiing has five events. Slalom is one of them. The others include downhill, super-G, giant slalom, and combined. Slalom has the shortest yet fastest courses in alpine skiing. There are sudden turns and poles to beat. Skiing is much akin to swimming in this sense. There are various styles to master.

Among the five Alpine events, the slalom is said to be the fastest. Why do you ask? Participants are required to ski down a steep slope, but the vertical descent varies for men and women.

The skiers have one simple task. They need to go past the “gates.” The gates are two plastic poles that alternate between red and blue colors. The gates have a width of 4m or more, but they’re usually no more than 6m, though. If someone knocks over the poles, they must pass through two courses.

Skiers are eliminated after the first course takes place to keep things fair. After that, the skier with the lowest combined time wins the course. Now, what sort of equipment do these athletes use?

The same high-quality material used in Head’s world-leading race skis is used for the ski development – different structured running base for all conditions.

The skis are, of course, a must. Slalom skis are the smallest in size. They tend to be around 165 cm for men while 155 cm for women. Of course, they require bindings to connect the boots to the snowboard, and of course they also wear skin-tight suits to decrease air resistance.

Detachable fleece interior liners and thick earpads let you customize how much warmth you need and provide you extra comfort.

See also  Night Skiing? Read This Guide
Check Price on Amazon
We earn a commission if you click this link & make a purchase.

Slalom skiers also use crash helmets that have ear protection. A chin guard is usually a plus. Participants often get hit on the face by the poles, so a helmet comes in handy to prevent severe injuries. Some competitors prefer wearing shin pads and goggles.

How Fast Do Slalom Skiers Go?

The Slalom range is all about speed and you won’t find such awe-inspiring velocity in other racers; It almost looks like they’re flying down the mountains. What makes this course more exciting is the danger that lurks behind every corner with each turn possibly hiding a dangerous element.

If the participants aren’t careful, they might lose their balance and see themselves out of the competition.

Even though the speed varies, Olympic skiers tend to move at 80 mph., some even move at 95 mph on the steepest side of the course. The skiers who enjoy this course recreationally travel between 20 mph to 40 mph.

Nonetheless, most veterans claim that every racer tends to reach 85 mph or more in specific course stretches.

So, what’s the highest speed an Olympic skier has reached? In 2006, Austria’s Klaus Kroell set the record at 96.6 mph!

Things are different when you’re traveling downhill. The skiing speeds of professional athletes can move up to 150 mph, but you can imagine these are hard to trace. People who ski for fun travel between 10 to 20 mph and the more adventurous kind can reach up to 60 mph.

In the end, the speed depends on multiple factors. The weather plays a huge role, for one. The equipment the skiers use also makes a difference.

For example, a skier who waxes their skis regularly will be able to glide more smoothly. Finally, one’s body composition matters too.

See also  Do Skis Come Off When You Fall? (When Should They)

You might ask, how do you measure the speed of these skiers?

Well, you can do it in several ways. For example, attach a speedometer from the side or use a skiing app. Professionals, of course, use several devices for better accuracy.

Skiing follows an easy principle; The straighter your ski is, the faster it will go downhill. So make sure your tuck is nice and tight. However, this won’t apply when you’re constantly moving. If you’re dodging objects or obstacles, your speed will falter.

So, how can you increase your skiing speed?

First, you have to develop solid core strength. Skiing isn’t for the weak. To increase your speed, you need to build your overall body strength. Moreover, it’s essential to wear proper safety gear. Being fast and furious doesn’t save you from injuries.

Speeding down the mountainside sounds ideal. However, it takes years of practice before mastering it. Without proper technique and training, you’ll only end up getting hurt. Also, pay attention to the rules. If there are certain limits placed, abide by them. Rules are there for a reason. Place your safety first. If you’re looking to improve your skiing speed, make sure to check out this article.

Moreover, skiers should always pay attention to the weather. No one should ski in poor lighting, even professionals. If the sun is about to set, take your equipment back to your lodging and rest. You won’t be able to detect half the obstacles in your path otherwise.

Don’t believe everything you see on TV, after all, it’s all camera work. Let this article remind you how dangerous downhill skiing is. If you’re wondering how fast slalom skiers go, the answer is simple. They move at crazy rapid speeds. Slalom and downhill skiing is perhaps the most dangerous and fastest alpine skiing. Just let the speeds these the skiers travel in do the talking!