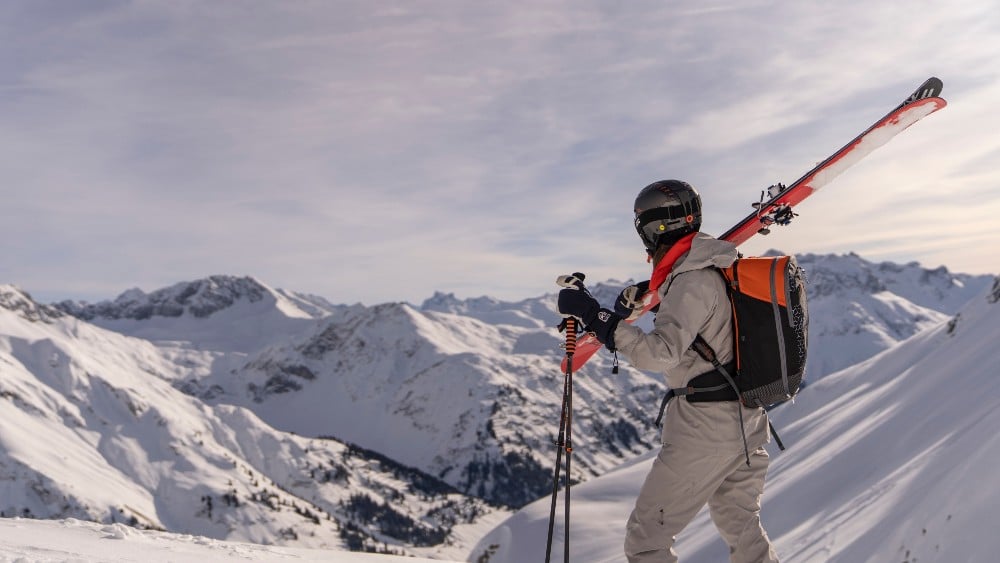 Have you ever wondered how avalanche airbags actually work? Well, here’s my rundown of everything you need to know.

Avalanche airbags are like large, tough balloons integrated into a backpack that can be inflated in the case of an avalanche. They have been proven to reduce the risk of fatality in avalanches by around 50%.

What Exactly Is An Avalanche Airbag?

Avalanche airbags are big, tough balloons that inflate when the cord or handle is pulled in the case of an avalanche. The code or handle is called a trigger since it causes the balloon to inflate quickly when pulled.

The airbag makes you a considerably larger object that will stay on the top of the snow of the avalanche as opposed to getting buried under it.

This is in some cases called the ‘brazil nut effect’ where if you were to take a jar of nuts and shake it, the big brazil nuts would wind up on top. On the other hand, the smaller items, on the other hand, would fall between the small gaps in the nut jar and would sink to the bottom.

The airbag pack is essentially a backpack with an airbag system incorporated into it. You can still carry all your usual touring gear; however, you will have the additional feature of an airbag in your backpack.

See also  Why Skiers Often Get Sunburnt & How to Prevent It

However, this still does not mean you can take them for granted, and you should not then take them as an invitation to go off and explore more dangerous terrain. You can still be seriously injured in an avalanche even if you successfully deploy an airbag.

How Do Avalanche Airbags Work?

Instead, they work due to a process called “inverse segregation,” where the bigger objects rise to the top in a granular flow. This can be likened to shaking a bag of potato chips, whereby the large chips go to the top while the crumbs stick to the bottom.

Since the most common risk factor when caught in an avalanche is suffocation, airbags help by keeping you on top of the sliding debris so that you do not get trapped below, minimizing this risk.

They also provide some head protection during an avalanche since it is like having a giant balloon around your head, so it can help prevent impact on collision.

How Can Avalanche Airbags Inflate So Quickly?

There are two methods for deploying airbags: compressed air canisters and high-output fans. Both methods of deployment can still be repacked again provided it has not been damaged.

How Do The Compressed Air Canisters Work?

BCA Packs and Ortovox (as well as others) packs utilize compressed air. When you pull the trigger, the compressed air is released, causing the airbag to inflate quickly.

The canisters are typically only suitable for one deployment and afterward must be refilled. Depending on the model, this can be done at a filling station or by hand with a high-pressure pump.

One of the disadvantages of compressed air canisters is that flying on commercial airplanes with them can be difficult. Usually, you need to decompress the cylinder and detach the head totally. It is recommended to check with your airline carrier before flying. Fan-powered systems do not have this difficulty.

How Do high-output Fans Work?

JetForce and Arc’teryx Voltaire avalanche packs use rechargeable, high-powered fan systems. JetForce is considered the most popular option and can inflate a 200-liter bag (the airbag) in 3.5 seconds. Rather innovatively, if the bag tears, the fan will enter maintenance mode to ensure the bag stays inflated. However, this is given that the bag is not severely damaged where even the best maintenance mode will not be able to keep it inflated.

The Voltair system inflates to a higher pressure than the other systems according to Voltair although there is no substantial evidence to back this up. Fans utilize a rechargeable battery and are generally good for 2-3 deployments before needing to be recharged.

How Effective Are Avalanche Airbags?

In the early days, some manufacturers were overly optimistic about the effectiveness of avalanche airbags, often citing 97% effectiveness.

However, these studies often included everybody that was trapped in an avalanche that was wearing an airbag pack including many individuals who might never have been buried, small avalanches, or when individuals had the option to get away from the avalanche safely.

However, around 90% of individuals who get caught in an avalanche survive regardless of whether they are wearing airbags or not so it is more relevant when looking at the scenarios where people would not have easily survived and the effectiveness of avalanche airbags in those cases.

Are There Any Studies That Show Their Effectiveness?

They also only looked at incidents where there were opportunities to look into people with and without avalanche airbags so that a fair comparison could be made. Even though many people survive avalanches, this study wanted to look at the effectiveness of airbags.

However, if we include the people who had airbags but were unable to deploy them ( 20% of the individuals in the dataset), avalanche airbags would decrease mortality by 41%.

While avalanche airbags do work, they don’t consistently. So why is that? Well, approximately one out of four avalanche fatalities happen from the injury of hitting trees and rocks on the way down, frequently at freeway speeds.

In which case, any rescue gear is ineffective. Airbags are considerably less effective if an avalanche drains into a narrow terrain trap such as a gully where even a small torrential slide would cover somebody completely.

Avalanches frequently come down in at least two waves as the different parts of the starting zone release. So even if someone is not buried in the first wave and rather is still on the surface a second wave still can bury them even with a deployed airbag.

Airbags also depend on the movement of the avalanche to “float” the person to the surface, but sometimes the avalanche is too small or does not travel far enough for this to work. Also, in around 20% of cases, the individual cannot pull the trigger.

Full-featured pack for dedicated backcountry junkies carrying all the essentials.

Even with the best of equipment, there are times when it does not deploy property or that they are not effective in preventing death. However, it could help save your life, so it is definitely worth considering before you venture into the backcountry.