What is it Like Skiing a Double Black Diamond? (3 Hardest Runs in The World) 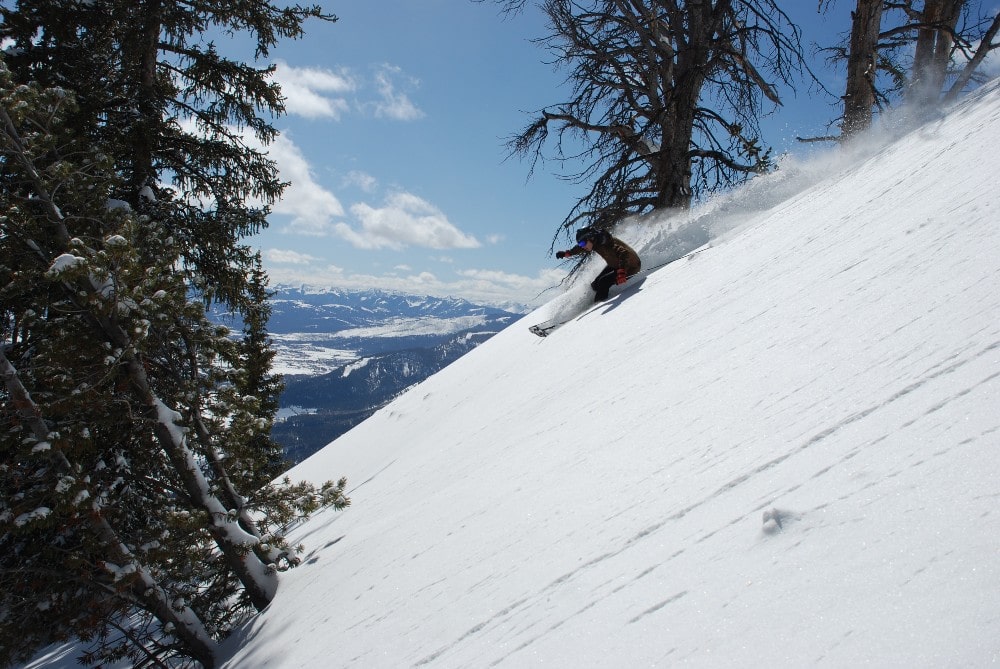 You may have heard of the notorious Double Black Diamond slopes, but what exactly should you expect? Are they the most challenging terrain in resort skiing?

Double Black Diamonds are the most challenging ski runs on the mountain due to their  “exceptionally steep” sections and obstacles such as trees and sheer cliffs. They vary from resort to resort but are generally not to be skied without excellent technique from the most experienced skiers.

Progressing towards skiing a Double Black Diamond involves a lot of time and practice. By using the slope levels as your guide, and working through them at the appropriate pace, maybe one day you’ll be able to conquer the highest level ski slope on the mountain.

Ski slopes are broken down into different levels, and these classifications differ between North America and Europe. Both use a color-coded system, e.g. blue, red, black, but the specifics differ. It’s also important to note that there are no set specifications for each slope type, some blue slopes may be more comparable to that of a red or even a black in a different resort.

These are the most accessible slopes on a North American ski mountain. With a steepness of less than 25%, beginners will want to look out for a sign with a green circle on it and stick to it. They’re often wide and will allow you to practice the basics of skiing down a mountain. The only hazards you’ll face on a Green Circle are the other learner skiers!

A Blue Square denotes a more intermediate ski slope; they’ll be well-groomed and at a steeper gradient than a Green Circle. It’s essential that you can execute linked turns with control when you’re on these slopes, as they are often the busiest areas. Being able to negotiate with other skiers successfully is essential.

Black Diamond runs are made for the more advanced skier. These slopes can have a steepness of over 40%, making good technique a must. In addition to its steepness, these runs may feature variable snow conditions, moguls, and narrow channels.

Skiing Black Diamond runs slowly can also become a hazard to yourself and the skiers around, so make sure you’re prepared and confident before approaching.

See also  Why Are Ski Lifts So High Off the Ground?

The most challenging slope rating you’ll find in North America. These slopes will include the steepest skiing in the resort, narrow sections, trees, and cliffs. Expect big drop-ins, variable conditions, and high winds.

These are exclusively for expert skiers as they require the ability to execute perfect techniques in a variety of conditions while under pressure. Quick decision-making and swift responses are critical. You can’t just be an expert at one particular skill; you must be an expert across the board; this includes short turns, mogul skiing, and jumps.

With risk comes dopamine, so if you’re an expert skier looking for a rush, this is where you’ll find it!

These are commonly known as the ‘learner’ slopes. They contain minimal gradient, are wide, and are usually short, making them a great place to start. Green runs will often be serviced by a drag lift or magic carpet rather than a seated ski lift.

Blue slopes will have a steepness of less than 25% making them perfect for beginners and advanced skiers alike. This will be a good step up from a green slope, and across Europe, blue slopes will vary massively, so get to know the area you’re skiing in as you may come across a challenging blue.

Red runs will be steeper at up to 40% and include thinner, more technically demanding sections. These are not for beginner skiers, so being able to confidently link turns at a consistent pace is necessary as there will be many skiers using these slopes.

In Europe, Black slopes are the highest level you’ll find. Expert runs can be anything above 40% and require a high level of ski ability. Black runs are not to be taken lightly; skiing them with the incorrect technique could lead to serious injury. It should be down to your ski instructor’s discretion whether they feel you are ready to approach a slope of this kind.

Along with Blacks, European un-groomed Black runs are common. These are often the same as the North American Double Black Diamond run, featuring dangerous terrains such as cliffs and trees. The snow will also be variable as it will rarely be groomed.

You won’t find slopes of this name in Europe. But don’t be fooled; this doesn’t mean that the slopes in Europe aren’t as steep and challenging as their North American counterparts. They just lack the fancy name.

Hardest Slopes Around The World

Commonly ranked as a top 10 toughest ski run in the world, the Chavanette is 1300ft of steep, taxing skiing. Scattered with up to six-foot moguls across the slope; taking on this infamous wall will be tiresome for even the most experienced skiers. The entirety of the wall can be viewed by the many people who spectate from the nearby lift and it’s seen as a great achievement by those who manage to get from top to bottom.

Eerily named after the Japanese “ritual suicide by Samurai”, Harakiri is the steepest slope in Austria. Skiers approach it fast for the ultimate adrenaline rush. Unlike many others in this list, it’s a groomed slope, but don’t let this lure you into a false sense of security. You’ll drop 1200ft elevation within this 1-mile run. The steepness of this kind calls for a special secured slope unit to look after it.

If you attempt this slope, you’ll realize why it’s been referred to as “America’s scariest ski slope” as soon as you peer over the edge to drop in. As part of a 10,450-foot mountain, Corbet’s Couloir starts with a 60-degree drop-in that requires skiers to free fall 10 to 30 feet before hitting the slope.

The couloir is host to ‘King’s and Queen’s of Corbet’, a Red Bull televised event that sees pro skiers throw big tricks into the drop-in.

What Level Do I Need To Be?

So what does it take to tackle an infamous Double Black Diamond? These runs shouldn’t be taken lightly, they are for experts and should not be approached if you haven’t been given the all-clear by a ski instructor that is familiar with your ski ability. Double Black Diamonds differ, but there are a few skills that a required across the board:

Soft skills like turning, stopping, and control are necessary to an almost perfect level. Aside from the parallel turn, carving and short turns should be second nature when tackling a Double Black Diamond. You need to be able to plan ahead and slow down where the terrain requires. On a slope of this caliber, leaning too far forward or back will result in a dangerous fall, so having control over your body and skis are essential.

See also  Is it Safe to Ski Alone? Solo Skiing

Many Double Black Diamonds will be ungroomed or off-piste so knowing how to ski off-piste and moguls is a must.

Take a look at the conditions on the day, snow will differ from day to day so you don’t want to be surprised. It may be ice, powder, hardback, or all in one day. You’ll want to be experienced in skiing each of these snow types as you never know what you’ll get on the day.

It’s practically impossible to progress to a good enough level to ski Double Black Diamonds without the help of a ski instructor along the way, and I’d suggest getting a private lesson for the first time you try one out.

Ski lessons will be incredibly beneficial whether you’re a total beginner or a confident intermediate skier. Especially if you’ve got a Double Black Diamond in your sights. A ski instructor will be able to watch you ski and recognize where your technique needs help, pointing you in the right direction towards mastering the skills needed for an expert slope.

Always listen to your instructor, don’t attempt to ski a Double Black Diamond until they believe you’re ready. This really can’t be stressed enough, as premature attempts could likely lead to serious injury. The consequences of mistakes are much higher than elsewhere on the mountain. It’s not the kind of terrain that you can just sideslip out of!

2. Prepare Your Knowledge of Terrain

With any video, you could want at your fingertips nowadays, use this to your advantage! Take a look on YouTube at POV videos of your desired Double Black Diamond to give you an idea of what to expect. These runs are usually taken fast, leaving little time to plan ahead, so getting to know it beforehand can be hugely advantageous.

There’s a natural slope progression in skiing, one which you can comfortably move through with the correct technique and experience.

Double Black Diamonds are imposing and not for the fainthearted, but with the right skills, they can be an incredibly fulfilling and exciting experience. You’ll never forget getting to the bottom of your first Double Black Diamond!