Can You Ski Down Mount Fuji in Japan? (Resort & Off-Piste Skiing) 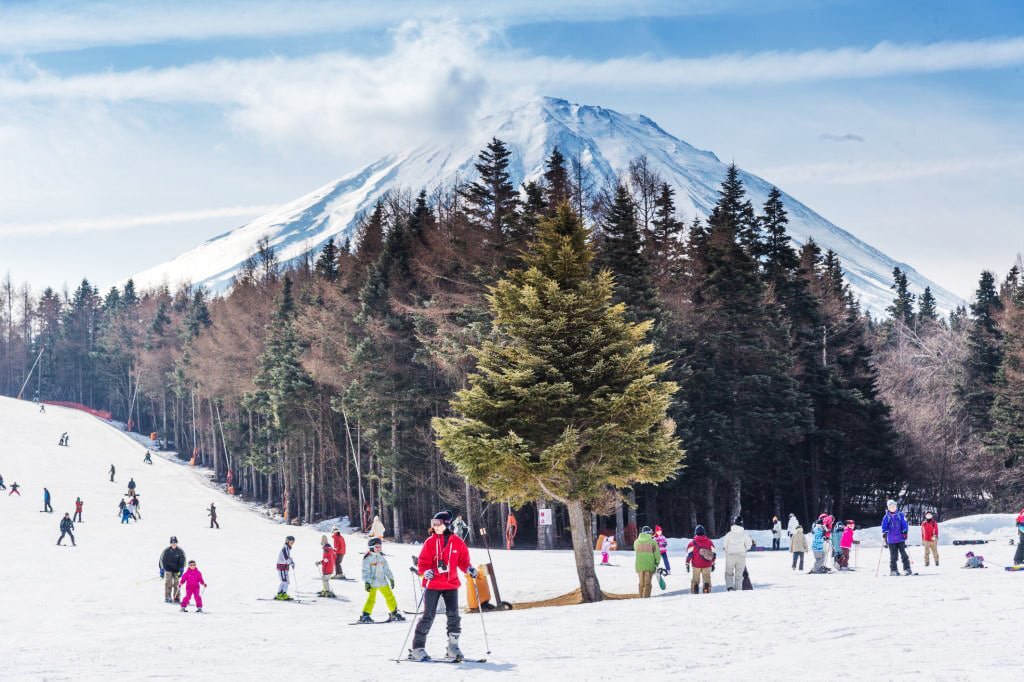 To North American and European skiers, Japan is known as the mythical island that hosted the 1998 Winter Olympics and receives boatloads of snow. There are plenty of peaks scattered across the country worth skiing, but is Mt. Fuji one of them?

Absolutely! Japan’s tallest mountain is home to multiple ski resorts and an immense amount of backcountry territory to ski. From groomed resorts in its footprint to high-terrain guided tours down its steep slopes – skiing Mount Fuji is a unique experience.

Mount Fuji’s exceptionally symmetrical cone, which is covered in snow for about five months of the year, is commonly used as a cultural icon of Japan and it is frequently depicted in art…Mount Fuji is one of Japan’s “Three Holy Mountains”.

On The Significance of Mt. Fuji – Wikipedia

Fujiten is located at the base of Mt. Fuji’s north side.  This small resort is great for beginner and intermediate skiers that has all the amenities one could need, not to mention at an astounding price!

85% of Fujiten’s terrain is designated as beginner or intermediate, but it also features steeper mogul runs and a terrain park for more advanced skiers. Four lifts serve seven separate runs, the longest one coming in at just under a mile long.

This is a great option for those who are new to the sport, but more advanced skiers might get bored with Fujiten pretty quickly due to its small size and lack of steep terrain, which maxes out at 32 degrees.

Fujiten is great for the whole family and won’t leave you feeling like you were overpaid.  Rentals, child care, and lessons are available, and with an adult lift ticket price of $30, it’s hard to argue against checking out this resort.

Night skiing will cost extra, but skiing underneath the stars is something every skier should experience at least once.

Fujiten’s season generally stretches from December until early April.  Though most of the snow is manmade, it isn’t uncommon to receive multiple double-digit storms each season.

Since the majority of the snow is artificial and pretty much all of the terrain is on-piste you can expect the runs to be freshly groomed every day which is exactly what beginner skiers need to excel.

Like Fujiten, Yeti is another beginner-friendly resort, great for the whole family, and won’t break the bank!

90% of Yeti’s runs are classified as beginner or intermediate runs.  This is a relatively flat mountain, with the steepest run maxing out at 25 degrees. This gradual incline is perfect for first-time skiers who may be nervous about trying out the sport.

The only skiing here for those who are more advanced is in the terrain park.  Though its features are relatively small, beginners should avoid doing any freestyle skiing until they have the basics down.

Yeti covers all the bases when it comes to its amenities, including restaurants, rental shops, and child care.  They even offer night skiing! Like Fujiten, Yeti is surprisingly inexpensive.  An adult lift ticket will only cost you $30 per day, which is almost unheard of in North America.

Yeti’s snow season is slightly longer than Fujitens, typically opening in October and closing in late March. Similar to Fuji’s other resort, just about all of the runs will consist of fresh corduroy, at least until the crowds show up.

Pros & Cons Of The Resorts

Let’s take a look at the advantages and drawbacks of Mt. Fuji’s resorts.

Maybe sharing runs with hordes of other skiers isn’t quite what you had in mind.  Maybe you just want to ski something a little more challenging than what the resorts can offer.

There is a multitude of backcountry guiding services that can act as your sherpa to the higher elevation skiing on Mt. Fuji.  Not only will there be more fresh snow, the 4,200 feet worth of vertical drop will have you maximizing your time skiing instead of waiting in lines.

Even with a guide, backcountry skiing is not recommended for first timers.  This terrain is reserved for intermediate and advanced skiers. Hiking up the mountain is much more physically taxing than riding a chairlift, so make sure you feel very comfortable on the snow before attempting this venture.

Pros & Cons Of The Backcountry

Let’s consider the biggest advantages and limiting factors of skiing the backcountry versus the resorts.

See also  How To Properly Break In New Ski Boots?

When Is The Best Time To Ski Mt. Fuji?

Japan’s snowiest months fall in between January and March, with the peak being in February. Even during these months the resorts don’t get nearly as much of the fresh stuff as does the top of the mountain.

The low elevation of Fujiten and Yeti don’t allow for the colder temperatures needed to receive the large dumps that Japan is famous for. In order to fully enjoy some of the best snow the island has to offer, you should plan a trip in February to link up with a guide service and enjoy Mt. Fuji from top to bottom.

Mt. Fuji, Japan is a great destination for skiers of all abilities, and its close proximity to Tokyo makes it just a short ride away from the airport. If you are a beginner, then consider checking out Fujiten or Fujiyama Snow Resort Yeti for an exciting yet affordable skiing experience.

If you are ready to take on more of a challenge, then Mt. Fuji’s backcountry terrain is waiting for you.