Can You Ride Down A Ski Lift? (Why It’s Not Always Possible) 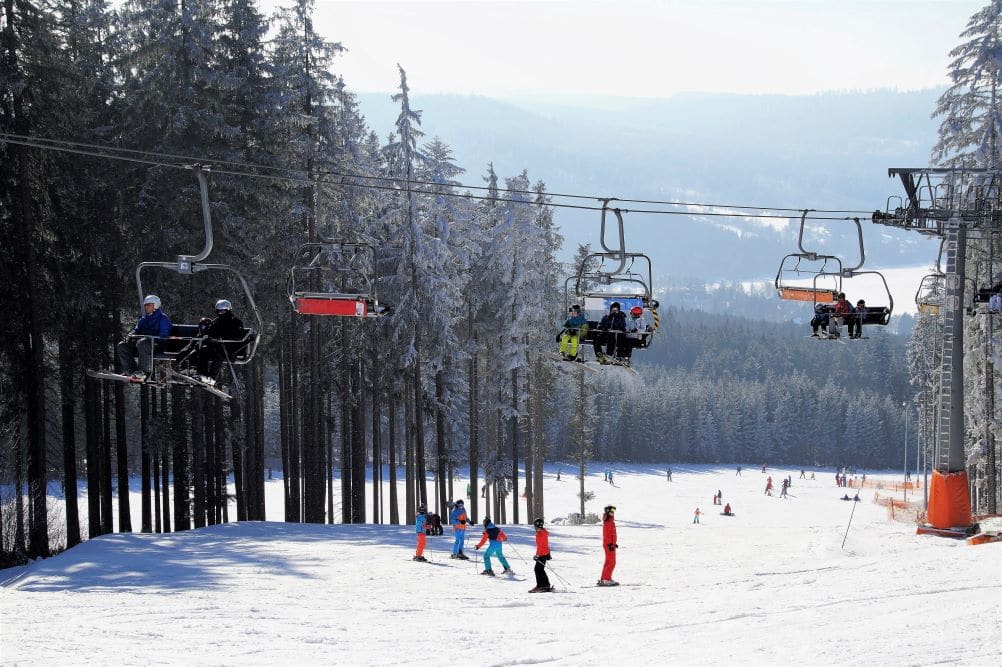 What comes up must come down. As anyone who’s been skiing knows, ski lifts are no exception to this ironclad rule of the universe. When I first started skiing, I wondered what was going on when I sometimes saw people coming toward me in the opposite direction as I rode up a chairlift.

Generally speaking, yes, you can ride chairlifts down. Many lifts are designed to allow skiers to ride down and there are good reasons why people sometimes take the chairlift down instead of making their way to the base on skis.

Generally, lifts that connect to a base area of the mountain will accommodate downloaders while lifts that don’t provide base access will not.

When Can You Ride Down on the Chair?

I’ve just told you that you can ride the chair down, but the truth is this isn’t universally true. On some chairlifts in some resorts, riding down (downloading) is a common occurrence.

Every chairlift obviously has a queue and flat area at the bottom so skiers can board the lift and make their ascent. Many lifts have a similar area (though usually without a queue) at the top so resort guests can easily download.

With lifts that expect downloaders, people can board a descending chair without causing disruptions to the normal flow of the lift.

Gondolas almost always allow guests to ride down because of the way in which people get on and off of them. They usually end in a flat, enclosed area so getting on at the top is just as easy as doing so at the bottom.

Additionally, many resorts allow non-skiers to ride gondolas to poke around mountain summits and take pictures. It would not be safe for such guests to walk down active ski slopes so they are free to ride down on the gondola.

See also  Why is Skiing So Tiring? & How to Recover Quickly

Not All Lifts Are Built With Downloading in Mind

But not every lift is built for people to download. Generally, lifts that connect to a base area of the mountain will accommodate downloaders while lifts that don’t provide base access will not.

This is because, as we’ll get into later, the purpose of downloading is generally to get to the bottom of the mountain without skiing. Skiers riding lifts that don’t begin at the base are, in most cases, expected to be comfortable enough to ski down without issues.

There are exceptions, of course. Chairs which connect directly to an area where there are other lifts with base access are more likely to have the infrastructure to allow for easy downloading.

Exceptions in Case of Emergency

The biggest exception is obviously for emergencies. Any lift which does not normally accommodate downloaders is still able to do so if necessary.

Ski patrollers sometimes have to affix toboggans with injured guests onto the downward track of a ski lift in order to get them down safely. This involves fully stopping the lift for a few minutes.

But some emergencies don’t involve actual injuries. If your equipment breaks in such a way that you cannot get safely down, lift operators will generally be able to stop a lift and allow you to board at the top and ride down on the lift.

It can also transpire that someone might ride up a lift and come to believe that the terrain below is too difficult for them. Such people sometimes ask the lift operators if they can download and the lift operator may well grant them their wish.

But such behavior is generally frowned upon and skiers shouldn’t rely on riding down chairlifts that are not meant for downloading except in genuine emergencies.

The Benefits of Downloading

So why ride the chair down if you’re perfectly capable of making it to the base on your own two skis? One answer to that question is that not everyone is able to ski down.

See also  What Shoes Do You Wear To Ski? (Best Footwear for Ski Trips)

Many resorts have beginner areas at the top of the mountain. These areas are usually accessible by gondola or chairlift with the infrastructure needed to facilitate easy downloading.

In such places, skiing down might require resort guests to tackle intermediate terrain. For a beginner skiing the bunny hill at the top, downloading for lunch or at the end of the day is the only sensible option. Attempting to ride down on terrain you can’t handle is obviously dangerous.

Downloading is Sometimes Encouraged or Even Necessary

But downloading isn’t just for beginners. In fact, many resorts encourage people to download lifts, particularly at the end of the day.

There are a number of reasons for this. One is that some skiers are tired at the end of the day and would prefer to get to the base by riding a lift down rather than skiing.

Especially in early and late season conditions, the base of resorts can feature some hairy and exposed terrain, the kinds of things many skiers (even experts) would prefer to avoid.

The main piste to base, usually is in the worst condition due to the volume of traffic it gets.

In late spring and early winter, riding the chair down is sometimes the only way down. Resorts will open lifts higher up on the mountain even when there isn’t snow coverage at the bottom. In such circumstances where lower mountain terrain is closed, downloading is the only option.

Even under ideal snow conditions, the bottoms of resorts are generally busy with the traffic of skiers racing down. A lot of injuries occur in such places.

Resorts encourage skiers to download to avoid dangerous traffic jams at the bottom and some skiers prefer riding down on a chairlift or gondola so as to avoid the anthill near the base of the mountain.

What Does Downloading Look Like and How Does It Work?

Getting on a descending gondola is about the same as boarding one going up. You take off your skis, enter the lift house, walk to the designated area or queue for downloaders, and walk straight on. Once at the bottom you grab your skis, walk off, and enjoy the rest of your day.

Riding down a chairlift can be a little more complicated. On lifts where downloading is common, skiers can ride or skate up to the area adjacent to the unloading point.

There will be a flat space so skiers can relatively easily slide their way onto the loading zone in order to ride down. Lift operators will make note of skiers attempting to download and slow the lift down for a brief period. Often downloaders will be told to board only every other chair.

As discussed, many chairlifts aren’t intended or set up to facilitate people riding down. The unloading area may be quite steep or otherwise inaccessible, making it impossible for people wishing to ride down to seamlessly board a descending chair.

In these cases, the chairlift has to completely stop while downloads shuffle, skate and slide their way into a loading position. Because of these disruptions, downloading on such chairs is only acceptable in emergencies.

The risk of falling off is greatest when attempting to get on or off a ski lift.

Yes, You Can Ride the Chair Down. Sometimes

For many people, riding down on a chairlift (downloading) is a regular occurrence. It can be very useful for beginners and is sometimes even necessary under certain conditions.

Many chairs and gondolas are built with downloading in mind, but not every lift is, and skiers should only attempt to ride down chairs not intended for descending skiers when absolutely necessary.

When I was a kid, I scoffed when I saw people taking the chair down. But I have long since realized that downloading is a useful way to get down the mountain and having the ability to do so ultimately benefits everyone.