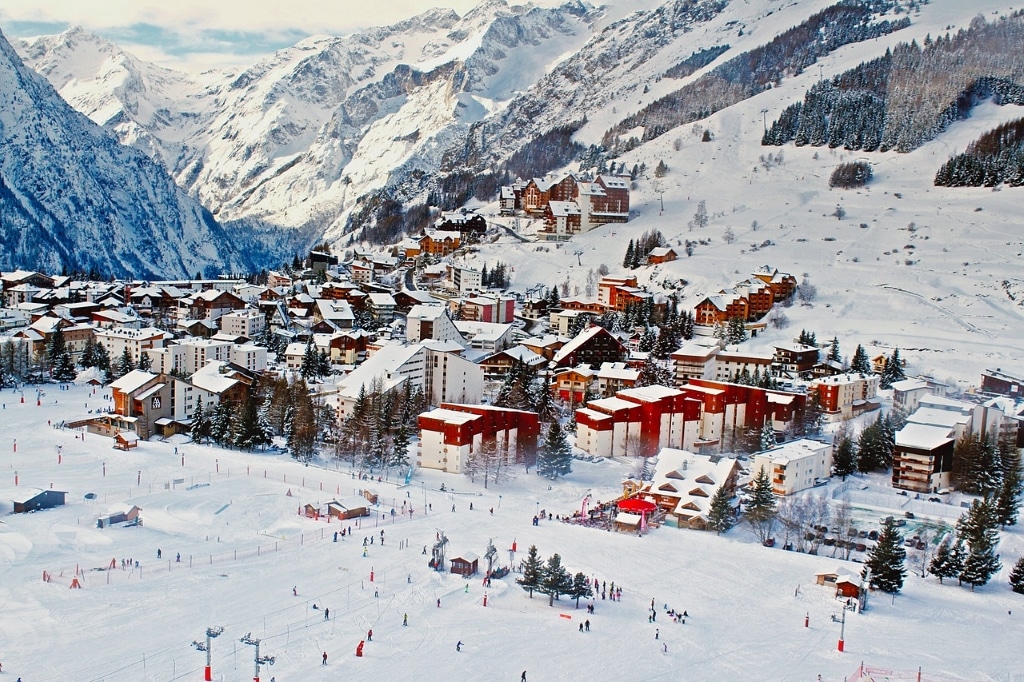 The true answer to this question depends on your preferences but many feel the best time to ski in France is either January or March for highest chance of fresh snow. The best time depends on which resorts you’re planning to visit.

The skiing season usually lasts from late November until April. Each month has its own qualities and depending on your reason for skiing and your budget, you might prefer to go during a particular season.

The exact opening date of each resort is difficult to predict, but many open in the first week of December. This means if you plan everything at the last minute or with free cancelation (in case of no snow) then you can have a great time skiing in early December. Fewer people & cheaper accommodation. Or aim for mid-December and have a higher chance of a successful trip, then leave just before the Christmas rush comes through.

Going skiing during Christmas will give you a white Christmas while also allowing you to enjoy it in style. There are a few benefits and drawbacks of this season.

This is the best month to go skiing if you want a cheaper trip and with less of a crowd. After the New Year, there is a slump this month.

This is considered by many to be the worst winter month to go skiing in France. While it has the best combination of heavy snow and warmer weather compared to January. It is a very high traffic month. A lot of Europeans are on a prolonged school break at this time of year and are on their holidays, and resorts are booked far in advance.

The second best time to go skiing in France, after January, in March. It is the time when the lull comes between February and the peak around Easter.

This is the best weather to go skiing with young children. There are the festivities of the end of the season and Easter. There are many sales on boards, boots, clothing, etc. It is cheaper than February and has longer days and more sun.

While most skiers prefer to ski in the winter, lift-served skiing tends to be open 365 days. Most resorts close down after April.

From May to Autumn, when the first snowfall happens, the Alp’s are considered to be in ‘summer skiing’ mode. This means skiing only on glaciers, depending on the snow and the strength of the previous winter and the heatwave that particular summer.

The 2022 winter had very modest snowfall and as such, the snow depth is so that even Mölltal glacier, one of the few resorts that are open year-round, has decided not to open this year in the summer due to lack of snow.

There are around 250 skiing resorts in France with over 10,000 kilometers of ski slopes and over 3,000 lifts. If you’re wondering when the best time to ski in France is, you’re probably wondering about the best ski resorts too. Let’s check them out.

Les Trois Vallées (The Three Valleys) is a world-renowned ski region in the French Alps, known for its sprawling network of interconnected trails and lift systems.

With over 600 kilometers of skiable terrain, Les Trois Vallées is the largest connected ski area in the world. The region is made up of a series of connected valleys, including the Courchevel Valley, the Méribel Valley, and the Val Thorens Valley.

Each valley offers a unique skiing experience, with a variety of trails suited to all levels of ability. In addition to its size, Les Trois Vallées is also known for its state-of-the-art lift system, which includes high-speed gondolas and chairlifts that whisk skiers to the top of the slopes in no time.

Whether you’re looking for an exhilarating powder run or a leisurely cruise through the woods, Les Trois Vallées has something to offer everyone with its eight different resorts.

See also  Can You Ski Down Mount Fuji in Japan? (Resort & Off-Piste Skiing)

People come here for their different varied and one specifically designed for a kid’s park. Morzine is a classical alpine village. It consists of rustic lodges and chalets, while Avoriaz is more modern with hotels and luxury options. Both offer brilliant amnesties and are one of the best choices when deciding to go skiing in France.

This resort commune is among the most popular skiing areas in France. It sits between France, Switzerland, and Italy at the foot of Mont Blanc, which is the highest summit in Europe. It is known as the ‘Gateway to European Cascades’.

Chamonix is world-renowned for its skiing and mountaineering, and with good reason. The area has some of the most challenging and beautiful terrains in the Alps, drawing visitors from all over the world.

When it comes to skiing, there are three main areas to explore in Chamonix: the Vallée Blanche, the Grands Montets, and the Brevent. The area is covered by five world-class resorts and no matter your level of experience, Chamonix is sure to offer a skiing experience that you’ll never forget.

This is one of the popular areas for winter sports in France. It is a vast ski resort situated in the center of the Maurienne Valley. Les Karellis is great for amateur skiers. The options to stay at this resort includes apartments, hotels, and holiday clubs. As a winter sports resort, it also offers other activities like dog sledding, biking, snowboarding, walking, etc.

Valberg is a hilly village situated in the French Alps. It offers a 90 km ski area. It has fun zones for families and even has a ski park. It is amongst the best ski resorts in France, offering beautiful landscapes and picturesque views.

It offers cross-country skiing, alpine skiing, mountaineering, snowshoeing for the Nordic skiing trails, snowmobile rides, skating, a spa, and even swimming. There are many amazing hotels in the area, including, Hotel Le Castellan, Hotel Le Chalet Suisse, and Hotel Blanche Neige.

Make the Most of Your Skiing Trip to France

If you want to plan your trip to France, then one of the most important things is to plan for all eventualities and book everything in advance if you’re going during a busy period.

Depending on the season you are going, passes and accommodations could be booked months in advance, so you need to do your due research and diligence.

Things to Consider When Choosing Your Destination

Before deciding to book, you need to have an idea of your budget and the type of skiing trip you want. You need to consider the following when deciding on your destination.

What Is the Ski Season in France?

The French Alps receive a high amount of snowfall, which typically begins in November and continues through April. However, the exact dates of the ski season can vary depending on the particular resort.

For example, the higher elevation resorts tend to have a longer ski season than those at lower elevations. In addition, some resorts may open earlier or close later depending on conditions. Overall, though, the French ski season typically runs from late November/early December to early April.

What Is the Best Month to Ski in Europe?

When it comes to skiing in Europe, there is no definitive answer as to the best month. Part of the reason for this is that snowfall can vary significantly from year to year. In general, however, the ski season in Europe runs from November to April.

For many skiers, the best time to hit the slopes is from mid-December to late February. This timeframe offers the best chance for consistent snowfall and ideal skiing conditions. Of course, this can also be the busiest time of year at European ski resorts.

For those looking for a quieter experience, Early December, January, March, and April can be excellent months to ski, as there are often fewer crowds and lower prices. Ultimately, the best time to ski in Europe depends on your personal preferences and what you are looking for in a ski trip.

How Late Can You Ski in France?

Some resorts stay later, into May or even June. The late season is a great time to ski, as the crowds have thinned out and the prices are lower. Additionally, the snow is often more stable at this time of year, making it ideal for beginners and experienced skiers alike.

However, if there isn’t much snow on the slopes then it can make life difficult. Due to this, it’s advisable not to book ahead too far in advance or you may be disappointed.

That being said, if you’re looking to get a last-minute fix of skiing before the season ends, France is often a great destination.

Can You Ski Year Round in France?

The country has a number of high-altitude glaciers that offer excellent conditions for skiing, even in the summer months.

Can You Ski in Europe in May?

While the skiing season in Europe typically comes to an end in April, there are still some places where you can enjoy the slopes in May. In the higher elevations of the Alps, there is often enough snow to ski well into May.

Additionally, many resorts now make artificial snow, which means that even if natural snow is in short supply, there will still be plenty of powder to enjoy. So if you’re hoping to get one last ski trip in before the summer begins, Europe may still be a good option.

Just be sure to check conditions in advance to make sure that there will still be enough snow to make it a fun and enjoyable experience.