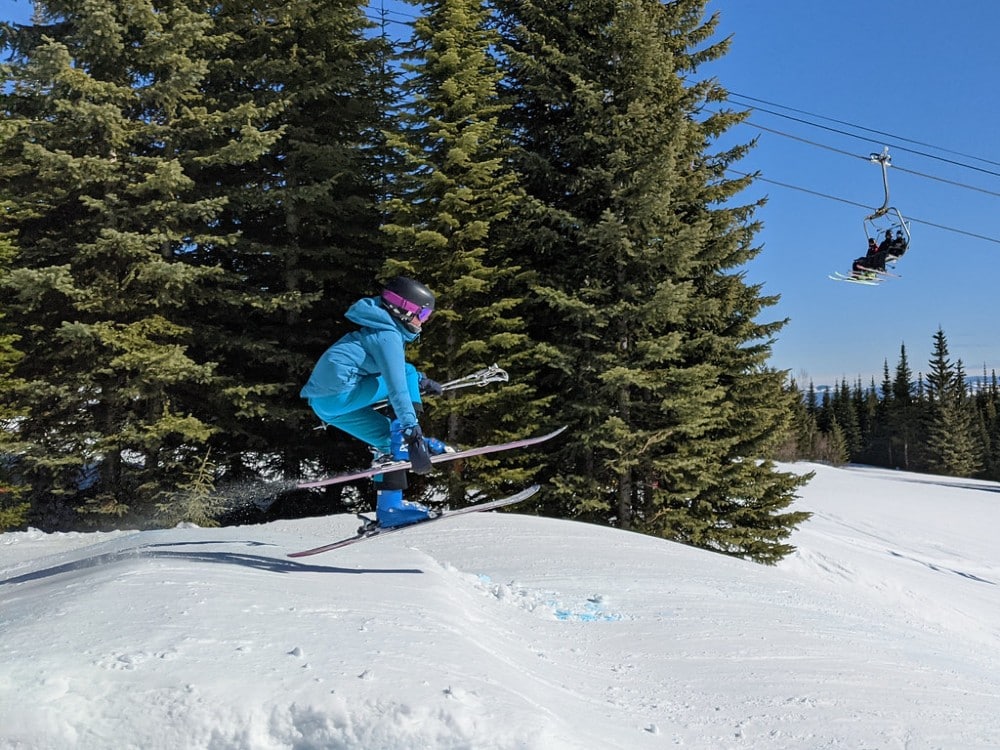 Photo by Ruth Hartnup licensed under CC BY 2.0. We may collect a share of sales or other compensation from the links on this page.

Spring skiing is awesome. The combination of sun and snow makes for amazing skiing conditions – at the right resorts. Thankfully, the United States is spoiled for choice when it comes to great resorts for your Easter ski trip.

Skiing is a great way to spend spring vacation in the United States. Killington is the best option for anyone on the east coast. The west has plenty of options like Mammoth Mountain and Alta. The midwest also boasts excellent resorts, especially places like Arapahoe Basin, Mt. Bachelor, and Breckenridge.

There are plenty of reasons to hit the slopes during the spring months, but choosing which resort is best for you comes down to things like location (what’s easier to get to) and preference (what’s affordable).

Located in the state of Colorado, Breckenridge is a wonderful option for your Spring ski vacation.

The resort features just over 2,900 acres of skiable terrain. The terrain here is very good for all levels of skill, but it skews towards the beginner and intermediate skiers.

Terrain parks are another huge perk of skiing at Breckenridge. Even the parks are rated for everyone, from beginners to experts. Just be warned, the advanced parks are home to some seriously skillful riders.

Breckenridge itself is also often considered to be the best ski town in the state. There is plenty to do for skiers and non-skiers alike. The town has a lot of old western charm.

While Mt. Bachelor might not technically be a full-blown ski resort, it provides an amazing opportunity for spring skiing and deserves some recognition. The reason it’s not a resort is that there isn’t much when it comes to accommodation or lodging.

The skiing and snowboarding, however, are amazing!

The lone-standing mountain features 4,318 acres of skiable terrain, making it one of the largest ski areas in the States. Because Mt. Bachelor itself is a volcano, skiing can be done around the entire mountain.

The beginner terrain is found near the foot of the mountain, mostly starting at the break of the treeline.

Above the treeline is where the more experienced will enjoy themselves most. Blue runs are found all over the hill, making it an intermediate skier or snowboarder’s dream.

As for the more advanced, there are plenty of long black diamonds, as well as a handful of double blacks.

The Sunchaser Spring period is a testament to how good Mt. Bachelor is even nearing the end of the season. There are a number of events that will really spice up your ski trip on and off the slopes.

As Mt. Bachelor doesn’t have a dedicated resort, all of the accommodation and apres-ski is held in the nearby town of Bend. Thankfully, Bend does not disappoint, having some great bars and restaurants.

Alta Ski Area is another great option for springtime skiing. In fact, it’s one of the best resorts out there period. Snowfall in Utah is legendary, and it continues well into the late season.

The only problem with Alta (for some) is that it’s a ski-only resort. Snowboarders wanting a similar feel for Alta can pop over to neighboring Snowbird, which also has great spring skiing and snowboarding.

Alta has about 2,600 acres of skiable terrain that has a wide variety of difficulties. This is even more so if you purchase a joint lift pass that lets you visit Snowbird as well.

Together they form one of the biggest parks in America, at a whopping 5,100 acres.

There are several dedicated beginner areas for new skiers to get the hang of things. Intermediate skiers are slightly less lucky, as there aren’t too many blue runs.

Advanced skiers really get the most choices at Alta. There are so many black diamonds it can be hard to choose! That being said, the lines get blurred between single and double black diamonds, so go in with a bit of caution in the beginning.

Another perk of Alta is that it’s a skiing purist’s dream. There aren’t many frills to the resort in terms of facilities, which can lead to the slopes themselves being relatively uncrowded – made even more noticeable with the no snowboarding rule!

This could be a downside to Alta for some, but it certainly doesn’t stop real ski enthusiasts from loving it.

Over to the east coast, Killington is a great option for spring skiing. This is particularly true given how long they like to keep their slopes open nearing the end of the season.

While the title ‘King of Spring’ might not be entirely accurate, it definitely holds merit for anyone living in the east of the US that doesn’t want to make the trek to some of the other resorts on this list.

This is especially true when considering the 1,509 acres of skiable terrain that makes Killington the largest resort in the East.

There is a decent amount of variation. Beginners are more or less resigned to the lower sections of the slopes, but still have a number of long green runs to try.

Intermediate and advanced skiers have access to some of the best skiing on the east coast. Plenty of blues, black diamonds, and double black diamonds will give riders something to keep themselves busy with for ages.

Just be warned, there are usually a lot of people on the slopes every weekend because of Killington’s proximity to major cities in the east.  Killington also has plenty to do off the slopes for the whole family. In fact, the resort has quite the reputation for having quite the awesome apres-ski scene.

The majority of these spots are found on Killington Road, in between the resort and the town itself. Here you’ll find everything from fine dining to nightclubs, most of which are teeming with visitors that have flocked from all across the east coast.

Mammoth Mountain is found in Eastern California, just outside the iconic Yosemite National Park. The name says it all – this park is absolutely huge.

The resort features over 3,500 acres of skiable terrain, all accessed via great lift infrastructure.  In fact, all the facilities at Mammoth are very good.

The area usually receives more than 400 inches of snow per season, so snowfall isn’t really an issue. And in the event it is, there are over 45 trails with dedicated snowmaking. Perfect for springtime skiing.

Another perk of visiting a Californian resort in the spring is the gorgeous weather – if it’s not snowing.

About a quarter of the trails are green runs. When you consider the sheer size of the skiable terrain at Mammoth, that’s a lot of runs for beginners to enjoy!

The majority of the runs at Mammoth Mountain are rated blue, meaning the intermediates are very well catered for as well. A lot of these runs are long, making them perfect for bluebird cruising in the Californian sun.

There are a number of black diamond runs for the more advanced skiers. For the real experts, there are some double black diamonds, but they are often closed, so be sure to check the trail map ahead of time if that’s what you’re after!

A particularly great part of Mammoth Mountain is the focus on terrain parks. There are so many terrain parks that the resort has become internationally acclaimed.

Accommodation is generally split between ski-in/ski-out slopeside lodging and more traditional hotels in the Village. This is also where most of the bars, restaurants, and shops are.

Nestled in the Rockies, Arapahoe Basin is a great option for anyone in the midwest region wanting to enjoy some late-season skiing. This area is known for having some of the longest seasons in the United States.

This is a no-frills resort that is perfect for any advanced skiers wanting a purist experience on the slopes.

A-Basin, as it’s locally known, has some of the steepest skiing terrains outside of the Alps in Europe. The resort features 1,428 acres of skiable terrain, with a decent amount of coverage by the 9 ski lifts.

The area receives about 350 inches of snow on average each season, meaning there is usually plenty still around in the spring months.

For beginners and novices, options are rather limited, but they do have some small terrain parks that are good learning areas. The base of the mountain also has some groomed runs that will keep beginners happy.

There is quite a large amount of terrain that can only be accessed by hiking, which in part gives Arapahoe Basin somewhat of a hardcore following. This is also in part due to the very challenging terrain that ‘The Legend’ boasts.

Experts and advanced skiers will feel right at home at Arapahoe Basin. There are plenty of hugely challenging runs that will have even the best of the best feeling the pressure.

Accommodation is all found just outside of the base area of the mountain. Most of the best lodging is found at Keystone Resort or in neighboring towns.

Is April Good for Skiing?

While most wouldn’t think it, April actually makes for some great skiing in North America. The combination of warm sunny weather and late snowfall on high-altitude peaks makes for some epic conditions.

And then when you add on vacation periods like spring break, a ski holiday becomes even more enticing.  A lot of the resorts that are known for spring skiing take full advantage of the crowds and host amazing events throughout the late season.

The main things to look out for in a good spring skiing resort are things like high altitude and north-facing slopes. These all but guarantee good snowfall outside of the peak winter period.

There are plenty of choices for American skiers wanting to hit the slopes well into the spring months. A lot of the best resorts found in states like Utah, Colorado, and California offer awesome weather and great snowfall.

Be sure to check the weather before you head to one of these resorts, and you’ll be good to go!