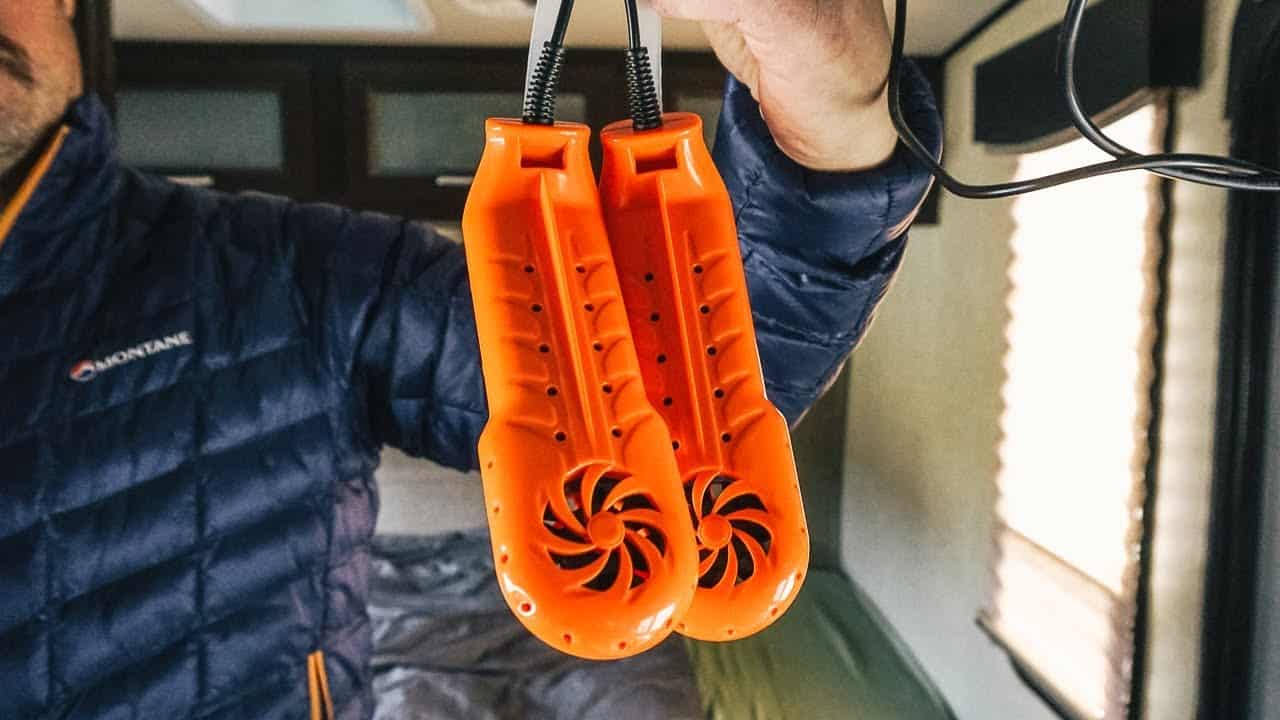 So you’ve invested in a nice new pair of ski boots and you’re wanting to keep them dry and in great condition! Smart move – one of the best ways to dry ski or snowboard boots is to use a boot dryer.

Boot dryers work by heating and blowing air through the boot to evaporate moisture. Depending on the power and the setting boot dryers can take from 30 minutes to a few hours to dry out boots. Very wet or completely soaked through boots that have been caught up in a rainstorm or spring slush may take all night to dry.

$84.82
Buy Now on Amazon
We earn a commission if you click this link & make a purchase.

The PEET Dryer is a 4-shoe electric and fan assisted boot dryer that is great for ski and snowboard boots and year-round for drying out hiking boots or trainers.

It has four cylinders which means it can dry two pairs of boots at once. Amazingly it can dry your footwear (most soaking wet boots) within 1-4 hours. Unlike some other dryers that just use heat, this uses forced air to evaporate moisture much faster. You can use the dials to set the temperature and the auto-off timer so it will stop on its own if you leave the house or forget about it. It doesn’t heat up too much so it won’t degrade your ski boot liner materials.

It comes with a 2-year warranty and an incredible number of high rated reviews on Amazon. It is sturdy enough to take the weight of ski boot or ice skates. You can dry hats and gloves on the dryer just fine with the standard attachment, but an optional glove specific attachment will dry your gloves even faster.

You can also attach an optional deodorizer module – sold here separately  – which will sanitize your boots from bacteria to make them odor-free.

PEET has been making boot dryers since 1968, they know what they’re doing. this boot dryer is a great price for warm bone dry ski boots day after day.

$68.10
Buy Now on Amazon
We earn a commission if you click this link & make a purchase.

DryGuy DX is a boot dryer that uses fans and heat to dry boots and clothing like hats and gloves. It has a quiet fan that you can set to blow with heat or no heat with a 3 hours timer.

It heats up to 40°C (105°F) and can dry two pairs of boots at once. This is hot enough to dry boots within a few hours but not too hot that you worry about leaving it unattended or any risk of damaging your boot liners. It uses a standard AC household outlet and comes with two extension tubes for use with boots up to 40cm (16″) tall.

It’s a more affordable option than the PEET model and has very good reviews on Amazon but it won’t dry your boot as fast and is not made as well.

$50.00
Buy Now on Amazon
We earn a commission if you click this link & make a purchase.

This uses the same DryGuy forced heated air technology as above, but it has two arms that rotate through a 180-degree arc, which means you can dry your ski boots on their side which provides more stability for very heavy boots.

It’s also cheaper, but as a trade-off will only dry one pair of boots at a time. The benefit being you’re only blowing air and using electricity on one pair of boots whereas, with the other DryGuy model, all four ports run at the same time.

It will dry damp boots within an hour and most wet boots will be dry within 3 hours. It has an auto-off shutoff timer up to 3 hours and you can turn the heat on and off with a flick of the switch.

$36.00
Buy Now on Amazon
We earn a commission if you click this link & make a purchase.

The DryGuy Travel dryer is the perfect option for ski trips and traveling away. It’s small enough to easily carry in your carry-on luggage and allows you to have bone dry ski boots each day your on the mountain.

It comes with an AC/DC power adaptor which means it can be plugged in at any hotel room or carport. It fits most footwear and although it will take longer to dry a ski boot than the other options on this list, it is small and compact. The fan is small and doesn’t blow a ton of air, but enough to dry and without making noise if you’re nearby.

Even if your ski boots are dry, blast this on in the morning while your having breakfast and your boots will be warm and preheated for you – keeping your feet warmer and insulated against the cold for longer.

Why Fire Drying Is A Bad Idea

You might be tempted to put your ski boot near the fire or on a heater but this can be catastrophic to your gear. Not only will you be unable to control the temperature but the intensity of the heat will degrade the material and significantly reduce its lifespan. Too much heat on the liner can bend the liner out or shape and damage your expensive new boots. Not only is a boot dryer safer it’s also going to increase the lifespan of your ski boots and make your next day on the slopes more enjoyable.

If you don’t have a boot dryer, the best course of action is to take out the boot liner and keep them in a warm room. Then put a small fan (like this small table fan on Amazon) and point it in the direction of the boots. Airflow will cut down the drying time much faster than still air.

How To Store Ski Boots 🎿

While over time a ski boots performance naturally diminishes but taking care to sore them in the right way you’ll get at least a season or two more out of them.

If you leave your ski boots outside the sun will degrade the plastic shell and reduce it’s flexing performance. Boot flexing is key to transferring your power into your skis and so maintaining it is paramount.

Before you put your boots away over the summer or in between ski trips, make sure your boots are completely bone dry throughout the liner and shell. Any trapped moisture can breed mildew and smells and degrade the materials making it weaker and more prone to damage when you take them out for their next adventure.

Thoroughly dry your boots on a boot dryer or by directing a fan onto the boot and liner but don’t put them near a hot heater or fire.

Dryer sheets are small paper towels with odor-fighting treatments that will make your boots smell fresh, fight off bacteria, and absorb any residual moisture that may settle in the boots. You’d normally put them in with clothes in a dryer, but you can put them directly into your boots.

Before you put your boots away it’s a good idea to do up the buckles so that the shell maintains its structure. You don’t need them done up very tight, but on the buckle notches you would normally wear them at will be just fine.

You can store your boots anywhere inside like a cupboard, away from direct sunlight and temperature swings. Under your bed is a great place as it’s shaded but has good ventilation. It’s also a great place for storing skis when storage space is low.

I cover all this and specifics on storing and looking after skis.