What is Après-Ski? (14 Best Places To Ski Then Drink) 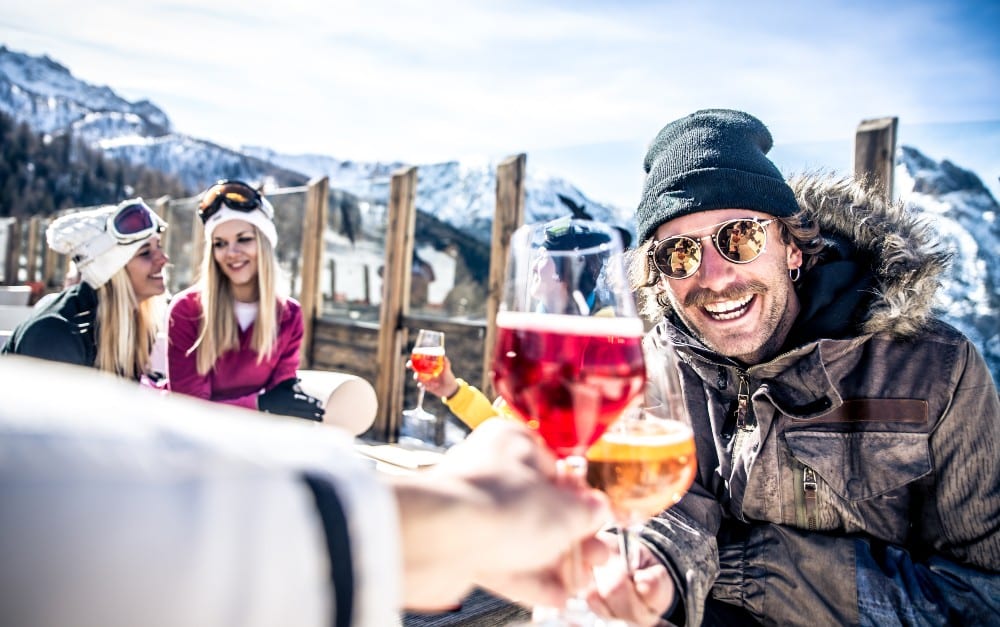 The importance of apres-ski should not be underestimated. It is an absolutely huge part of ski culture and has been for decades. Après-skis have given me some of my most cherished memories from skiing, as well as some lifelong friends.

Different regions offer unique styles of après-ski, but food, alcohol, and comradery are all common features. Europe typically offers more casual après-ski than North America, but Alpine countries like Austria and France are home to some of the biggest piste-side parties in the world.

Après-ski is one of the most important parts of skiing and is a component that has been heavily intertwined with ski trips for many years.

Après-ski is the French term for what you get up to after skiing – hence the name. It is also one of the best parts of skiing for those of us who like to party from time to time. That being said, there’s typically more to après-ski than just partying.

Après-ski can vary hugely depending on the region you’re in. In North America, ski shots and table-top dancing are rather common. Whereas, in some of the more sophisticated regions in Europe, like Italy, you might find cheese and wine tasting to be on the menu.

That isn’t to say one or the other is exclusive to any region, though. You will most certainly find both the more raucous and more elegant of the two in most big skiing countries.

This all begins more or less when the ski lifts stop for the evening, but it isn’t uncommon for the more eager skiers to begin as early as just after lunch.

Whether you want to get an early start on the après-ski or get the most out of the day of skiing, you’ll most likely have an awesome time and make amazing friends. One thing is almost certain, though – there will be alcohol involved.

Après-ski can range in how raucous it can get and that makes it hard to choose where the best après-ski is. While Italy is better known for its more sophisticated affairs, places like Austria and most of North America are no strangers to raging piste-side parties.

See also  How To Side Slip (or Slide Sideways) on Skis?

The United States is renowned for some amazing après-ski. It’s a huge part of the American ski culture. America is also massive, with plenty of ski resorts to visit, meaning there are a lot of great options for great après-ski locations.

Aspen Snowmass is one of the most popular ski resorts in all of North America. It really is world-renowned.

There’s no shortage of bars, restaurants, and shops to be experienced in Aspen when you take some time off the slopes or the lifts close for the evening. You’ll find both cozy nights in and pulsing music to dance to.

Jackson Hole is one of the most popular resorts in all of America. Good times accompanied by live music and good food and wine are a given at Jackson Hole.

For those who aren’t big on rowdy drinking, there are plenty of other activities to behold like dancing all night and a variety of games like bowling.

Spots like the Mangy Moose have been a staple of the region for over 50 years, providing visitors and locals with amazing steakhouse dining.

Park City has more to offer than just food and drinks. There are endless activities to enjoy off the slopes.

Things like a 1 km bobsled ride and ziplining are definitely popular amongst the more thrill-seeking, but there are also museums and galleries that deserve a visit for the more relaxed crowds.  There is also an awesome selection of bars that feature live music.

The après-ski in Canada is generally quite similar to that of America, but there are certainly a number of places that put a French twist on the recipe.

Whistler is one of the most popular ski resorts in all of Canada, and even in the whole of North America. Après-ski here is just as well-known as the quality of the skiing, though.

The Fire and Ice show is a unique feature that is definitely worth checking out when at Whistler. It consists of skiers and snowboarders performing acrobatics through rings of fire. There are also traditional après-ski affairs like table-top dancing and live music.

When it comes to Banff, whether you’re at Lake Louise, Sunshine, or Norquay, you’ll find something epic waiting for you once the lifts have stopped running.

The Powder Keg, Trapper Jerry’s, and the Chimney Corner are all some of the best places to wet your peak after a long day on the slopes. There’s no shortage of food, drink, and good times when it comes to the après-ski scene at Banff.

Big White is one of the best spots for families, so you can definitely find some solid family après-ski activities here. There are plenty of places for food, drinks, live music, and games. Snowshoe Sam’s has also been named the best ski bar in the country.

Austria is home to some immense après-ski parties. It is very often described as the biggest party scene in all of skiing. I mean, they invent the schnappski (shotski). What else would you expect?

St. Anton is one of the most popular Austrian resorts, and the après-ski is a big reason for this. Here you’ll find huge piste-side parties and a lot of people ready to party hard.

Ischgl has a more upmarket vibe than other places in Europe and even Austria. This place is the home to seemingly endless waves of pulsing music, cold beer, and even colder shots. You’ll also receive great service at some of the best après-ski bars in the world.

Italy is generally more relaxed with its après-ski activities than its European counterparts, but you can definitely still find raging parties in some places. Although, canapes and wine are a common sight in most places.

That being said, Livigno is a great place for those wanting a wild après-ski party. There are about 150 bars dotted around the town, all of which have a special duty-free status that should be enjoyed as much as possible when visiting.

The French are not to be trifled with when it comes to the quality of their après-ski. They did invent it after all. La Folie Douce and similar spots are the unofficial kings of après-ski in France.

Val Thorens in France is another great après-ski location. With a huge number of bars that teem with party-goers, this town goes strong all night. Singing and dancing are part and parcel of the experience.

Les Deux Alpes boasts a huge après-ski scene as well. There are a whopping 45 bars and 8 nightclubs at the resort. That means you’ll be truly spoiled for choice, whilst never going wrong.

Queenstown has a number of places that serve as awesome après-ski spots. The Rhino’s Ski Shack and Yonder should definitely be paid a visit when it’s time to unwind after a long day of skiing. Live music, warming fires, and cold drinks are all on the menu at these spots.

Cardrona Hotel is also one of the best après-skis in the world, making it a must-visit for anyone skiing that side of the world.

What is Après-ski Attire?

The whole point of après-ski is to continue the good times, albeit off the slopes. One part of this is the very relaxed and welcoming vibe you’ll find at most locations.

Coming to après-ski straight off the slopes, donned in all your ski attire is completely normal. There really is no dress code, so come in whatever’s warm and comfortable.

One thing you should remember is to keep your boots on and your skis or snowboards outside. Taking your boots off after a long session on the slopes is definitely not welcome at après-ski. Bringing your gear is also a no-no as it creates unwanted clutter

Why is Après-Ski So Popular?

Après-ski is so popular for two main reasons. Firstly, people that are at a ski resort are generally in a vacation mindset and want to get the most out of their trips.

People want to make the best memories possible for when their vacation ends. Once the lifts have stopped for the evening, you still have a lot of time to enjoy yourself and make cherished memories.

The second reason is that après-ski is just so fun. Most people like to go to a bar or restaurant with friends even when they’re not on vacation, so it makes sense this carries over to when on the slopes.

For anyone that hasn’t yet experienced après-ski, you’re missing out on a huge part of skiing. It serves as a great way to unwind and relax after a long day on the slopes, while also providing the opportunity to make lasting friends.

Its popularity came as a result of the need for things to do once the lifts have closed for the evening, leaving skiers with few options.

Although après-ski is typically a party affair, many ski resorts offer more family-friendly options that will keep the good times going for the whole family.